I recently came across something that surprised me about Cullen/Frost Bankers (NYSE:CFR). If you're interested in its stock, I suspect you'll find it interesting too.

But first, some background information

Cullen/Frost is based in Texas and focuses heavily on the energy industry. This is great when oil prices are high because it increases loan demand and decreases defaults. But it's the opposite when energy prices drop, which has been the case since the middle of 2014. 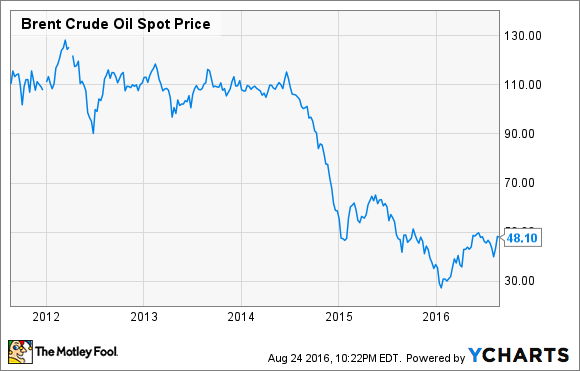 Low oil and gas prices have made it difficult if not impossible for many companies in the energy industry to make their loan payments. This is why headlines announcing bankruptcies of energy companies have been common over the past year.

This impacts banks that lend to energy companies because more of the companies are then either late on payments or default altogether.

For its part, Cullen/Frost has had to quintuple since 2012 the amount of money it sets aside each year to cover anticipated loan losses. It set aside $10 million four years ago but $52 million in 2015.

And it's trending higher this year.

The point being, combined with the ultra-low-interest-rate environment that's squeezing lending margins, there are multiple headwinds working against Cullen/Frost right now.

It was thus no surprise that, by the middle of January, with oil prices below $30 a barrel, Cullen/Frost's share price had dropped nearly 50% from its former high. 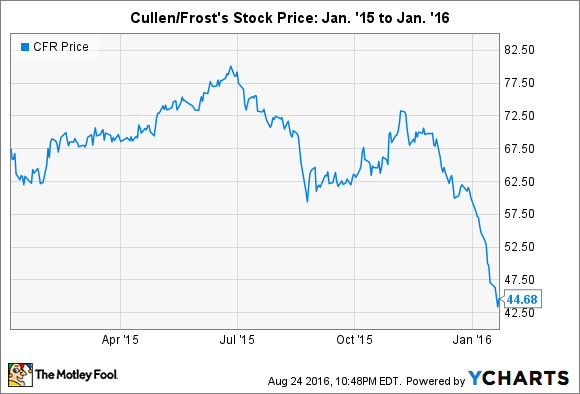 What surprised me about Cullen/Frost

Based on all of that information, I had assumed that Cullen/Frost's stock was still in the sewer, so to speak. But when I recently sorted a collection of large banks by their stock values, I was surprised to see that Cullen/Frost wasn't near the bottom.

It just so happens, in fact, that it was closer to the top.

According to a screen I ran on YCharts.com, its shares trade for 1.5 times book value. That ranked it fourth out of the 23 bank stocks on the list. Above Wells Fargo.

Here's some additional perspective: about a third of the banks in the assortment (members of the KBW Bank Index, less First Niagara Financial Group, which merged into KeyCorp), had book values below 1.0. That includes Bank of America and Citigroup, both of which trade for less than 0.7 times book. Even a bank as rock solid as JPMorgan Chase trades for only 1.0 times book.

It's not like interest rates or energy prices have recovered. Oil is back to around $50 a barrel, but it's nowhere near the $100-plus prices from 2014 and earlier.

Meanwhile, Cullen/Frost's shares are up nearly 70% since bottoming out in January. 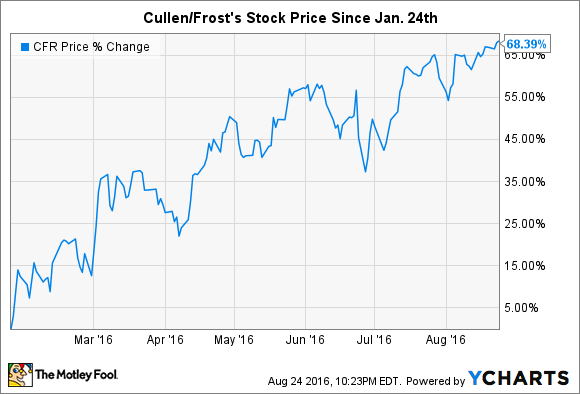 What's fueled this rally? You got me.

But the one thing I do know is that Cullen/Frost is no longer a contrarian play on higher oil prices. Its stock has already recovered.