Retirees can benefit from owning top-tier stocks generating steady eddy income, but with thousands of stocks to choose from it can be tough figuring out which companies are best to include in portfolios. With that in mind, I dug into the details on dozens of top stocks to figure out which might be best for retirees and settled on these three stocks. Read on to find out if they might be right for your portfolio.

No. 1: An energy powerhouse goes on sale

Yes, oil and gas prices have nose-dived from their peak and that's not a good thing for oil and gas producers, but the drop in prices and corresponding tumble in share prices may be presenting an opportunity to buy one of the best energy companies in the world on sale.

ExxonMobil (NYSE:XOM) is an energy Goliath with a global presence, but it's business is bigger than simply finding and extracting oil and gas from the earth. The company also operates a refining business that turns oil and gas into products like gasoline, and it runs a big chemicals business, too.

The company's upstream and downstream exposure to energy markets doesn't make it immune to falling oil and gas prices, but it does offer insulation to earnings from commodity pops and drops, which gives it a big advantage over small- and mid-sized oil and gas producers.

The ability to generate earnings in even the most difficult times provides a level of consistency that's very shareholder friendly. Since the merger of Exxon with Mobil, the company's reduced its share count by 40% and over the past 10 years its dividend payout has increased by an average of 10% per year. In fact, despite the ups-and-downs of its market, ExxonMobil has increased its dividend payment in 34 consecutive years. That's an enviable track-record that retirees ought not ignore, especially given that earnings could grow significantly in the coming decades as global energy demand climbs.

No. 2: A new twist on a familiar company

Microsoft Corp. (NASDAQ:MSFT) is best known for it's Windows operating system, but Windows accounts for an increasingly small share of this company's sales and profit. Instead, it's the company's opportunity to generate revenue via online software that makes this company a top stock for retirees to buy.

The company's Office 365 provides businesses with online access to some of its most popular productivity tools, such as excel, and revenue for Azure, the company's app platform, is taking off, too. Commercial Office 365 sales were up 54% in Q2 from a year ago in Q2 and Azure's revenue doubled in the same period. Overall, Microsoft is targeting $20 billion in commercial cloud revenue in 2018.

Microsoft's top- and bottom-lines are already beginning to enjoy the benefit of the company's shift. Global sales of $22.6 billion in Q2 were $500 million higher than industry watcher's forecast and earnings per share in the quarter outperformed Wall Street watchers estimates by $0.11. Assuming Microsoft continues to grow sales in its high-margin cloud businesses, it's profit should continue to impress.

Microsoft also makes sense for retirees because it boasts one of the best balance sheets in technology. The company is sitting on $113 billion in cash exiting June and that gives it plenty of financial firepower to do deals that could drive sales higher in the coming years. Microsoft proved that point earlier this summer with its $26.2 billion acquisition of LinkedIn (NYSE:LNKD.DL), the largest business-oriented online networking website. LinkedIn will add nearly $4 billion in annualized sales to Microsoft immediately and Microsoft expects that LinkedIn will begin contributing to its bottom-line performance beginning in fiscal year 2019.

If the company's reincarnation and financial firepower aren't convincing enough reasons to buy, you might also want to remember that Microsoft is a consistent dividend payer. Currently, its shares are yielding a market-beating 2.5%.

A restructuring by CEO Ian Reed has made Pfizer leaner and recent acquisitions and a commitment to cancer research are establishing the company as a top player in cancer treatment.

The company's oncology sales grew 54% in the past year to $1.1 billion last quarter and sales in the indication could be heading much higher. Sales of Ibrance, a breast cancer drug, are surging. Second quarter Ibrance sales were $514 million, up from $140 million in the same quarter a year ago. The company also saw quarterly sales of Xalkori, a lung cancer drug, grow 15% to $137 million in the period.

In addition to sales growth from those drugs, the company significantly expanded its cancer footprint last week with its announced acquisition of Medivation (NASDAQ:MDVN). Medivation is the company behind Xtandi, a commonly used prostate cancer drug, and industry watchers are targeting Xtandi sales of $2.8 billion this year. Since Xtandi is being studied for use earlier in prostate cancer treatment and it's also being studied in breast cancer patients, its peak sales potential could be much higher than its current sales pace. In addition to adding Xtandi to its lineup, the acquisition also nets Pfizer two other cancer drugs in Medivation's pipeline that could eventually add hundreds of millions of dollars in sales.

Pfizer's targeting $51 billion in sales for this year, up from $49 billion in sales last year, and it expects to deliver earnings per share of $2.38, up from $2.20 last year. If Pfizer can meet or exceed those targets it will mark the first full year of top-line sales growth since 2012. 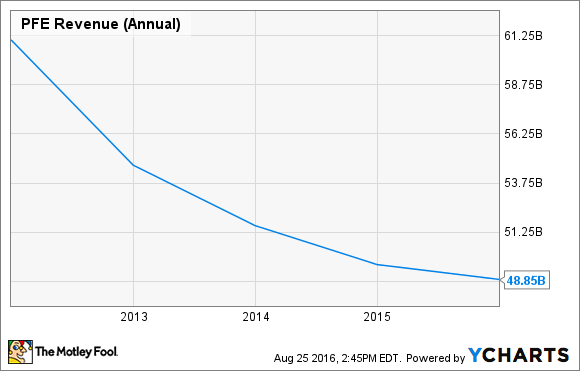 Because Pfizer's sales and profit are ticking up again and acquisitions offer additional profit opportunity, it could be worth tucking this stock into retirement portfolios. The company has increased its dividend payout by about 50% since 2012 and improving finances should provide for even greater increases in the future.