Ambarella (NASDAQ:AMBA) will report quarterly earnings on Sept. 1. With shares rising ahead of the report, investors are pricing in a hefty dose of optimism. But is it warranted? What should investors be looking for in the report next week?

Last summer, Ambarella shares more than doubled and peaked at over $120 a share. The company's stock was quickly humbled, though, settling 75% off the highs in February of this year. The cause? A sharp slowdown and subsequent fall in sales for the company's high-definition video capturing hardware forced investors to reevaluate future expectations.

Surely investors have learned their lesson when it comes to piling in based on hopes and dreams for Ambarella, right? Well, maybe not. The stock is up over 70% since the last reported quarter back in June. 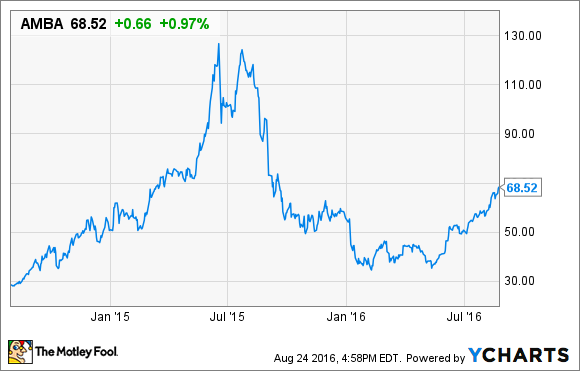 The reason this time? Expectations for a rebound in sales and profits are high after a year of disappointing figures, and the company also announced a $75 million share repurchase program that commenced in May and is set to wrap up by the end of October.

Ambarella took a hit in the past year as demand for wearable cameras declined, especially with key partner GoPro. Also contributing to the troubles earlier in the year was the April 14 earthquake in Japan, shutting down production at another business partner, Sony. Production is supposed to resume uninhibited by the end of August.

Despite the wall of worry, shares are rising unabated going into the next report. This is quite the feat, especially considering Ambarella's chief financial officer, George Laplante, gave no guidance for revenues for the second quarter, because of "the wide range of potential outcomes."

What to look for in the report

Investors are obviously looking for a much-needed uptick in sales, or at the very least hints that growth will resume soon. Though sales remained weak in the second quarter for wearable-camera maker GoPro, the company issued optimistic remarks about the second half of the year. After a year of a slump from the wearable-cameras market, some respite in that area of business will be important for Ambarella as well. 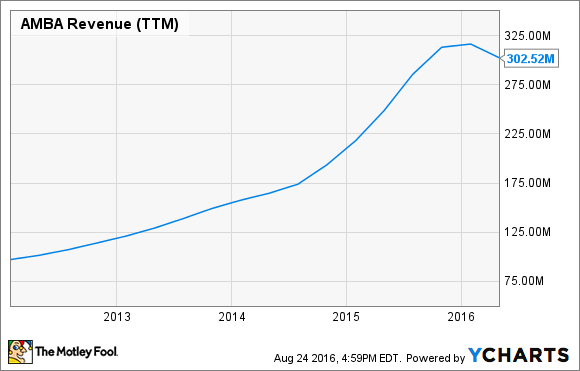 Though outlooks for revenue and profit were eliminated for the second quarter, revenue guidance for the full year was given. The company is looking for revenue to come in flat compared with last fiscal year. With sales slumping 19.5% during the first quarter and continued pressures during the second, that would imply a strong finish during the back half of the year.

However, in my opinion, growth updates from specific segments of Ambarella's business will be even more important to focus on. The company has been working at diversifying revenues away from action cameras, but that area of business still makes up the majority of its top line. In answering an analyst question during the last quarterly report, Laplante said that 40% to 45% of revenue is derived from Sony alone, which orders hardware from Ambarella to make image sensor equipment.

Drones, security cameras, and automotive cameras have been key areas of expansion, but the company still has a lot of work to do to. Be ready to get an update on progress to see if the newer segments are catching up with Ambarella's primary enterprise.

As noted earlier, a $75 million share repurchase has been under way. Investors will no doubt be interested in an update on the progress, including the dollar amount of shares bought over the past three months and how much more is in the works for the remaining three months of the plan.

Investors should prepare themselves for a disappointing second-quarter performance. Management has already said as much, given the wall of worry that cropped up during the spring and early summer months.

What investors should focus on instead is the future. If Ambarella issues a positive outlook for the rest of the year, it would be much needed sign that things are on the mend.