Over the last few weeks, analysts at various companies including Credit Suisse, Keybanc, and more have been upgrading Shopify Inc (NYSE:SHOP) stock to "buy" or "outperform." The analysts have different reasons for the rating, but all of them believe Shopify could be a great way to invest in the growth of e-commerce. Here's what the analysts are saying now and why Shopify may be a great long-term play.

What the analysts are saying

Monika Garg from Pacific Crest Securities raised her target on Shopify from $40 to $43, saying, "We believe Shopify is one of the best ways to invest in e-commerce growth. Given the company's ample growth opportunities, Shopify warrants a premium valuation, in our view." Keybanc analysts raised their price target from $40 to $43 as well, saying, "Shopify continues to add new merchants and is also migrating customers to higher pricing tiers, and the increased pricing appears to have no impact on this trend."

Credit Suisse analysts have been even more bullish, giving the stock a $46 price target based on a recent stock offering that will add capital for future product development and marketing. As of the time of writing, there are no analysts with a sell rating on Shopify, according to Yahoo! Finance.

Shopify labels itself the leading cloud-based, multichannel commerce platform, allowing merchants of all sizes, from solo-entrepreneurs to companies like Tesla Motors, the LA Lakers, and the New York Stock Exchange to design, set up, and manage their online stores. Shopify has over 300,000 customers across 150 countries and has facilitated more than $20 billion in sales.

It the recent second quarter, Shopify sales soared 93% year over year to nearly $87 million. Even though net loss was an even larger amount than the same quarter last year, down to -$8.4 million, that was better than analysts expected.

The reason for the rising sales but growing net loss is Shopify's expensive investments in business and customer development -- which so far seem to be paying off in terms of new customers. Subscription revenue specifically was up 72% year over year during the quarter, and the number of current merchants is up to 300,000 from 175,000 this time last year.

Shares of the company have nearly doubled since February and are now above $40. However, the stock is barely above where it was at this time last year, right before the stock price was cut in half on growth concerns. Will the stock continue to climb, or is it set for another fall? 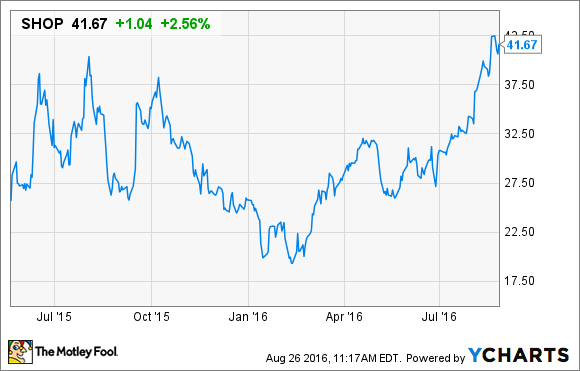 There are various reasons to believe the company will continue to grow rapidly. First, the expected net loss for 2016 is being revised for the better. Shopify raised its full-year 2016 revenue guidance to $367 million on the high end -- what would be a 79% jump over 2015. Even though Shopify still expects an operating loss, it revised that loss to $37-$41 million, compared to $41-$47 million as previously guided.

Then there's the recent successful stock offering completed August 22, which adds a needed influx of cash going forward. Over the trailing 12 months, Shopify has worked with a thin operating cash flow of just $11 million. The more than $245 million raised from the recent stock offering will help to drive development, while providing cushioning to weather net losses for a few more years.

Shopify is still bleeding money, with no timeline of when it's likely to start posting a profit -- much less one that makes up for its lofty price of 17 times book value. Still, many of the bullish analysts point to the early days of Amazon, another e-commerce company that failed to post a profit for years even though it grew revenue rapidly. Similar to Amazon, Shopify is reporting a loss even though sales are soaring because the company is plowing so much money into business and customer development. The company is still tiny compared to Amazon, but it could potentially be on the same growth path.