With the Dow Jones Industrial Average, the Nasdaq Composite, and the S&P 500 all at or close to all-time highs lately, there aren't a whole lot of companies out there with low stock prices. That is especially true of dividend aristocrats, that special subset of stalwarts that have been able to increase dividend payouts for more than 25 years. If you look deep enough, though, there are a few industries that aren't doing as hot as the broader indexes may indicate. Three companies in particular on the dividend aristocrat list -- Emerson Electric (NYSE:EMR), Nucor (NYSE:NUE), and ExxonMobil (NYSE:XOM) -- haven't had as good a time as others as of late. Let's take a look at whether today's depressed stock prices indicate it's time to buy.

Putting things in the right lens

Before we get into this, there is one thing to keep in mind. "Beaten-up stocks" is a relative term based on your investment time horizon. If you were to look at the performance of each of these three companies so far in 2016, it would be hard to argue that these stocks are beaten up or depressed since all of them have soundly beaten the S&P 500 in 2016. 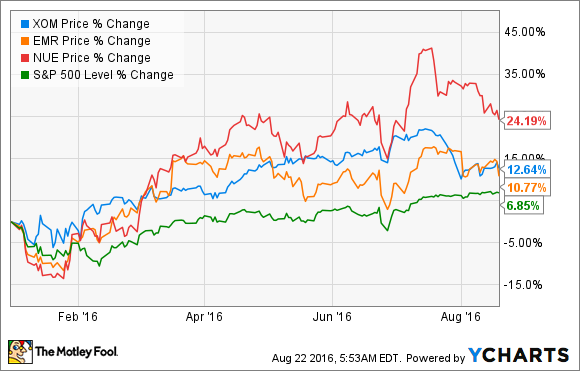 The thing is, though, that all of these companies are generating these pretty strong performances because they are starting from pretty weak starting points. Over the past five years, all three have wildly underperformed the S&P 500 on a total-return basis. 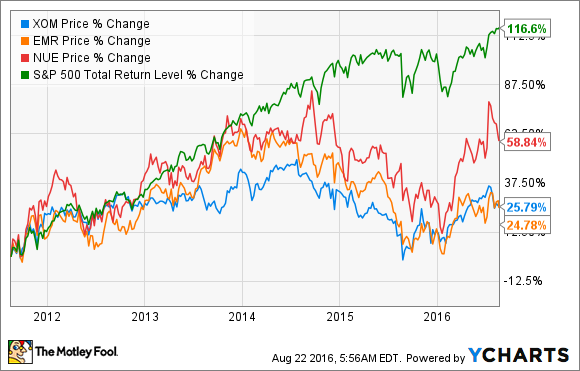 All three have underperformed for various reasons, so let's see if the market for the three stocks is improving such that they will be able to reverse this underperformance over the next few years

All three of these companies are in cyclical industries. For ExxonMobil and Nucor, this is a little more obvious since they deal with oil and gas, and steel, respectively. For ExxonMobil, the decline in oil and gas prices has been well-documented over the past two years thanks to a glut of supply and low prices. ExxonMobil and other integrated oil and gas companies have had the double issue of trying to pay for multibillion-dollar development projects and needing to take on debt to pay for them and their generous dividends.

Nucor has been dealing with a similar problem. Throughout the naughts, there was a rapid increase in steelmaking capacity to satisfy China's voracious appetite for steel. As China's demand started to wane, though, the market found itself with a significant capacity oversupply, and it has caused headaches across the world, with many countries dumping steel at below production cost. This weighed heavily on Nucor's profits for the past half-decade.

For Emerson, the cyclical decline has been less pronounced, but it's there as well. Stagnant economic growth in Europe and slowing demand from major growth markets, such as China, have led to a 15% decline in revenue over the past five years. The company has been able to make up some of the difference by cutting costs and improving margins, but this can only make up for so much revenue loss.

The thing is, all three of these companies have seen commodity cycles before over the years and have dealt with them. ExxonMobil is known in the oil and gas industry as the company that consistently invests through the industry cycles and has done so recently with the acquisition of a natural gas company in Papua New Guinea with some very promising reservoirs. Similarly, Emerson is using the down cycle in industrial manufacturing to make a $3.15 billion acquisition of Pentair's valve business.

Not to be left out, Nucor also has improved its manufacturing capacity in this down market by starting up a new, innovative steelmaking facility in Louisiana that will also take advantage of America's cheap natural gas by using gas as an energy source rather than the typical metallurgical coal the industry has used for decades.

When you couple these moves with signals that we're starting to see that their respective markets are starting to turn, it looks as though the three are poised to do well over the next few years.

Like I said, these stocks aren't at the cheapest they have been recently, thanks to the gains in 2016, but when you compare these companies on a historical basis, their shares still look pretty cheap. For example, shares of ExxonMobil trade at 2.1 times tangible book value, which is well below the stock's 20-year historical average. Also, these companies' dividend yields are at or near highs over the past few years. 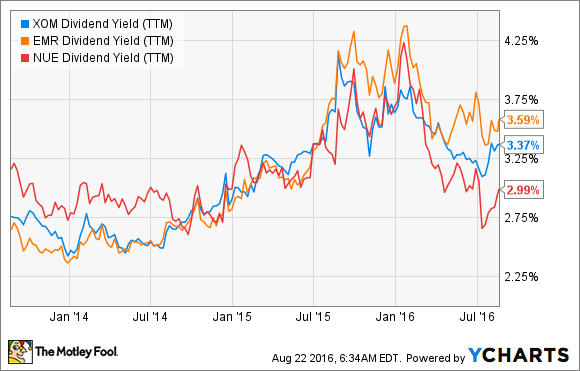 There may not be a lot of bargains among the dividend aristocrats today, but shares of ExxonMobil, Nucor, and Emerson Electric certainly look like some of the better bargains among consistent dividend-paying stocks. If you are looking to add a consistent dividend payer to your portfolio, these three may be great ones to start off with, based on their relatively favorable valuations.