What: After surging last week, crude oil prices gave back some of those gains this week. By Friday afternoon, crude was down about 2.7% for the week due to an unexpected build in oil inventories and growing skepticism that OPEC's talks to freeze production will amount to anything.

Needless to say, those sinking crude prices weighed on oil stocks. That said, it was not the only weight pushing down this week's biggest losers. Which, according to data from S&P Global Market Intelligence, included California Resources (OTC:CRC), DHT Holdings (NYSE:DHT), Resolute Energy (NYSE: REN), Baytex Energy (OTC:BTEG.F), and Ensco (OTC:VAL): 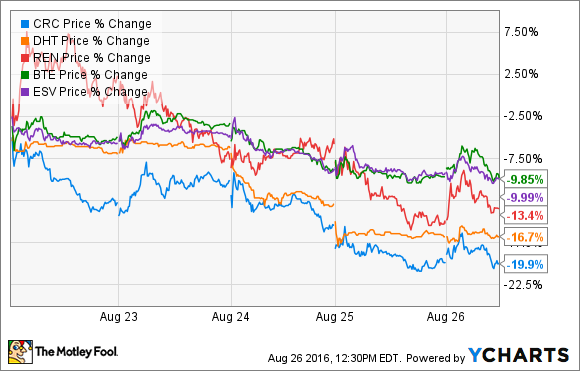 So what: Driving California Resources' sell-off, aside from weaker oil prices, was a subtle change in its credit outlook by Moody's. The rating agency changed the California oil company's probability of default rating to Caa2-PD/LD, which implies that its credit is "judged to be speculative of poor standing, subject to very high default risk, and may be in default on some but not all of their long-term debt obligations." That change was in response to the company repurchasing senior notes through a tender offer and a new $1 billion term loan. While those repurchases have the potential to reduce California Resources' net debt by 11%, the company "continues to have elevated debt and its interest burden has increased," which puts it at a higher risk of default, especially with oil remaining volatile.

A downgrade by Morgan Stanley was the primary driver of crude oil tanker DHT Holding's sell-off after the bank cut the company from overweight to equal weight. Further, it values DHT Holdings at a discount to its NAV of $5.50 to $6 per share because of the challenging near-term outlook for the tanker sector. In fact, it sees weaker tanker demand wiping out DHT Holding's earnings in 2017 and 2018, though it does believe the company will remain cash flow positive.

Permian Basin driller, Resolute Energy slumped after its founder and CEO Nicholas Sutton said he would retire at the end of this year. At that time Sutton will become the Executive Chairman and current COO Richard Betz will take over as its top executive. Also weighing on shares was a report by The Street Sweeper, which laid out a bearish case for the stock.

Meanwhile, slumping crude prices were the primary weight driving down both Baytex Energy and Ensco. In Baytex Energy's case, with crude back down to around $47 a barrel it is putting downward pressure on the company's cash flow. In particular, Baytex Energy's Canadian-heavy oil properties need oil to be $45 per barrel at Lloydminster and $46 per barrel at Peace River to deliver breakeven drilling economics. Ensco, likewise, needs oil to be much higher for its offshore customers to be economically incentivized to drill more wells. Unfortunately, because oil is still stubbornly below $50 a barrel, Citigroup reduced its forecast with the bank not projecting any deepwater contract awards in the second half of this year. Further, it does not see the offshore market improving until 2018.

Now what: With crude oil backing away from $50 a barrel, it is returning the market's spotlight to areas of trouble. In particular, several drillers still have too much debt, while others just aren't generating much cash flow at current prices. Because of that, the industry still has work to do to pull itself out of the mess it created by taking on too much debt to drive production well beyond the market's need.