Warren Buffett is happy to invest in companies that regularly increase dividends and repurchase shares. Image source: The Motley Fool.

Berkshire Hathaway, Inc. (NYSE:BRK.A) (NYSE:BRK.B) bought 3.2 million more shares of Phillips 66 (NYSE:PSX), according to the company's most recent SEC filing. That puts Berkshire's total holding at nearly 79 million shares, good for a 15% stake in the refining and petrochemicals giant. In only a few years' time Phillips 66 has become one of Berkshire Hathaway's biggest holdings, worth $6.1 billion at recent share prices.

So what does Berkshire Hathaway CEO Warren Buffett  like so much about Phillips 66? In short, it's got a lot of the characteristics that Buffett looks for in a company, and they're the kinds of things that have typically meant fantastic long-term returns for Buffett and Berkshire's shareholders.

Warren Buffett has said the best long-term investments are often businesses that have strong competitive and economic advantages over their competitors, which they regularly work to strengthen. Phillips 66's refining business certainly has this characteristic.

Refineries, as long as they are well-maintained and run at a high capacity, can generate huge cash flows, which on the surface can make them very attractive businesses. But at the same time, building a new refinery costs billions of dollars, and growth in demand for refined products is relatively low. In other words, it's just not worth the start-up costs to build a new refinery, based on the limited need. Combined, these two things make a relatively high barrier to entry in the refining business, helping protect Phillips 66 and its competitors from any new entrants into the market.

There's more to it for Phillips 66, which operates some of the most advanced refineries in the world. This has given the company another advantage when it comes to finding low-cost crude oils to refine that others can't process. By leveraging its refineries to process cheaper inputs, the company has historically generated a wide spread between what it pays for crude oil, and what it can sell refined products for.

At the same time, the company's management has proven to be good at putting those cash flows to use. Which brings us to the next aspect of Phillips 66 that's very "Buffett."

Warren Buffett has called capital allocation one of a CEO's most important jobs. And that's especially the case for a company like Phillips 66, whose largest business -- refining -- is also one that could easily gobble up capital investments without necessarily generating big returns on that investment (see "economic moat").

Phillips 66 CEO Greg Garland recognizes this; since his company was spun out of ConocoPhillips in 2012, Garland has focused its growth investments on the midstream and petrochemicals businesses -- only spending on the refining business to maintain it and improve operations, versus building more refining capacity at a lower rate of return.

There's more to the story than just how the company spends money on growth projects; it's just as important to understand how the company doesn't spend it. In other words, what does management do when it generates more profits than the business really needs to reinvest? Phillips 66 does two things that Warren Buffett especially loves: buys back shares, and pays a dividend it can easily afford and can steadily increase. 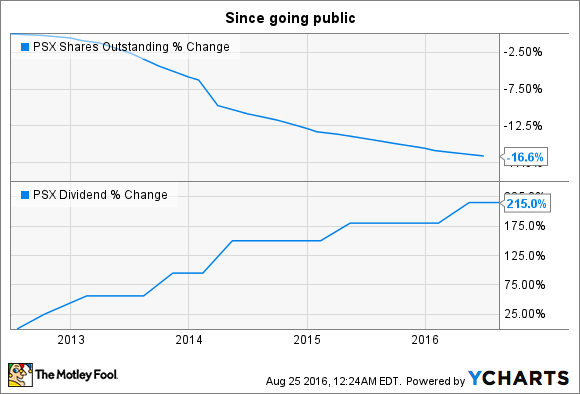 Since becoming a stand-alone company in 2012, Phillips 66 has repurchased about 100 million of its shares, almost 17% of shares outstanding. How does that translate in value to investors? Each share of Phillips 66 is worth about 20% more of the company than it was in 2012.

At the same time, the company has increased its dividend 215%. But even after such a sharp increase over the past several years, the company has still paid out less than 40% of earnings in dividends over the past year, giving it a pretty broad margin of safety to continue paying out at current levels, and even increasing payments further.

Berkshire Hathaway will receive nearly $200 million in dividends from Phillips 66 this year alone.

Phillips 66 is pretty close to the ideal Buffett investment:

These things are no guarantee Phillips 66 will be Berkshire Hathaway's next big stock winner -- there's no such thing as a "can't miss" stock. But if there's one thing Buffett has demonstrated repeatedly over the decades, it's that investing in companies with these key traits has generated billions in returns for Berkshire Hathaway's shareholders. That's certainly in favor of Phillips 66 working out in the long run.