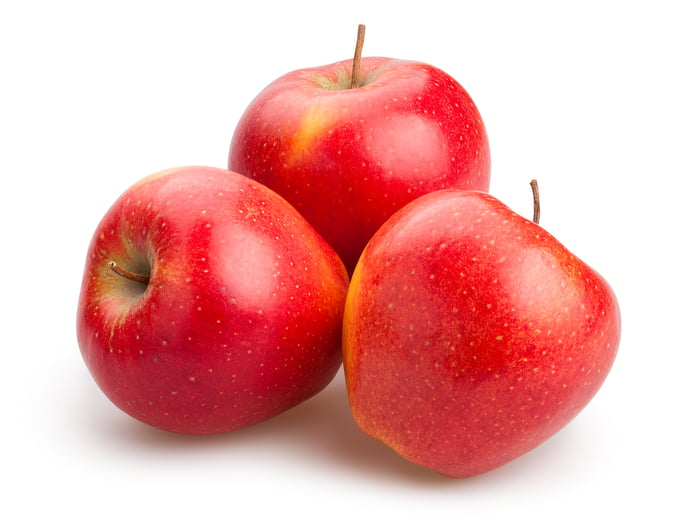 As one of the most successful companies in history, investors may understandably wonder whether aging tech giant Apple (NASDAQ:AAPL) can deliver the same juicy returns for which it's so famous.

Though still certainly a force in the investing world, today's Apple relies on a more diverse playbook, including share buybacks and dividends to generate returns for its shareholders, rather than relying solely on torrent earnings and profit growth, as it once did. Case in point, Apple has emerged as something of a share buyback and dividend powerhouse since initiating its capital return program in 2012.

Thanks to its truly monumental financial resources -- $159 billion in net cash and investments as of its most recent quarter -- Apple has developed an impressive track record of returning cash to shareholders via buybacks and dividends. Here's a quick snapshot of Apple's share repurchase history over the past four fiscal years.

As of its most recent quarterly report, Apple has utilized roughly $127 billion of the $175 billion the company has earmarked for stock buybacks. That's an absolutely incredible about of capital committed to repurchasing Apple's shares, especially considering the company's entire market capitalization of $573 billion. It demonstrates how Apple can utilize its massive financial resources to continue to create returns for its investors, even if its days of breakneck growth lie behind it.

It also bears noting that Apple has allocated a disproportionate amount of its capital return program toward stock buybacks instead of dividends. In fact, Apple has earmarked 68% of the $250 billion in its capital return program specifically to fuel share buybacks. As such, Apple's clear preference toward stock buybacks also suggests they contain some kind of advantage over dividends. Why is that?

Why do companies buy back stock?

With chapters of corporate finance textbooks dedicated to the subject, breaking down the advantages and drawbacks of stock buybacks, especially when compared to cash dividends, can quickly grow esoteric. I don't want to put you to sleep, here, but it's handy for investors to have a general framework for why companies pursue stock buybacks, so let's quickly review.

At their most basic, buybacks are one of two principle methods through which a company can reward its shareholders with their excess cash flow; the other is dividends.

Additionally, stock buybacks carry an additional tax advantage. Investors who own a stock for more than a year are taxed at the lower long-term capital gains rate when they sell their stock compared to dividends, which are taxed as ordinary income. So as a general rule of thumb, stock buybacks help increase a stock's price and typically result in a lower tax bill when investors sell their shares.

Stock repurchases can also be viewed, in theory, as a sign that a company sees its shares as undervalued, though this can prove tenuous in practice. Companies are aware of this exact effect, and some will attempt to use this "signal" to support their stock price. For example, the now-defunct Lehman Brothers famously instituted a stock buyback in late January 2008, ostensibly in an attempt to instill confidence in its rickety stock price. Ten months later, the company no longer existed. To be sure, many companies use buybacks to reward their investors in a rational and ethical manner, but it's important to caveat that some companies use it for more self-serving aims as well.

Either way, at a high level, stock buybacks should be thought of as a more tax-efficient way for a company to reward investors than dividends in cases when its shares are undervalued. Companies with low P/E ratios, like Apple, can benefit tremendously from stock buybacks. But it's important to note we're just scratching the surface on this important and somewhat complex topic.