Home Depot (NYSE:HD) is one of the busiest retailers in America right now. The home improvement giant on Aug. 16 announced second-quarter earnings results that trounced national peers and even left industry rival Lowe's (NYSE:LOW) far behind.

CEO Craig Menear and his executive team held a conference call with investors to put those results in perspective. Here are a few important points that management made in that discussion.

We continue to see broad-based growth across our stores; both ticket and transactions grew. All of our merchandising departments posted positive comparable-store sales.
-- Menear

Home Depot's comps grew 5%, marking a slowdown from the prior quarter's 7% spike. Yet the retailer extended its market share lead over Lowe's, which improved comps by just 2% in the second quarter. Wal-Mart Stores (NYSE: WMT) managed a slight comps increase and Target's (NYSE:TGT) comps declined thanks to its first customer traffic dip in two years.

Growth was balanced between higher customer traffic and a solid boost in average spending per customer as Home Depot logged an 8% jump in big-ticket ($900 or greater) purchases.

Management estimates the addressable U.S. consumer market at roughly $180 billion, but believes it has a major opportunity to dominate the professional home improvement market, which is worth $120 billion. The retailer made good strides toward that goal as sales to professionals rose at a faster pace than consumer sales, pushing categories like industrial lighting, fencing, interior doors, and power tools to double-digit comps.

Our online business had strong growth in the quarter with double-digit traffic growth and improvement in conversion. Mobile and tablet are over 50% of our traffic and are important tools that our customers use to engage with our products, our stores and our associates.
-- Decker

Home Depot posted 19% higher online sales as that channel grew to nearly 6% of the revenue base. This success demonstrates how Home Depot is doing a better job than peers at defending against e-commerce rivals. Target, for example, has been plowing investments into its digital infrastructure and yet its online business is still just around 3% of sales.

Home Depot already has a popular program for customers to buy online and pick up in stores, which represented nearly half of its digital business last year. Meanwhile, the company is on pace to roll out the option to get delivery directly from stores over the next few months, which should cut wait times down even further.

We continue to see positive signs in the housing data which we believe serve as a tailwind for our business.
-- Menear

The home improvement industry usually tracks the broader economy, which hasn't managed especially strong growth lately and isn't expected to perk up over the second half of 2016. In fact, Home Depot executives noted a slowing of growth projections for U.S. GDP in the next six months.

However, the fundamentals of the industry suggest a long runway for growth ahead. Spending on home improvement is up sharply since the housing crisis years when it was running at a $400 billion annual pace, but is still far below the peak $900 billion mark it hit in 2006:

Continued steady recovery in this industry has management confident that they can grow comps by 5% this year on their way to an estimated $100 billion of annual revenue by 2018 -- from below $90 billion today. 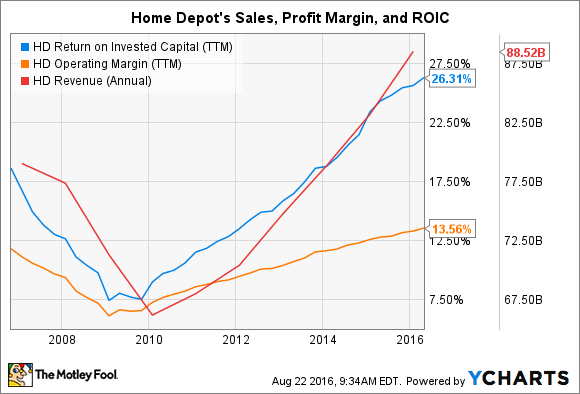 Executives project key efficiency measures, including operating margin (up to 14.5% from 13% last year) and return on invested capital (up to 35% from 28% last year) marching to new records over that same period. "We are encouraged by the strength of our core business as the U.S. housing market continues to recover," Chief Financial Officer Carol Tome said as explanation for why Home Depot affirmed its sales growth guidance and boosted its earnings forecast in the face of slower economic growth.

What Home Depot Inc. Has to Say About the Housing Market, Online Rivals, and More @themotleyfool #stocks $HD $TGT $LOW Next Article
Current