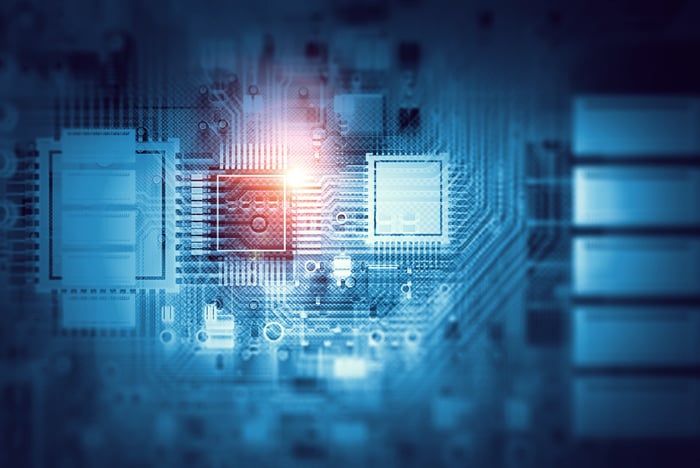 It's been a great year to be an AMD (NASDAQ:AMD) shareholder. The chipmaker's stock has risen nearly 170% year to date, strongly outperforming almost all of its peers and the broader market.

With the year more than halfway over, let's take a quick look back at some of AMD's best moves to date.

In June, AMD unveiled three new graphics processors: the RX 480, RX 470, and RX 460. All three are aimed at buyers on a budget, retailing for between $100 and $200. The flagship RX 480 is particularly notable, as it's able to power high-end virtual reality headsets, including the HTC Vive and Oculus Rift.

Almost half of AMD's 2016 rally has come in the wake of these new GPUs. The market for virtual reality headsets is projected to surge in the years ahead. Research firm IDC believes that nearly 65 million VR headsets will ship in 2020, up from fewer than 10 million this year.

AMD remains a secondary player in the market for GPUs, but along with rival NVIDIA, holds a duopoly over the space. Investors appear to like AMD's prospects, as the RX 480 could help it court consumers unwilling to pay for NVIDIA's more expensive silicon.

Retaining its lead in game consoles

About 60% of AMD's sales come from its enterprise, embedded and semi-custom segment. The bulk of that revenue is directly attributable to AMD's video games business. AMD's chips power all current-generation video game consoles, including the PlayStation 4 and Xbox One.

In the past, video game console-makers released new systems every five to six years. However, the industry appears to be in the midst of a major shift, with more incremental hardware releases occurring more often. That could benefit AMD's semi-custom business in the years ahead.

In addition to GPUs and chips for video game consoles, AMD has a significant CPU business. Unfortunately, its CPUs haven't been particularly competitive in recent years. Rival Intel (NASDAQ: INTC) dominates the market, particularly at the high end -- if you purchase a PC that retails for more than $600, there's a good chance it will be powered by an Intel chip.

But AMD could reemerge as a viable market participant as early as next year. AMD has been hyping its forthcoming "Zen" processor since 2015, but offered more concrete details this year.

"I'm excited to report that, in addition to conducting the first public demonstration of our next generation Zen-based processor at Computex in June, priority server customer sampling began in the quarter, and dual socket server platforms are now running at both our labs and our customers' labs," said AMD CEO Lisa Su on the company's July earnings call.

Earlier this month, AMD demonstrated its forthcoming Summit Ridge -- a processor aimed at high-performance desktop PCs and slated to arrive in the first quarter next year. Details remain scant, but Summit Ridge appears to offer performance on par with Intel's i7 6900K, one of the company's top desktop processors.

AMD's business improved in 2016. Last quarter, AMD reported adjusted operating income, up from a loss in the same quarter last year. But the gain was slight, and AMD remains unprofitable under generally accepted accounting principles. At the same time, its sales have risen only modestly, up 9% on an annual basis last quarter.

The bulk of AMD's share price appreciation appears to have been driven by investors' hopes for a brighter future. With Zen on the horizon and interest in VR heating up, AMD could see meaningfully improved financials in the years ahead, justifying its stock's rapid rise.