Within the ecosystem of large-cap drug stocks, AbbVie (NYSE:ABBV) and GlaxoSmithKline (NYSE:GSK) are easily top dogs when it comes to their respective dividend yields. AbbVie, for instance, sports a current yield of 3.45%, and Glaxo weighs in at a hefty 4.97%.

Over the past two years, however, these two companies have approached the loss of patent protection for their top-selling products in very different ways. AbbVie, facing the patent expiration of its anti-inflammatory medicine Humira at the end of 2016, decided to go on a spending spree in attempt to become a major player in the high-growth oncology drug market.

Glaxo, on the other hand, chose to build out a basket of newer respiratory medicines like Anoro and Breo Ellipta and bolster its footprint in the vaccine and HIV markets to offset falling sales of its asthma medication Advair.

With these markedly different solutions to the patent cliff in mind, let's consider which of these two dividend-paying drug stocks is now in the best position to create value for shareholders going forward.

Will AbbVie's roll of the dice on Imbruvica pay off?

AbbVie took a lot of heat from analysts and shareholders alike for paying a whopping $21 billion to acquire half the commercial rights to blood cancer treatment Imbruvica. As a reminder, Johnson & Johnson owns the other half of the drug's revenue, but J&J still balked at paying such a rich premium to capture the remaining 50%.

Even though Imbruvica is forecast to rake in around $6.5 billion in global sales by 2021, making it one of the best-selling cancer drugs, that figure doesn't seem to justify AbbVie's acquisition of Pharmacyclics for such a ginormous price tag, especially with J&J still in the picture.

Making matters worse, this deal has taken a huge toll on AbbVie's balance sheet. Put simply, AbbVie's debt-to-equity ratio has ballooned over the last year as a direct result of this acquisition, along with the follow-on $5.8 billion buyout of Stemcentrx for its experimental small-cell lung cancer drug Rova-T, causing credit agencies like Moody's to downgrade the company's rating. 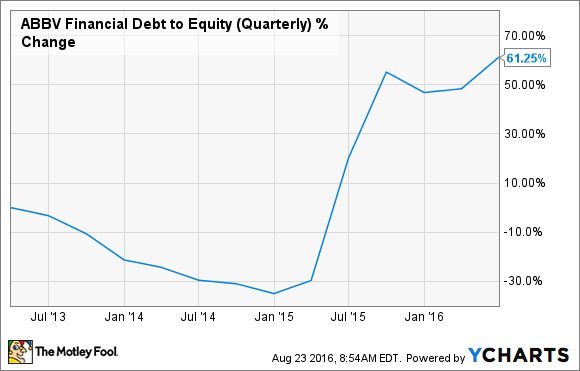 The bottom line is that if Imbruvica fails to turn into the megablockbuster everyone expects, due to either a clinical setback or the entrance of superior BTK inhibitors, AbbVie may not have the wiggle room to change direction due to its highly leveraged balance sheet. And these rather pricey deals for Pharmacyclics and Stemcentrx seem to imply that the drugmaker doesn't have much confidence in its ability to defend Humira's market share once it goes off patent.

Does Glaxo have a franchise-level drug in its arsenal?

Perhaps the main takeaway from Glaxo's recent second-quarter earnings release is that Advair remains the drugmaker's most important product, making up 56.8% of all respiratory revenue and 23% of total pharma sales during the three-month period. That's not particularly good news, since Advair sales are expected to continue to fall by mid- to high-single-digits each quarter moving forward, and the introduction of generics inside the U.S. in 2017 could accelerate this decline.

But there is a silver lining. Glaxo reported that Breo Ellipta's sales have started to pick up in a big way as a result of broader coverage and an expanded label that includes an asthma indication. Specifically, the drug raked in $206 million in the second quarter, putting it on track to hit blockbuster status this year. Breo Ellipta could indeed turn out to be Glaxo's next franchise-level drug, despite its early commercial struggles.

Another encouraging development is that Glaxo has also been getting a major boost from its joint HIV venture ViiV Healthcare in recent quarters. The HIV medications Triumeq and Tivicay, for instance, hauled in a combined $894 million for Glaxo in the second quarter. Therefore, Glaxo should have the time necessary to work through the changing of the guard in its respiratory franchise, so to speak, without any major drop-off in its top line going forward.

For dividend investors looking for the safer play, Glaxo seems like your best bet. Although the drugmaker could face some serious problems once generic versions of Advair hit the market in the U.S., Glaxo's more organic approach to growth has undoubtedly helped to diversify its revenue base and set it up for sustained growth.

AbbVie, by contrast, has more question marks than answers as it heads into the patent expiration for Humira later this year. Chief among them, the issue of whether or not Imbruvica can successfully fend off the suite of rival BTK inhibitors being developed right now is a total unknown.

At least with Glaxo, there are some encouraging signs that Breo Ellipta can offset a fair amount of Advair's declining sales, and the company hasn't painted itself into a corner financially to move beyond the patent cliff.