Once again, Congress is edging toward another biopharma executive shaming festival. The company in its crosshairs this time, though, is a bit unexpected. Mylan (NASDAQ:MYL) is a generic drugmaker domiciled in The Netherlands, and its CEO, Heather Bresch, is the daughter of Senator Joe Manchin of West Virginia.

If similar congressional hearings are any indication, then at least one member of Congress will take every opportunity to lambast the drug industry's habit of raising prices. The panel will then ask Bresch why Mylan drastically increased the price of its successful EpiPen brand over the past several years.

Healthcare analysts would love to hear an honest "because we can," but don't count on it. I also doubt we'll hear any legislator ask Mylan the question investors want answered: "What would happen if a viable competitor pressured EpiPen's pricing power in the near term?"

Let's see if we can answer that question ourselves.

Over the past few years, Mylan's financial results have been somewhat mixed. In the first half, total revenue grew 12% year over year to $4.75 billion. Operating profit also increased 18.5%, to $516.5 million, but shareholders aren't seeing the benefits, due to an increase in outstanding shares. 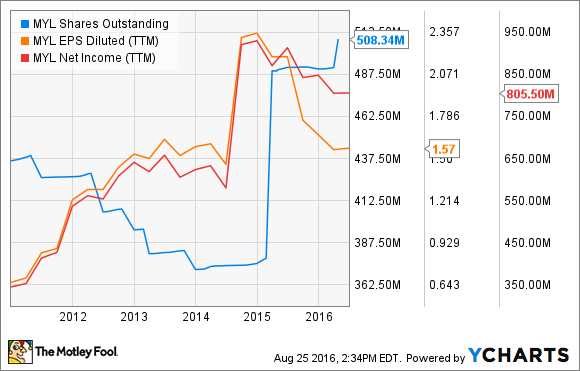 Mylan's long-term debt more than doubled this year to about $12.77 billion, and now interest and other non-operating expenses are dragging down the company's bottom line. The 110 million shares used to acquire Abbott's branded generics business, as well as the more recently issued shares used to buy Swedish pharmaceutical company Meda, have lowered trailing 12-month earnings per share to levels Mylan investors haven't seen for years.

Specialty segment sales are relatively minor for a company on pace to pass $9.5 billion in total revenue this year, but EpiPen probably contributes more to Mylan's bottom line than the company would care to admit. Mylan doesn't break out individual components, but last year, the specialty segment contributed about $1.2 billion in sales, and Mylan disclosed that EpiPen sales contributed at least $1 billion to the segment in 2014 and 2015.

You might be surprised to learn that Mylan doesn't actually make the EpiPen, but rather sources it from Pfizer. Maybe management will blame pharma's Grand Acquisitor for the rapid price increases. Whatever reason they give, there's no denying that Mylan's specialty drug sales are accelerating on the back of EpiPen. Specialty segment revenue during the three months ended June reached $416.2 million, a 34% increase over the previous year period and a 61.4% increase over the previous quarter.

Epinephrine injection devices are too simple and profitable not to draw a big competitor that might upset EpiPen's brand power. Sanofi was forced to withdraw its own offering, Auvi-Q, from the market last year after potentially incorrect dosing. Meanwhile, the FDA denied an application for a similar device from Teva Pharmaceutical Industries earlier this year. However, I'd be surprised if Teva didn't bounce back with a device that passes FDA scrutiny in the quarters ahead.

In the meantime, I've managed to find generic 0.3 mg epinephrine auto-injectors with a list price of $429 per pair, but I had to phone three large retail pharmacy chains with stores near me before I found one that had any in stock. (If you're curious, it was a CVS Health retail outlet that carried the slightly cheaper generic devices, and Walgreens offered to order a set for me.) With somewhat less expensive alternatives available, there's little chance any federal antitrust suit would have legs. 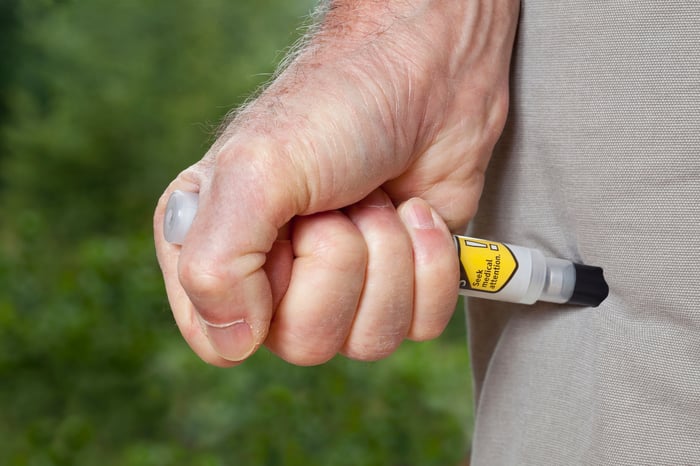 First-half specialty segment revenue increased $144.9 million over the same period last year, largely on the back of EpiPen sales. Just how much of that increase filtered to the adjusted bottom line is anybody's guess, but I'd wager nearly all of it did.

Does Mylan needs to charge $614.07 for a pair of EpiPens? If you're Heather Bresch, or Mylan's higher-salaried executive chairman Robert Coury, then the answer is a definite "yes." Without EpiPen price hikes, the company isn't growing very fast despite its large, recent acquisitions. Until a competitor with the means to challenge Mylan's EpiPen brand enters the arena, expect further shameless increases.