When Tim Cook took over the reins at Apple (NASDAQ:AAPL) from the iconic Steve Jobs on Aug. 24, 2011, he had some big shoes to fill. Apple's stock was flying high on the unrivaled success of the tech giant's iPhone lineup, and with each successive smartphone iteration Apple's revenue and profits continued to climb.

Those days are long gone due to smartphone market saturation, at least for high-end devices, which Apple has steadfastly refused to move away from. Yes, Apple did introduce its smaller and slightly less expensive iPhone SE earlier this year, but even that sets consumers back around $400 to $500, which still leaves it out of reach for most in the world's emerging markets.

That said, Apple shareholders have enjoyed a nice run during Cook's five-year tenure -- except when compared to the tech company's primary competitor Alphabet (NASDAQ:GOOG) (NASDAQ:GOOGL) and longtime rival Microsoft (NASDAQ:MSFT).

Despite the inevitable slowdown of the high-end smartphone market, Apple continues to generate ridiculously high revenue and profits. Last quarter's $42.4 billion in sales and net income of $7.8 billion -- equal to $1.42 earnings per share (EPS) -- would be the envy of any of its competitors. On the revenue front, Apple's generated more than twice Alphabet's and Microsoft's $21.5 billion and $20.6 billion in sales, respectively.

Problem is, Apple fans aren't used to year-over-year declines in sales and profits, though that's what they were dealt last quarter. Revenue dropped 15% in the third quarter from $49.6 billion a year ago, and EPS nosedived 23% from 2015's $1.85 per-share earnings. Cook added insult to injury by sharing guidance of "just" $45.5 billion to $47.5 billion for the current quarter, well below Q4 2015's $51.5 billion.

For Apple, so-so isn't good enough, which is why its stock price is essentially flat for the year. Under Cook's leadership, the stock has climbed 121% after adjusting for stock splits and dividends. Slightly more than doubling Apple's share price since Cook took the helm is hardly a bad thing -- except when compared to Alphabet and Microsoft. 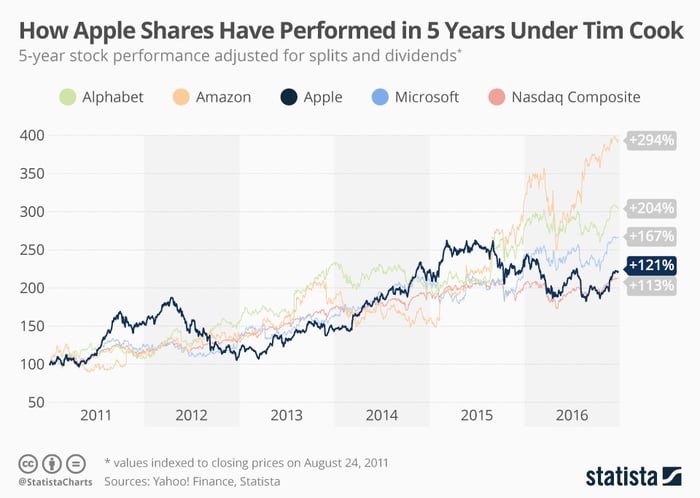 Alphabet's strategy of giving its Android OS away to drive its search advertising revenue has worked like a charm. While Apple was struggling through its drop in sales last quarter, Alphabet shareholders were enjoying a 21% jump in sales to $21.5 billion.

The majority of Alphabet's sales are ad-driven, but even its "other revenue" segment, which includes its multiple moonshots, smart-home initiatives, self-driving cars, and similar cutting-edge forays, climbed 33%, to $2.2 billion. In other words unlike Apple, Alphabet is aggressively exploring its next big thing, while Cook's search for a non-iPhone-related revenue source continues. Which is one reason why Alphabet's stock has more than tripled since Cook became Apple's CEO.

After adjusting for one-time expenses due to deferred Windows 10 sales, Microsoft also grew revenue last quarter, albeit minimally. In the spirit of Alphabet's exploration of new revenue sources, Microsoft is in the midst of successfully transitioning to becoming a dominant player in the fast-growing cloud marketplace. With over $12.1 billion in cloud sales the past 12 months, Microsoft is well on its way to putting its reliance on PCs  in the rearview mirror -- much like Apple needs to do with its crumbling high-end smartphone market.

Microsoft's transformation helps explain why its stock is up 167% in the past five years, easily outdistancing Apple's performance under Cook. A negative comparison to Microsoft is the last thing many iFans wants to hear, but Microsoft CEO Satya Nadella recognized a couple of years ago it was time to reinvent his company's business, and shareholders are reaping the benefits.

Unfortunately for Apple, the worst news is that there are no magic bullets on the horizon. Unlike Alphabet's nanotechnology, self-driving cars, and "smart" Nest device, or Microsoft's cloud, artificial intelligence, and augmented reality solution HoloLens, Apple has no next big thing on the horizon.

Until Cook and team find another iPhone-like revenue driver, Apple will continue to underperform Alphabet and Microsoft -- as painful as that is to hear for iFans.