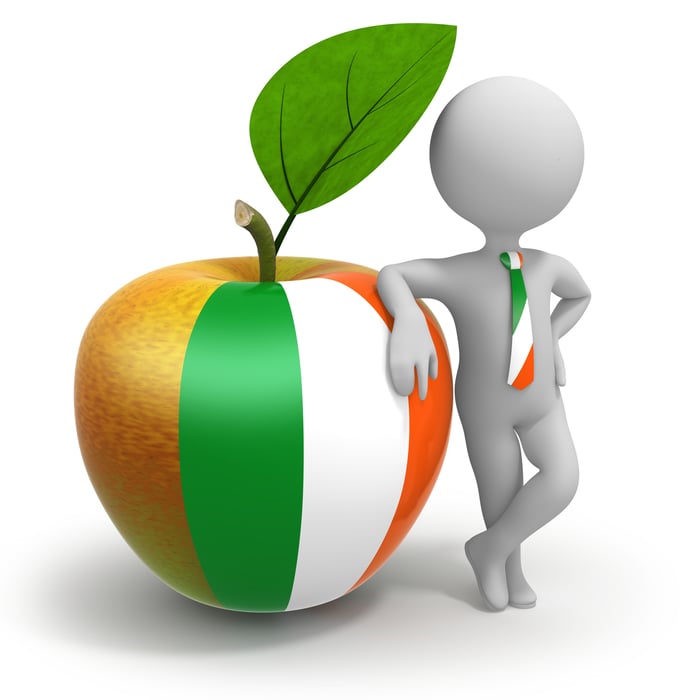 By now, you probably know all about the $14.6 billion Apple (NASDAQ:AAPL) owes the Irish government in back taxes. Cupertino is sure to appeal that decision by European Union regulators, but the age of Ireland-based tax shelters may be coming to an accelerated halt.

Do you know how elaborate Apple's international tax structure actually is? Let's have a closer look.

The company was an early adopter of the "double Irish with a Dutch sandwich" strategy back in the 1980s -- some even say the company invented this tax evasion tool.

The double Irish depended on a quirk in Irish tax laws, where a company could be incorporated in Ireland but avoid corporate income taxes by having its "central management and control" in another state.

So, you could set up one shell company with this physical center on the Emerald Isle, taking advantage of Ireland's paltry 12.5% tax rate and European domicile. Another company would technically be incorporated in Ireland but have its base of operations in an entirely tax-free jurisdiction, such as the Cayman Islands or Bermuda. Crucially, the second entity was assigned the rights to important intellectual property, such as technology patents or design trademarks.

The first company was set up to collect revenue from the American company's non-U.S. operations. However, most of this top-line revenue would be spent on license fees and royalties for that intellectual property nugget, allowing the 100% Irish unit to report low profits or none at all, while the Caribbean business pocketed the real bottom-line profits in a tax-free haven.

The "Dutch sandwich" part of the grand scheme refers to a third business registered in the Netherlands. This is a shim between the two Irish companies, working around Ireland's substantial taxes on transferring profits out of the country. But those taxes are waived when the target is based elsewhere in the European Union, and the Netherlands does not tax profit transfers overseas, so the Dutch middle-man makes for a smoother and lower-cost transfer to that sun-drenched tax haven.

What's wrong with the double Irish?

Now, the double Irish is properly discussed in the past tense. The Irish tax code got an overhaul in 2013, removing the legal basis for registering businesses in Ireland with tax domiciles elsewhere. This change removes the second half of the double Irish, destroying the whole tax-evasion tactic.

However, the new rules currently only apply to starting a new business. Existing companies are still grandfathered in until 2020. So, Apple's big European tax bill has nothing to do with Cupertino overstepping its legal limits. Instead, the Commission found that Ireland was wrong to allow Apple's tax structure to exist in the first place.

Apple will obviously fight this outcome tooth and nail. In a strange twist, the company has an ally in the Irish government. Ireland has also vowed to overturn the European Commission's verdict, which leaves the country fighting to keep Apple from paying it money.

This sounds silly at first glance, but it makes sense when you consider Ireland's place as a favored business center under light taxation. Irish regulators fear the Apple decision may lead to a lemming trail of foreign businesses seeking new tax shelters elsewhere -- long before that looming 2020 deadline kicks in.

You may have heard Apple complaining that it can't take profits home from overseas until the repatriation tax is lowered, but the company has actually been preparing to shift some overseas cash back to domestic shores by pre-paying some of the expected tax bills.

Five years ago, longtime Apple analyst Katy Huberty revealed that the company indeed pays some domestic taxes on foreign earnings. At the time, she used this fact as ammunition in favor of an Apple dividend.

The dividend policy followed a few months later, and Apple is still following its old policy of paying down some foreign repatriation fees in advance. Here's the evidence:

The Irish strategy keeps overseas taxes very low. However, Apple routinely pays nearly double the 35% federal tax rate on domestic pre-tax earnings. This is a symptom of Uncle Sam collecting taxes above and beyond his federal and state levies to cover some of those troubling repatriation fees in advance.

When I checked in on this phenomenon in 2011, Apple's total tax rate stopped at 24%. The foreign tax bill amounted to just 1% of overseas profits, while the domestic tax rate ballooned to 79%. The 2013 reform seems to have steered Apple in a new direction, but the double Irish is still working wonders. Keep in mind that only 34% of Apple's pre-tax profits come from domestic sales, and the balance keeps tipping further and further overseas. In 2013, the domestic portion of EBIT profits was 39%.

Apple spearheaded the charge into Irish-Caribbean tax strategies 30 years ago. Now, pretty much every multinational business worth its salt has followed suit -- and now Apple must lead the way to a new international tax strategy.

The double Irish has kept billions of dollars away from tax collectors around the world, and some of it may get clawed back if the European Commission's verdict isn't overturned. Investors of all stripes should keep an eye on this conflict, because the effects will spread far beyond Apple.