Shares of Under Armour (NYSE:UAA) have fallen 35% over the past 12 months on concerns about its slowing sales growth, declining margins, high valuation, and its ability to keep pace with bigger rivals like Nike (NYSE:NKE). Should investors go against the grain and buy Under Armour as a contrarian investment? Let's examine its growth rate, valuations, and headwinds to see how risky the stock is at current prices.

How fast is Under Armour growing?

Under Armour posted 22% annual sales growth last quarter, which represented a slowdown from 28% growth in the previous quarter and marked its slowest growth in six years. However, the company notes that sales of its new Slingform and Bandit 2 shoes, training apparel, and Curry shoes remain robust. Apparel revenue rose 18% to $1.02 billion during the quarter, and footwear revenue surged 42% to $279 million. Under Armour expects its full-year revenue to rise 24% this year, compared to 28% growth in 2015.

A major weight on Under Armour's top and bottom lines last year was the bankruptcy of retailer Sports Authority. That bankruptcy caused the company's net income to plunge 58% annually to $6 million during the second quarter due to a $23 million operating profit impairment from the retailer's liquidation.

During the third quarter, Under Armour's gross margin fell 130 basis points annually to 47.5% as it used markdowns to sell products which would have usually been sold at Sports Authority. However, its net income rose 28% to $128.2 million as it moved past the impairment charges.

The big problem with Under Armour is that it still trades at high multiples after its year-long decline. Its trailing P/E of 60 is much higher than Nike's P/E of 24, Adidas' P/E of 30, and the industry average of 26 for footwear makers.

Over the past two quarters, the company admitted that its gross margin would be "down slightly compared to last year" due to lower revenue growth. It also expects its operating margin to decline as it boosts its SG&A (sales, general, and administrative) spend by the double digits to match Nike's and Adidas' marketing might.

That strategy strongly indicates that Under Armour is likely worried that Nike's best-selling LeBron James and Kevin Durant shoes could take a big bite out of its Steph Curry shoes in the high-end market. To make matters worse, the Curry 2 was roasted on social media last June, with users comparing the plain white shoes to footwear for nurses.

The company's recent decisions, like its move into the old FAO Schwarz building on Fifth Avenue in New York, indicate that it's eager to match Nike's brick-and-mortar presence and move beyond the Sports Authority disaster. It also signed a distribution deal with Kohl's, which already carries Nike merchandise, and expanded into the wearables market with fitness trackers, connected scales, and sleep monitoring devices. But engaging in a prolonged marketing battle against Nike could be very tough on Under Armour's margins, since Nike has much deeper pockets and economies of scale on its side.

Under Armour's cash and equivalents rose 13% to $180 million last quarter, but its total debt rose 19% to $1.07 billion. The company's free cash flow has also declined rapidly over the past five years. 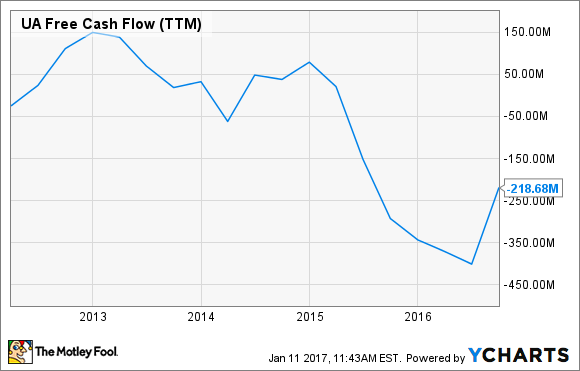 This nasty combination of slowing sales, high valuations, declining margins, negative cash flows, and tough competition have made Under Armour a popular target for short sellers. As of the end of December, 26% of the company's float was being shorted. By comparison, just 6.7% of Nike's shares were being sold short.

Not enough tailwinds to lift this stock

Consumers are clearly still buying Under Armour footwear and apparel, but the valuations don't support its stock price anymore. Unless Under Armour can accelerate its sales growth, while boosting its margins and cash flow again, I believe that the stock remains far too risky as a long-term investment.