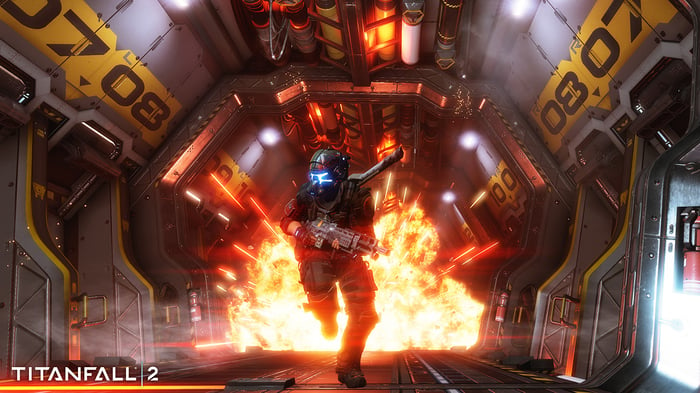 Release timing can have a big impact on a video games' sales, and Titanfall 2 from Electronic Arts (NASDAQ:EA) looks like it could be heading for trouble because of tough competition. The game will launch Oct. 28, one week after EA's own Battlefield 1 and one week before Activision Blizzard's (NASDAQ:ATVI) Call of Duty: Infinite Warfare -- the two biggest 2016 releases in the shooter genre.

Is Titanfall 2 in danger of getting lost in the shuffle of more high-profile releases? If so, what would disappointing sales for the game mean for Electronic Arts?

Background on Titanfall and expectations for the sequel

The original Titanfall was released exclusively for Xbox consoles and PC, and EA and Microsoft touted it as a potentially ground-breaking title. Respawn, a studio that former leads on Activision's Call of Duty series founded, was responsible for developing the game, with Microsoft handling advertising duties in exchange for keeping the game exclusive to the company's gaming platforms. While the game rolled out to solid reviews, Titanfall didn't make the lasting impact on the first-person-shooter genre or the console race between the Xbox One and Sony's PlayStation 4 that many had anticipated.

In June, EA announced that the game had sold 7 million copies, a seemingly impressive figure. However, the game had been largely discounted and bundled with hardware following its March 2014 release, and the 7 million sales figure might also include downloads through the EA Access service. With EA and Microsoft opting not to make any exclusivity deals for the sequel, Titanfall 2 will launch for Xbox One, PlayStation 4, and PC. EA is targeting between 9 million and 10 million copies sold for the game and anticipates that sales growth will be spurred by greater installed bases for current-generation consoles and launching the series on Sony's latest platform.

Quality will be key to standing out

If Titanfall 2 proves to be a high-quality product and delivers welcomed improvements over its predecessor, the significance of a crowded release window should be lessened and the title could steal some thunder from Activision's Call of Duty: Infinite Warfare. On the other hand, Titanfall 2's ability to thrive amid bigger releases will be seriously diminished if the game fails to deliver a top-notch experience. This type of scenario has already played out in the first-person-shooter genre this year, with Activision Blizzard's Overwatch heavily overshadowing Battleborn from Take-Two Interactive. Overwatch and Battleborn shared aesthetic and mechanical similarities; however, the former received a bigger marketing and press push and was ultimately regarded as a much better product, contributing to poor sales for Take-Two's genre release.

Unfortunately for EA, early feedback on Titanfall 2 from a demo trial suggests that the sequel's gameplay might not be resonating with players. One common complaint is that the game has been made to play more like an entry from the Call of Duty series.

With Battlefield 1 taking place in a World War I setting, Titanfall 2's futuristic theme places it closer in line with Call of Duty: Infinite Warfare. According to EA, the logic behind releasing Battlefield 1 and Titanfall 2 in such quick succession is to cover a broader segment of the shooter market during the year's key sales period and to strengthen the company's standing in the category in years to come. Activision's Infinite Warfare has received a mixed response from fans in the lead-up to its release, and EA is counting on winning sales away from Call of Duty by delivering two high-profile releases in the genre during the year's biggest sales window.

What would a disappointing Titanfall 2 mean for EA?

Based on pre-release buzz and the caliber of its competition, Titanfall 2 is in real danger of getting lost among bigger releases in the Battlefield and Call of Duty series and struggling to meet its sales target. Releases in Activision's and EA's biggest FPS series routinely receive marketing budgets between $50 million and $100 million, and Titanfall 2 doesn't appear to have a comparable push behind it. The importance of multiplayer in the genre also means that established series enjoy a network effect, and the original Titanfall released over two years ago and hasn't maintained an active player base.

With big franchises including Battlefield, FIFA, Madden, and Star Wars under its wing, Titanfall isn't one of EA's most important properties, so disappointing sales for the upcoming series release probably won't have a major effect on the company's long-term trajectory. However, should Titanfall 2 fail to improve on the sales of its predecessor, there's a good chance that EA will choose to shutter the series or experiment with taking it free-to-play.

Depending on the extent of possible under performance, Titanfall 2 could potentially negatively impact earnings in the company's most important quarter. However, weak games sales would probably be more indicative of the type of missed opportunity that's common in the games industry rather than a sign of more holistic issues at EA.

Is Electronic Arts Sending One of Its Biggest 2016 Games Out to Die? @themotleyfool #stocks $EA $ATVI $MSFT $TTWO Next Article
Current