Well, that was quick.

Gilead Sciences' (NASDAQ:GILD) meteoric growth came screeching to a halt earlier this year as its hepatitis C drugs, which took the world by storm and generated over $19 billion annually in 2015, saw sales begin to fall. Blame it on a number of factors -- competition, price discounts to expand the patient pool, a changing mix of payers -- but the fact of the matter is that Gilead's top line is falling for the first time in years.

Fortunately, the embattled big-cap biotech has two big opportunities to reignite growth -- to the tune of $10 billion in revenue or more. 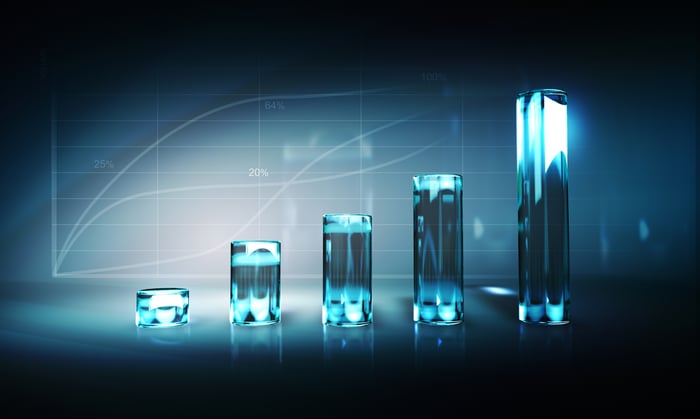 NASH, or nonalcoholic steatohepatitis, is inflammation and damage of the liver caused by the growth of fatty tissue over time. Between 2% and 5% of Americans have NASH, which can lead to liver fibrosis and, ultimately, cirrhosis.

Gilead is developing three different drugs to combat NASH: monoclonal antibody simtuzumab, ASK1 inhibitor GS-4997, and FXR agonist GS-9674. Gilead is testing each drug separately, seeking a roughly 20% decrease in liver fat in a series of phase 2 studies (data expected later this year). Then Gilead plans to put the drugs in combination trials, with the goal of finding a cocktail that is maximally effective. Analysts see an effective NASH drug potentially pulling in $10 billion in annual peak sales (in a market that could be valued as highly as $40 billion annually in total).

Gilead isn't the only company playing for keeps in this space, however. Shire's SHP626 recently snagged an FDA fast-track designation as it entered phase 2 trials. And Intercept Pharmaceuticals' Ocaliva is in phase 3 trials for NASH, having been recently approved for primary biliary cholangitis. Fortunately, the NASH market appears likely to support multiple drugs, given its potential size -- but there will undoubtedly be pricing wars if more than one company snags FDA approval.

OK, I'll admit that I'm cheating a bit with this one: Cancer is a pretty broad set of diseases, and Gilead has assets attacking several different treatment angles. Momelotinib, a JAK inhibitor, targets myelofibrosis and should report data from its phase 3 clinical trial later this year. Gilead also has another cancer drug in phase 3 trials: GS-5745 for gastric cancer. The disappointing launch of Zydelig -- which is only approved for a few relapsed cancers after major safety issues derailed additional trials -- was a definite bloody nose for Gilead, but the company has a number of opportunities in earlier-stage drugs that may pay off in spades over the long term.

Among those, perhaps the most exciting is BTK inhibitor GS-4059, which has recently entered phase 1 and is being developed in collaboration with Ono Pharmaceutical. A fellow BTK inhibitor, Imbruvica, is out on the market for a series of blood cancers and has been a big success for partners Pharmacyclics and Johnson & Johnson. In fact, Imbruvica was one of the primary reasons AbbVie shelled out $21 billion for Pharmacyclics earlier this year -- and while the precise details of Gilead's deal with Ono aren't public, it's fair to guess that Gilead picked up GS-4059 for a great deal less than that.

Gilead has plenty of irons in the fire in terms of internal research and development, but the other option -- and, in my mind, the likelier one -- is that Gilead could acquire an outside company. CEO Dr. John Milligan made Gilead's interest in cancer-related mergers and acquisitions clear in the company's most recent quarterly call: "We are committed to oncology, and we continue to be interested in assets, collaborations and partnerships where we could enhance our ability to continue to sell these products." Read that as confirmation that Gilead's actively looking at deals.

And while we don't have peak sales estimates for Gilead's various cancer drugs, if management can build a strong franchise with several blockbusters, they should easily clear $10 billion annually.

I've called out what I think are Gilead's biggest opportunities -- but they're far from Gilead's only opportunities. For example: Filgotinib, a drug targeting autoimmune diseases that Gilead picked up in a sweetheart deal last year, has just entered phase 3 trials and could generate peak annual sales of $2 billion or more.

And with $8.8 billion in cash and short-term investments, Gilead has plenty of firepower to surprise us all and push into a new disease area as well. Management have announced their intention to slow share repurchases in the second half of the year to "focus our capital allocation on advancing our R&D opportunities," so I'm sure we'll have lots more to say about all this in the near future. As for me, I'm going to enjoy the ridiculously cheap valuation while I wait for new revenue opportunities to appear.