Memory-chip manufacturer Micron Technology (NASDAQ:MU) can be a polarizing company. The stock crashed in 2015, losing 60% of its value as fears of oversupply in the DRAM market turned into reality. The record profits of fiscal 2014 couldn't be sustained, despite some analysts believing that the DRAM market had fundamentally improved because of diminished competition. Micron has now posted a net loss in each of the past two quarters, but the expectation of a recovery has propelled the stock nearly 20% higher year to date. 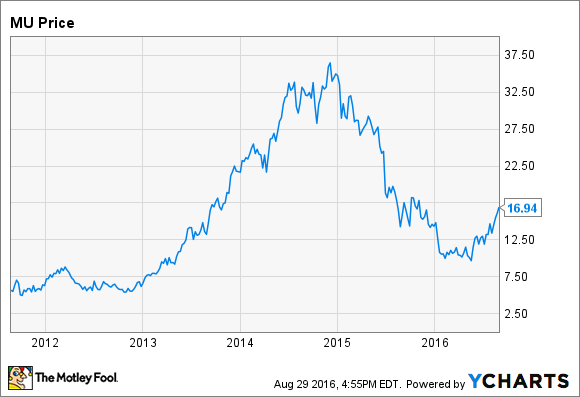 While Micron is considered a technology company, that label can lead investors to forget that Micron is ultimately a manufacturer of commodity products. Here are three charts that drive this point home.

If you took a snapshot of Micron in 2014, you would have seen a wildly profitable semiconductor company earning exceptional returns. Micron earned $3.1 billion of net income on $16.4 billion of revenue in that year, with a gross margin of 33.2% and an operating margin of 18.9%. By any measure, it was a great year for the company, and the market responded by pushing up the stock. From the start of 2013 through the end of 2014, the stock soared a mesmerizing 450%.

The trouble with this picture becomes apparent when you look at Micron's history. Here's how Micron's operating margin evolved from 1994 through 2014: 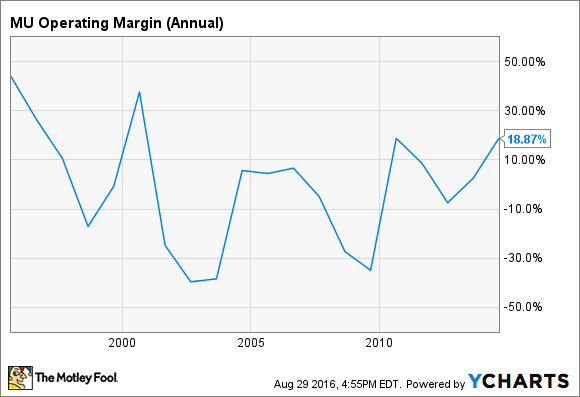 Booms and busts, good years and bad years. In fiscal 2015, operating margin remained elevated at 18.5%. But in the past twelve months, that margin has slumped to just 4.9%, and it's at risk of turning negative if the memory markets don't improve. In other words, exactly like what happened in the past on multiple occasions.

Micron manufactures two main types of memory, DRAM and NAND. Both are commodities, and prices for both are largely determined by supply and demand. That fact alone makes the memory industry tough, but there's an added complication: Micron and its competitors must constantly invest in new technology and equipment in an effort to drive down per-bit costs. That makes the memory industry extremely capital intensive.

Here's what Micron has been up against over the past five years: 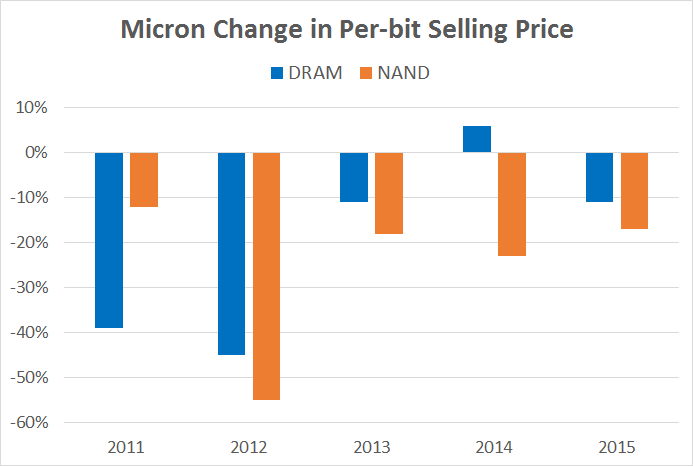 DRAM and NAND per-bit prices have tumbled in nearly every year, and the first half of 2016 hasn't been any better. Through the first six months of this year, per-bit DRAM selling prices have declined by 33% year over year, while NAND selling prices have fallen by 14%. If Micron can't cut per-bit costs quickly enough, profitability suffers.

Per-bit prices should generally decrease over time, as devices pack in more memory and manufacturers increase density, but the pace of those declines varies wildly. It's that variation that can cause major problems for Micron. 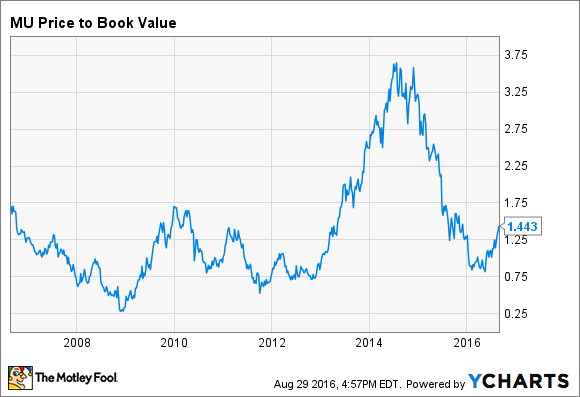 The rally in 2013 and 2014 corresponded with a major expansion in Micron's price-to-book ratio, bringing it to the highest level since the dot-com bubble. That should have been a red flag for investors. Typical levels are much closer to one -- about what investors would expect from a company that sells commodities and has no significant competitive advantages. Today, Micron trades at what looks like a reasonable multiple of its book value compared to historical values.

It's easy to slap a multiple on recent earnings. But a company like Micron, which sees its profitability fluctuate wildly, shouldn't be valued in that way.