It's been more than a year since eBay (NASDAQ:EBAY) spun off PayPal (NASDAQ:PYPL). In that time, shares of eBay have gone up about 12.5% while PayPal shares have suffered a loss of about 2.9%. If you combined the market caps of both companies, they're trading for the same value as the combined company traded for before the spinoff. So much for unlocking value. 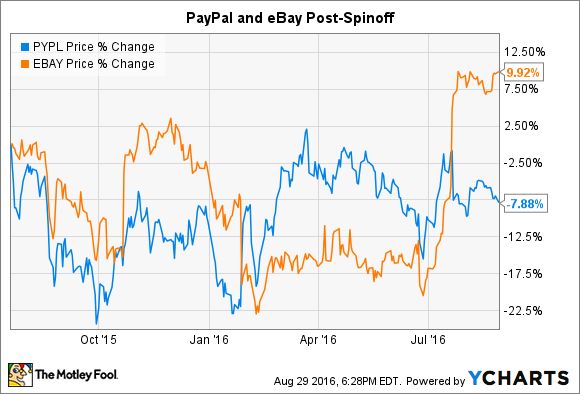 Still, both companies offer interesting plays on the booming e-commerce segment. PayPal is the leader in online payment processing, boasting 188 million active users as of the end of the second quarter. eBay is a leading e-commerce marketplace with 164 million active buyers. But which should investors choose?

All about cash flow

PayPal brought with it the same mentality about driving business growth as eBay: Focus on free-cash-flow generation and the rest will follow. Cash can be invested back into the business, spent on acquisitions, or returned to shareholders through share buybacks. Both eBay and PayPal are focused on all of those, but PayPal is somewhat more capital intensive than eBay.

PayPal is growing its revenue and cash flow faster than eBay, though. Through the first half of 2016, PayPal's revenue is up 17.1% year over year, while eBay's is up just 4.7%. Free cash flow at PayPal is up 48.4%, but it was impacted by the spinoff last year. eBay's is likewise up 46.7%. Investors should expect more disparity in those numbers moving forward now that the big one-time expense is out of the way.

What does each company do with all that cash?

What PayPal and eBay do with their cash is very different. eBay has chosen to buy back shares of the company to return that capital to shareholders. Last quarter, eBay bought $500 million worth of common stock, and the board approved another $2.5 billion in stock repurchase authorization.

eBay's growing cash position represents an opportunity for the company to return more cash to shareholders or invest more aggressively in its faster-growing businesses, like StubHub or eBay Classifieds. The recent $2.5 billion buyback approval is a sign that it's going to continue to retire shares, but it's managed to make some deals with the Philadelphia 76ers and Boston College Athletics to make StubHub the official market for their tickets.

As both companies are focused generating free cash flow, it makes sense to compare them on a price-to-free-cash-flow basis.

PayPal currently trades for 20.6 times its trailing-12-month free cash flow. eBay changes hands for just 13.9 times free cash flow. That much higher multiple for PayPal implies significantly higher cash flow growth over the next few years, which lines up with the analysis so far.

Considering eBay is able to generate higher free cash flow from its revenue, it should trade for a similar price-to-sales ratio as PayPal even though PayPal is growing faster. Shares of eBay currently trade for about 4 times sales while PayPal shares are currently valued at 4.5 times sales. That's close enough, too.

Both stocks look fairly valued against one another, so it really comes down to how you, as an investor, put your portfolio together. If you're looking for a faster-growing company that's reinvesting cash flow into the business, PayPal presents a better buy. If you're looking for a cash-flow machine that will return that cash to shareholders, eBay is a better company for you.