The upcoming Model 3 is key to Tesla's mass-market hopes. But Tesla said it may need to raise more money to get the compact electric sedan to market. Image source: Tesla Motors.

Tesla Motors (NASDAQ:TSLA) plans to raise additional funds before the end of the year. The added cash will help fund the development of its upcoming Model 3 sedan and the ongoing build-out of its battery Gigafactory, the company said in a regulatory filing on Wednesday.

In a filing with the Securities and Exchange Commission related to Tesla's proposed merger with Solar City (NASDAQ:SCTY.DL), Tesla discussed the likely future liquidity needs of the combined company. That section included this statement (emphasis added):

While Tesla expects that its current sources of liquidity, including cash and cash equivalents, together with its current projections of cash flow from operating and retail financing activities, will provide it with adequate liquidity based on its current plans through at least the end of the current fiscal year, Tesla is currently planning to raise additional funds by the end of this year, including through potential equity or debt offerings, subject to market conditions and recognizing that Tesla cannot be certain that additional funds would be available to it on favorable terms or at all.

Those additional funds, Tesla said, would be used to support several ongoing initiatives.

Why another round of fundraising isn't a surprise

It's not at all surprising that Tesla plans to raise more money by the end of the year. CEO Elon Musk had previously warned that the company might seek "a small equity capital raise" at some point, though the hint was that it wouldn't be necessary until 2017.

It's also not surprising because this is Tesla, and Tesla's ambitious plans are going to require a lot of cash. Just the automotive portion of Musk's latest "master plan, part deux" will almost certainly cost more than $10 billion to realize. (And remember that with an automaker, the huge product-development and tooling costs are paid up front, before a single product ships.)

At some point, the hope is that Tesla will be able to fund those plans out of its own profits. But that point won't come any time soon: Tesla lost $293 million in the second quarter, and there's not much chance of a dramatic swing to profitability before the Model 3 starts shipping. Tesla is just spending too much money.

What another stock sale will mean for Tesla investors

Every time Tesla sells more stock, analysts worry the dilution will hurt Tesla's share price. So far, those fears have proven unfounded. The market absorbed Tesla's most recent equity offering, on May 19, in stride. 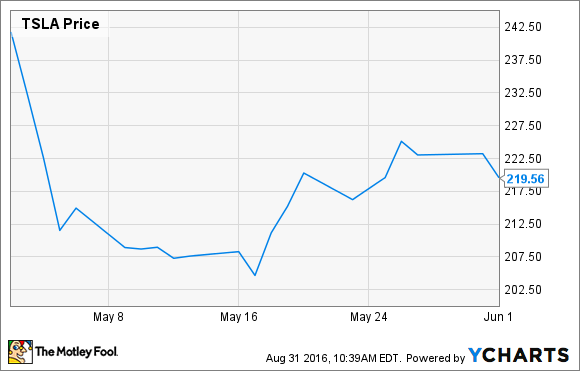 It's likely Tesla is going to need several more not-so-small equity capital raises over the next couple of years. Fortunately for the company, Tesla's stock trades at a sky-high valuation that is more about the company's story and prospects than it is about fundamentals. As long as the story continues to inspire investors (and as long as nothing happens to make it seem wildly improbable), the market will probably be willing to support additional equity offerings.

What's next for Tesla

Assuming that shareholders vote to approve the merger with Solar City, the next big milestone for Tesla's core auto-making business will be the launch of the compact Model 3 sedan. That's currently expected to happen in the second half of 2017.

That launch will tell us a lot about how the subsequent phases of Tesla's plan will -- or won't -- unfold.