It's a new month, but September won't be just any month for a few companies. Apple (NASDAQ:AAPL), Chipotle Mexican Grill (NYSE:CMG), and Fitbit (NYSE:FIT) have a lot riding on events that will play out in the coming weeks.

Each company stands to close out the month in a far different state of worth in the market's eyes. Will the looming catalysts be positive or blow up in investor faces? Let's size up why all three of those stocks could be in for a wild September. 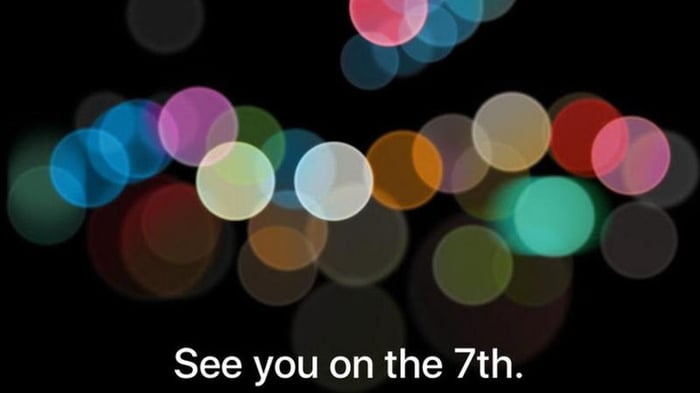 The media invites are out, and there's no mystery as to what the world's most valuable consumer tech company will unveil next week. "See you on the 7th" refers to the event date -- Sept. 7 -- but it's also clearly a nod to the iPhone 7.

The sleuths at MacWorld have tried to read into the invitation beyond the obvious numerical nod. The suggestion is that the bokeh photographic effect of what appears to be the Apple logo confirms the dual lens camera upgrade that's been rumored for at least the iPhone 7 Plus. Dual cameras would help create the bokeh effect. The "see you" and dark background could also suggest an improved camera for better nighttime shots.

For months, the concern has been that Apple will hold back on game-changing updates until next summer when it celebrates the 10th anniversary of the iPhone. Expectations pared back is a good thing for investors. It gives Apple a chance at an upside surprise if we get more than just more storage, a new chip, enhanced camera, and earbuds that plug into the charge port to make the device more resistant to water. There's also a good possibility that we get an updated Apple Watch. That's one product that has yet to go mainstream like the iPhone and iPad.

Chipotle's been in a giving mood these days. We're now two months into the three-month Chiptopia promotion, where frequent diners are rewarded with free entrees after every third or fourth visit. September gets even more interesting. The 2,142-unit chain is offering a complimentary fountain drink or iced tea for anyone flashing a valid high school of college ID and paying for an entree. Chipotle is also offering free kid meals on Sundays when accompanied by an adult entree purchase.

It may seem like a promotional overload, but it's smarter than that. Chiptopia is seemingly succeeding in getting the chain's most ardent fans to come back more often. The free drinks will bring teens and young adults who may have been the most influenced by the negative headlines when the food-borne illness outbreaks happened late last year. The kid-meal freebies will woo young families on a day that's typically slow for the burrito roller.

We won't find out if all of these marketing maneuvers are working until after the quarter is done, but the reason to tune into Chipotle is that it will likely announce a more permanent replacement for Chiptopia as we get closer to the end of the month. The chain will want to hit the ground running in October so it doesn't lose September's triple-headed promotional campaign, and that means winning over consumers -- more than just the millions that bought into Chiptopia -- starting later this month.

Get the band together

Fitbit has made wearable fitness in general and fitness-tracking bands in particular cool, but this is still a company that needs to prove itself with every product rollout. We'll get a taste of that when the Fitbit Charge 2 hits stores in a few days and Fitbit Flex 2 rolls out later this month.

Fitbit lives and dies on new products, and the stock follows suit. When its first foray into the smartwatch market was panned by tech bloggers, Fitbit stock took a hit. Fitbit Blaze turned out OK. It has sold 1 million units in each of the past two quarters.

Fitbit has a broad product line, but roughly half of its sales through the first half of the year have been generated through two new fitness trackers it introduced during the first quarter. The new Charge and Flex bands have that kind of power, and we should know in the coming weeks if one or both are hits with the masses.