The wildly unprofitable cybersecurity company is no longer growing very fast. Investors would be wise to look elsewhere.

Once a Wall Street darling, cybersecurity company FireEye (MNDT) has fallen on hard times. The stock has tumbled over the past year, losing nearly two-thirds of its value. Measured from its peak in early 2014, the stock is down 85%. 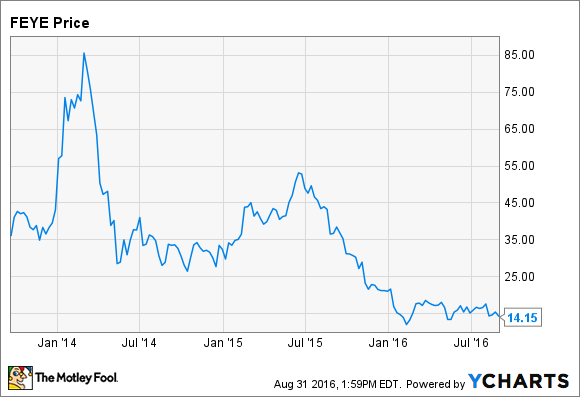 FireEye's strategy has long been "grow fast and worry about profits later," which worked until it didn't. While the company grew at a breakneck pace in its early years, giving investors a reason to put up with astronomical losses, growth is now slowing down dramatically. During the second quarter, revenue grew by just 19% year over year, and bookings grew by an even slower 10%. The company posted a net loss of $139 million on just $175 million of revenue.

With growth no longer impressive enough for investors, FireEye is embarking on a restructuring plan involving layoffs, with the goal of achieving balanced growth and profitability. In other words, the days of rapid growth are over, and now the company needs to figure out how to turn a profit. That will be easier said than done.

Betting on a wildly unprofitable company eventually becoming profitable could pay off big time, but the odds aren't in your favor. Here are two other stocks that compete in the cybersecurity market that look like better options for investors.

"Growing too fast to be profitable" is a lame excuse. Racking up huge losses by throwing money into sales, like FireEye has done, only works if those customers stick around for the long run. That's far from guaranteed. Another small cybersecurity company, CyberArk Software (CYBR 1.90%), has taken a different approach. Not only did the company's revenue increase by 39% year over year during the second quarter, but CyberArk produced a profit. And not just a wishy-washy "adjusted" profit. GAAP operating margin was an impressive 16.6%.

CyberArk focuses on privileged account management solutions, which protect against internal breaches. This is a niche area within the broader cybersecurity market, with many other companies, including FireEye, offering solutions that aim to prevent external breaches. This focus on a specific area limits how big CyberArk can become, but it also allows the company to build up a competitive advantage. The fact that CyberArk is already producing exceptional profitability is a good indication that its strategy is working. The stock is expensive, trading for around 50 times analyst estimates for full-year earnings. But the company is producing results that can justify a premium valuation.

The cyber security market is extremely fragmented, with a large number of small companies providing narrow sets of products and services. According to networking hardware giant Cisco Systems (CSCO 1.46%), the typical large enterprise currently uses in excess of 50 security vendors, a situation that no doubt creates an administrative headache. Cisco's strategy is to build an integrated security business that can replace a significant number of those vendors, simplifying the buying of security products and services for its clients.

Cisco already has a major security business, generating just shy of $2 billion of revenue in fiscal 2016. A flurry of acquisitions over the past few years, including CloudLock, Lancope, Portcullis, and OpenDNS, have helped drive growth and broaden Cisco's portfolio of products. In fiscal 2016, Cisco's security business grew by 13%, making it the fastest-growing segment for the company.