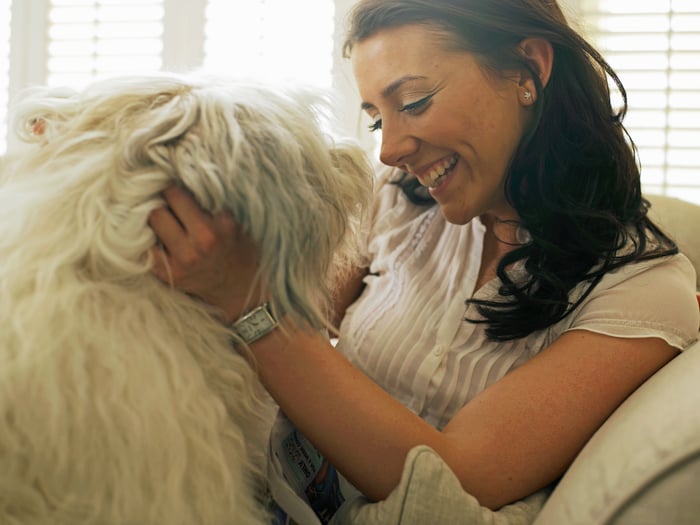 Zoetis Inc. (NYSE:ZTS) is the world's biggest pure-play manufacturer of healthcare products used in animals. The company's livestock and companion animal product lines and its global footprint means that it's positioned to capitalize on growing demand tied to a larger and wealthier population. But is Zoetis a stock that's worth buying?

There are billions of animals worldwide that are being cared for by people, including:

Those numbers translate into billions of dollars in annual spending on animals. According to the American Pet Products Association, a total $60.5 billion was spent on pets alone in 2015.

Zoetis is 45% bigger than the second largest player in animal health -- Merck & Co. -- so it's not surprising that it's generating billions of dollars in sales every year from its 300 plus product lines, nor is it shocking that its sales are increasing. In the second quarter, Zoetis' revenue was $1.21 billion, up 2.8% year-over-year including currency exchange headwinds. Remove those headwinds and sales were up 6% from last year. The second quarter performance brought trailing 12 month sales to $4.86 billion, which is handsomely higher than its sales pace at the time of its IPO back in 2013. 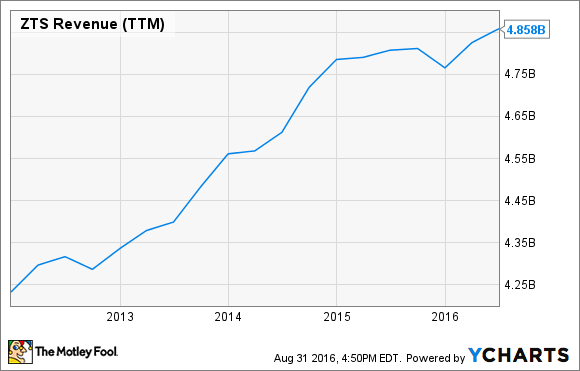 In the U.S., companion animal product sales grew 17% thanks to the launch of new products, including Apoquel, a medicine that reduces itching in dogs caused by allergies. U.S. livestock revenue also grew 2% thanks to expanding herd sizes.

International companion animal sales improved 2% on a reported basis, or 6% operationally, mostly thanks to Apoquel.

Importantly, leveraging sales growth against fixed costs and expense reduction programs is translating into solid EPS growth, too. Second quarter earnings per share was $0.49, up 14% from a year ago.

Zoetis is guiding for over $4.8 billion in sales and $1.86 in adjusted EPS this year and next year, management expects revenue to eclipse $5 billion and adjusted EPS to exceed $2.24.

The global market for animal health is growing at a mid single digit rate and Zoetis' pole-position in the industry should allow it to grow sales similarly. The big reason to own Zoetis, however, isn't steady-eddy sales growth, but the potential to grow earnings far more quickly than sales. If management can continue doing that, then there will be plenty of room to reward investors with dividends and buybacks. Zoetis returned $370 million to investors last year, including $170 million that was paid out in dividends.

Overall, Zoetis sales and earnings growth makes it worth considering for portfolios, but it's admittedly not a cheap stock. With a forward P/E ratio of 22, it seems to me that investors are pricing the stock fairly already. Therefore, investors might want to take a wait-and-see approach to this stock with an eye on adding it to long-haul portfolios if shares retreat.