Oil companies aren't ready to start committing to offshore projects. To the contrary, it sounds like some are actively trying to get out of existing contracts.

When Seadrill Ltd (SDRL) released its financial and operating results on Aug. 25, there was a paragraph in the "market development" commentary that really stood out, particularly the last sentence (emphasis mine):

The majority of customer conversations continue to relate to "blend and extend" arrangements and other renegotiations. In some instances rates are being negotiated lower without extending the contract term with cancellation and retendering by oil companies as the alternative. Robust contract terms are increasingly important and many customers are keeping a watchful eye on performance metrics in an effort to find grounds to terminate.

This is something that investors should take note of, considering that Seadrill's backlog of contracted work must be relied on to carry the company through the downturn. Unfortunately, it's starting to become unclear how secure a safety net the backlog is.

The Pemex deal is especially troubling considering that the contract reduced day rates on five other vessels, and a material agreement had actually been reached in early 2015. To put the question in other words -- just what kind of recoverability will Seadrill have for those concessions? At this point, it's not clear, though Seadrill says it "disputed the grounds for termination and is reviewing its legal options."

Seadrill's revenue in decline based on existing backlog

Over the past couple of years, Seadrill's revenue has fallen sharply: 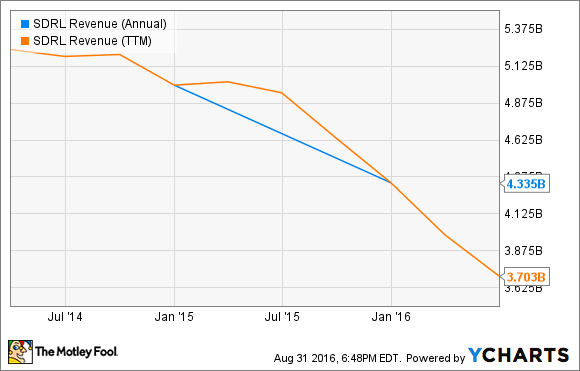 After generating $1.8 billion in the first six months of 2016, Seadrill's backlog, as reported on Aug. 25, would generate approximately $1.4 billion in revenue in the second half of 2016. Added together, Seadrill is on track to generate $3.2 billion in revenue for the full year 2016. That's assuming higher utilization rates than the company's fleet has delivered this year, and assuming no further cancellations.

Seadrill has a lot of vessels coming off contract between now and mid-2017. Here's a breakdown of vessels with pending expirations:

Going even further out, Seadrill has two contracts expiring in October and three in December. All in, Seadrill's current contracted backlog for 2017 would generate approximately $2.27 billion, assuming maximum utilization and no further cancellations.

Keeping its backlog intact must be a priority

The numbers above are in many ways a best-case scenario of what Seadrill would be able to generate from its current backlog, and that's not a good situation to be in at all. Seadrill will be able to reduce its operating costs as vessels go idle, but at some point its fixed costs will exceed revenues, and that point could happen soon. This is particularly true if any of Seadrill's major customers makes a concerted effort to walk away from existing contracts.

And this might not be the biggest elephant in the room.

Seadrill has $2.4 billion in long-term debt due between now and June 2017, with $450 million due by the end of 2016. The company had $1.3 billion in cash and equivalents on its balance sheet at the end of the second quarter, so it should have enough liquidity to deal with this first tranche. But once more contracts expire and the company's cash flows deteriorate even further, all bets are off that the company will have the liquidity to retire the other $2 billion.

Recovery could happen quickly, but when remains uncertain

There's a strong chance that when offshore does recover -- which it will, since offshore oil and gas will be an important fuel source in coming years -- it could recover quickly. This is because the utter lack of capital investment in the oil patch over the past year will eventually lead to global output falling behind demand. The natural decline curves of existing production all but guarantee that will happen.

That would mean investors coming back to the sector. Seadrill would likely have little trouble refinancing its debt, and eventually producers would start contracting for new drilling.

But that sentence from the earnings report really stands out and makes it very clear that today Seadrill has its work cut out for it simply to keep the business it has locked up. As long as offshore oil producers are trying to find ways out of contracts, a recovery isn't anywhere close to starting. And Seadrill will be in dire straights if the offshore market doesn't start to recover in the next 10 months. Invest accordingly.

Jason Hall owns shares of Seadrill. The Motley Fool recommends Seadrill and Statoil. We Fools may not all hold the same opinions, but we all believe that considering a diverse range of insights makes us better investors. The Motley Fool has a disclosure policy.