Please ensure Javascript is enabled for purposes of website accessibility
Log In Help Join The Motley Fool
Free Article Join Over 1 Million Premium Members And Get More In-Depth Stock Guidance and Research
By Travis Hoium – Sep 1, 2016 at 8:06AM

Tesla Motors' (TSLA 2.85%) buyout of SolarCity (SCTY.DL) may be in trouble before it really gets off the ground. Based on recent trading, the stock market is indicating that odds of the buyout going through are dropping by the day. 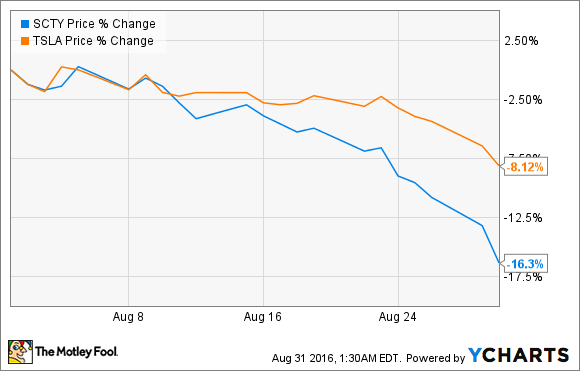 Why investors don't think a buyout will go through

A lot of reporting on the deal has assumed Tesla's buyout of SolarCity is essentially a lock. Elon Musk is the largest shareholder in both companies, and if he wants the buyout to go through, it will -- or so the narrative goes.

That could be a more contested vote than you might think considering SolarCity's recent troubles. CEO Lyndon Rive and Elon Musk recently bought $100 million of a $124 million bond offering at the highest rates SolarCity has ever sold solar bonds for. If SolarCity is turning to its founders for funding, it could be a huge cash drain under Tesla Motors' ownership, something the auto company can't afford.

Then there's the rising costs at SolarCity and the fact that it's being forced to transition from a leasing sales and financing model to a cash or loan sale model. That likely means less reliance on debt to fund the business, but it also means lower margins and customers with an easier ability to compare prices. That's led to lower profitability and potentially less market share, which is less attractive to Tesla.

Synergies of an acquisition come into question

Another factor that could be playing into the divergence of Tesla and SolarCity's stocks could be investors questioning the potential synergies between the two companies. Will EV customers really buy a $20,000+ solar system at the same time they buy a car? Will the vast financing needs of both companies be too much for a combined entity to handle? How will owning a battery manufacturing facility, a solar panel plant, and an auto assembly plant work together?

Elon Musk has a master plan that includes combining EVs, energy storage, and solar, but if investors don't buy into it, neither company can fund the plan. And that could be playing a role in SolarCity's falling stock.

It's still possible SolarCity will be bought by Tesla, but it's far from a done deal. Shareholders will get their say, and right now, I don't think Tesla Motors investors should want the distraction of owning a solar company.

More concerning is that if SolarCity isn't bought by Tesla Motors, it will have a harder time standing on its own. The company has already resorted to funding from its founders to fund the business, and with borrowing costs rising, there could be a downward spiral on the horizon. Maybe SolarCity shareholders should be concerned that the market is starting to question its acquisition?