STMicro and Texas Instruments are both safer chipmaking plays than the motion sensor maker.

InvenSense (INVN), a maker of motion sensors for smartphones, tablets, smartwatches, and other devices, lost about 25% of its market value over the past 12 months due to slowing sales of mobile devices worldwide. 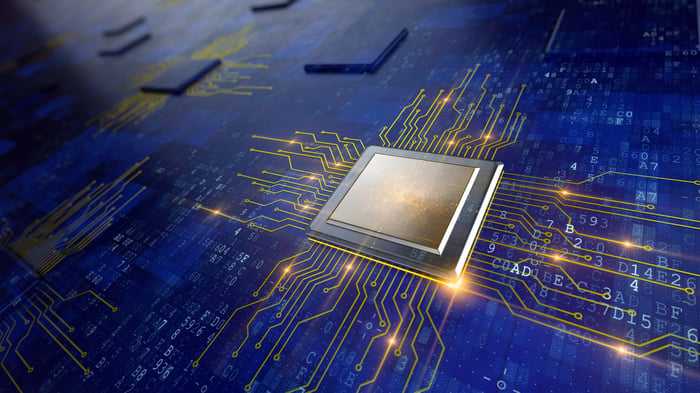 That pressure caused InvenSense's revenue to fall 43% annually last quarter, compared to a 20% decline in the previous quarter and 59% growth in the year ago quarter. The company's heavy dependence on Apple and Samsung, which respectively generated 40% and 16% of its sales last year, also makes it a riskier play than more diversified suppliers. The company's cash position also plunged 44% sequentially to $23 million last quarter.

That's why I previously declared that InvenSense was far too risky for most investors. If you're looking for better supply chain plays in the mobile market, STMicroelectronics (STM -0.33%) and Texas Instruments (TXN -1.64%) might be much safer long-term plays.

STMicro makes a wide variety of semiconductors for connected cars, smart appliances, and various Internet of Things gadgets. In a devastating blow to InvenSense last year, Apple installed STMicro's motion sensors instead of InvenSense's into the Apple Watch.

STMicro has two key advantages against InvenSense -- it's bigger, enabling it to leverage economies of scale against smaller suppliers, and it's better diversified. Last quarter, 42% of its revenues came from its automotive business, 33% came from microcontrollers and digital integrated circuits, and 22% came from the MEMS (micro-electrical mechanical systems) business which competes against InvenSense. Revenue rose year-over-year at its automotive segment, fueled by content share gains in connected cars, but fell at its other two businesses, due to softer demand for networking applications and mobile devices.

But overall, STMicro's revenues fell just 3% last quarter, compared to a 5% decline in both the previous and prior year quarters. Analysts expect STMicro's revenue to stay flat this year, then rise 4% next year on stronger demand for automotive chips and higher demand from connected and mobile devices. By comparison, InvenSense's revenue is expected to fall 24% this year before possibly rebounding 14% next year.

STMicro's net income fell 34% last quarter, but it's expected to finish the year with 5% earnings growth and post an average of 49% annual earnings growth over the next five years.

That gives it a very low 5-year PEG ratio of 0.8, which is lower than the "undervalued" threshold of 1. InvenSense's earnings are expected to fall 78% this year but possibly rebound to an average of 20% growth over the next five years, giving it a much pricier PEG ratio of 3.4. STMicro also pays a forward annual dividend yield of 3.1%, while InvenSense has never paid a dividend.

Like STMicro, Texas Instruments (TI) is a better diversified supply chain play than InvenSense. The company generates most of its revenue by selling analog and embedded chips for the industrial, automotive, personal electronics, communication equipment, and enterprise systems markets. Apple is one of Texas Instruments' top customers, but its orders only accounted for 11% of its top line last year. TI's revenue rose 1.2% annually to $3.27 billion last quarter. Analysts expect the company's sales growth to stay almost flat this year but rise 4% next year.

TI stands out from the competition for two reasons -- its massive margins and its shareholder friendly practices. By using a lower-cost 300-millimeter analog manufacturing process, TI's gross margin hit 61.2% last quarter, up from 58.2% a year ago. By comparison, STMicro and InvenSense respectively had gross margins of 33.9% and 41% in their most recent quarters.

Those beefy margins, along with buybacks, boosted its net earnings by 17% annually last quarter. Over the past 12 years, TI has reduced its share count by 42%, and raised its dividend every year during that period. It currently pays a forward yield of 2.2%, and has pledged to return 100% of its free cash flow to investors through buybacks and dividends.

Analysts expect TI's earnings to rise 9% this year and grow at an average rate of 10% over the next five years. That gives it a PEG ratio of 2.3, which is higher than STMicro's PEG ratio but still lower than InvenSense's.

It's generally safer to invest in bigger and more diversified chipmakers like STMicro and Texas Instruments than smaller players like InvenSense, which are too exposed to single customers and lack the scale to remain competitive. STMicro and TI probably won't produce huge returns over the next year, but they also won't be hit as hard by news of weak sales of iPhones or other mobile devices.