Nike's fiscal year 2016 ended on a down beat, and Q1 could get worse. Long term, though, this should be a small hurdle in Nike's continued growth story. 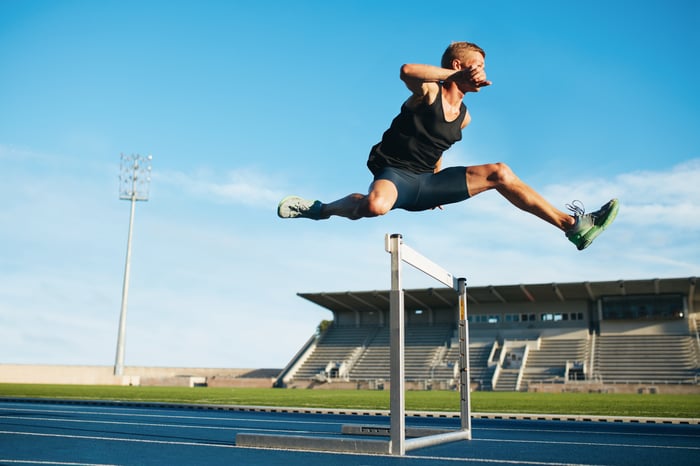 Nike (NKE -1.20%) has reported mixed earnings lately. For the fiscal year 2016 ended May 31, Nike's income grew an impressive 15% year over year, but in the fourth quarter it was down 2%. According to management, things look good for Nike in 2017 and long term, but for the coming Q1, things are going to stay a little bumpy. Should investors worry, or trust management that this will only be a short term hurdle?

For the fiscal fourth quarter, Nike reported 6% growth in revenue year over year, but profit growth still fell. The reason for the contradiction -- with earnings growth full year but a drop in Q4 -- is that gross margin in the fourth quarter fell to 45.9%, which seems to be mostly due to inventory challenges, something management said during the recent earnings call that it was working to fix.

Another reason for the drop in the fourth quarter seemed to be tax rate, which can be affected by the percentage of sales from foreign markets and other fluctuations. The fourth quarter tax rate was 2.12%, compared with just 17.8% in Q4 2015 and 18.7% for the full year 2016.

The coming quarterly results for the fiscal first quarter ended August 31 are expected to remain bumpy. Nike management warned that Q1 gross margin is likely to decline by as much as 100 basis points year over year as excess inventory is continually cleared, and that foreign currency fluctuations are going to make international sales look weak. During the conference call, management also noted that SG&A costs will rise more in Q1 because of " strategic investments in Demand Creation around key sporting events such as the Olympics and the European Football Championships."

When Nike reports Q1 results toward the end of September, expect many headlines to question Nike's long-term potential, just as they did after the lackluster Q4 results. However, the market's overreaction to these short term hurdles could be a great buying opportunity into a well performing stock with plenty of growth left.

Even though Q1 earnings are likely to be down year over year as they were in Q4, for fiscal year 2017, Nike expects revenue to rise in the high single digits, gross margin to return to above 46%, and the effective tax rate to be between 19% and 21%. If those things are true, then Nike's 2017 income should rise steadily just as it did in full year 2016, with average analyst estimates predicting fiscal year 2017 EPS to come in 11% higher than 2016 at $2.40 per share.

Long term, Nike still looks to be on track -- or nearly on track -- to meet its previously stated goal of $50 billion in sales by 2020. CEO Mark Parker addressed that during the call, saying "We remain confident in that long-term projection," and noting that increases in e-commerce, growth in China, and other factors will help to continue spurring growth. If margins can remain high and taxes consistent through that time, income would reach $5.8 billion on that $50 billion in sales, a more than 50% jump from 2016 income.

Even if Nike falls short of its $50 billion sales goal, its income still looks on track for impressive growth in the next few years. Because of concerns over the recent short term earnings pressure, Nike shares are down more than 10% since March, for an attractive price to earnings of just 27 times -- 21 times 2017 earnings estimates -- meaning this could be a great time to buy into Nike for a discount. If Q1 results turn out to be lackluster as expected, just remember why Nike continues to look like a good long-term bet and think of this short term hurdle as a buying opportunity.