Please ensure Javascript is enabled for purposes of website accessibility
Log In Help Join The Motley Fool
Free Article Join Over 1 Million Premium Members And Get More In-Depth Stock Guidance and Research
By Andrés Cardenal - Sep 2, 2016 at 8:05AM

What contribution margin is, and what it says about Netflix's profitability levels.

Netflix (NFLX 4.15%) considers contribution margin a key profitability metric to watch, and management puts a lot of attention on this non-GAAP metric when analyzing the company's performance from a financial point of view. Let's take a look at what contribution margin really includes -- or excludes -- and what it's saying about the financial health of the business.

What is contribution margin?

When going through Netflix's financial reports and communications with investors, contribution margin is usually an important topic. Earnings reports show contribution margins for the company's different business segments, and management typically offers forward-looking guidance for this metric, as well as plenty of information regarding the main factors affecting contribution margin during a particular period.

In fact, Netflix considers contribution margin one of the key variables to watch. From the company's 10-K report: "Our core strategy is to grow our streaming membership business globally within the parameters of our consolidated net income and operating segment contribution profit (loss) targets."

Watching contribution margin can provide important information for investors, as it shows operating performance for each segment before global corporate costs. This way we can better evaluate how the business is performing in different divisions. On the other hand, corporate costs still need to be paid for, so contribution margin doesn't really tell the whole story when it comes to company-level profitability.

There is nothing wrong with shifting costs allocation; in fact, it's the right thing to do in order to better reflect the company's growth strategy. Nevertheless, different assumptions and cost-allocation policies can have a considerable impact on contribution margin, and this is an important factor to keep in mind.

The numbers are telling a story

Contribution margin can fluctuate substantially from quarter to quarter, but the long-term picture is certainly encouraging in the U.S. Netflix is facing slowing user growth as the business is maturing at home, but revenue is still outgrowing expenses, and contribution margin is clearly moving in the right direction. 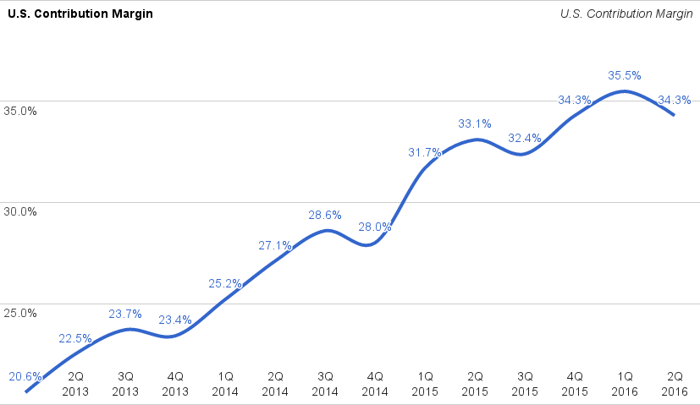 However, it's important to look under the surface when analyzing financial statistics in order to better understand what the numbers are saying. The business is, in fact, profitable in many of the markets where Netflix has a presence prior to 2014. Management said in the last earnings report that all of these markets are currently individually profitable in terms of contribution margin, and they are expected to generate an aggregate contribution profit of nearly $500 million in 2016.

The main reason why Netflix is operating in the red in international markets is that the company is reinvesting the money it makes in those earlier markets to expand into younger territories. This is a crucial distinction to keep in mind, if the business is proving its ability to generate profits in different global markets, then management is making a smart move by aggressively betting on international growth.

In the last letter to shareholders, Netflix highlighted that the business is generating contribution profits in all kinds of international markets, even in those loaded with obstacles. This speaks well about Netflix and its ability to generate profits in the most challenging environments. Management wrote:

We have already achieved success (contribution profits) in many types of markets including those where English is not the main language (e.g. Chile); that have low pay TV penetration (e.g. Australia); that have historically had high levels of piracy (e.g. Nordics); that have payment or broadband infrastructure challenges (e.g. Mexico with payments and Canada with low data caps); that have big competition (e.g. UK); that have low disposable income (e.g. Brazil); or that have many of these factors (e.g. most of Latin America).

Netflix is producing solid profitability in the U.S. While the business is losing money in international markets, this is mostly because of investments for growth, as the company is generating contribution profits in different countries where it has been operating for several years. As long as this continues being the case, rising profitability could be a powerful return driver for investors in Netflix stock over the years ahead.