Wynn Resorts has new developments opening or underway in each of its major markets, but these heavy investments are putting pressure on the balance sheet.

Wynn Resorts (WYNN -0.53%) has kept investors busy in the last few months, announcing a planned overhaul of its Las Vegas resort, finally opening the doors to Wynn Palace, and beginning construction of a new property near Boston. Accompanying all of the development, however, has been billions in debt with more likely to come soon. Is the company heading for trouble?

A surge of development ... and debt

Wynn finally opened its massive new resort in Macau last month August. The Wynn Palace features a $100 million lake that has fountains synchronized to music, air-conditioned gondolas to ferry guests over the water, over 1,700 rooms between multiple hotel towers and private villas, many high-end restaurants and shops, and much more. The price tag for this resort -- over $4 billion.

In April, CEO Steve Wynn told investors about his plans to overhaul the current 18-hole golf course at the Wynn-Encore in Las Vegas, replacing it with "Paradise Park", a $1.5 billion project that will include a giant clear-water lagoon with surrounding beaches and a 1,000 room hotel. On top of all that, construction started in August for the new resort near Boston, which will cost another $1.9 billion to $2.1 billion and open in 2019.

All of that expansion needs to be financed, and Wynn Resorts has been quickly increasing its debt load to do so -- it currently stands at around $9.5 billion. This is up from $3.5 billion just four years ago. We can probably expect the company to take on even more debt in the coming few years to fund its other developments as well. 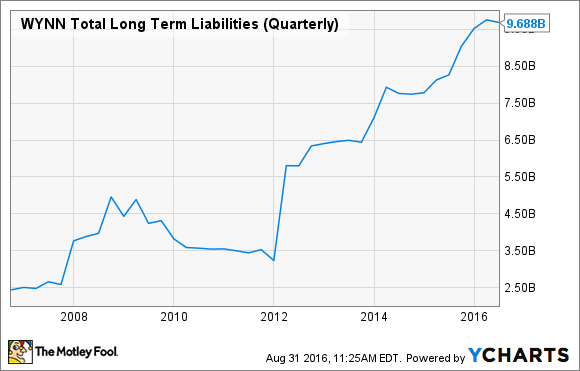 Debt obligations seem sustainable right now, especially since Wynn cut most of its dividend last year and can funnel more cash to interest expenses and other operations. But not everyone is convinced -- earlier this year, the ratings firm Moody's downgraded Wynn based on its debt load, particularly since so much of that debt was taken on for the Wynn Palace in Macau, where the gaming market has fallen drastically over the last two years. The note from Moody's said

Although Wynn's consolidated net debt/EBITDA includes a substantial amount of debt related to the construction of Wynn Palace which has not yet opened, we remain concerned that the ramp up of this property will not occur at a pace and level that will enable the company to reduce net debt/EBITDA much below 6.0 times by the end of fiscal 2017, and well above our stated 3.5 times net debt/EBITDA downgrade trigger.

Is Wynn going to end up as the next Caesars?

It's alarming to see what is happening with Caesars Entertainment, once one of the biggest casino companies in the world but through a series of unfortunately timed buyouts and bets, it now faces almost certain bankruptcy as a result of its own massive debt balance. To be fair, at its peak, Caesars was over $20 billion in debt, far higher than where Wynn is now, but it's worth making sure the company isn't in the early stages of a similar scenario.

Many analysts argue the weakness Macau has experienced over the last two years is coming to an end. This is incredibly important since Macau already makes up about 60% of Wynn Resorts' total EBITDA. Then in Las Vegas, Telsey Advisory Group analysts estimate that the 18-hole golf course at the Wynn-Encore generates EBITDA of $5 million annually, while Paradise Park could increase that to $300 million to $400 million. The resort near Boston could also be a great source of diversification, one of the things that the Moody's analysts said they'd like to see before they can improve their rating again.

The Moody's analysts included in their note that they'd like to see Wynn reduce its net debt/EBITDA below 6.0 times after Wynn Palace opens. That ratio currently sits above 8.0 times. If the new resort in Macau can boost results over the coming quarters and reduce this ratio, the company can build some positive momentum before its projects in Las Vegas and Boston come online. If everything comes together, the projects will be another impressive winning bet for the great Steve Wynn. On the other hand, any hang-ups will be reason for investors to worry.

Seth McNew has no position in any stocks mentioned. The Motley Fool is short Caesars Entertainment. We Fools may not all hold the same opinions, but we all believe that considering a diverse range of insights makes us better investors. The Motley Fool has a disclosure policy.