Gilead's growth may have slowed, but management continues to create deep value for shareholders.

Gilead Sciences (GILD -0.19%) can't seem to find a bottom. Despite the stock trading at a dirt-cheap forward price-to-earnings ratio of 6.8 (cheap, that is, for a large-cap biotech stock), the company's shares have simply failed to catch a bid recently: 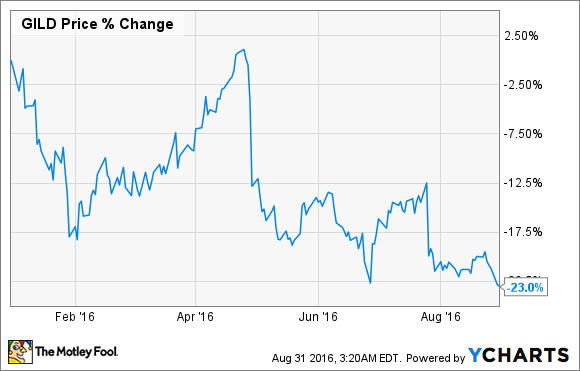 Of course, investors are deeply concerned about Harvoni's second-quarter cliff dive: The star hepatitis C drug saw its U.S. sales fall by more than 50% relative to a year ago. While such a steep decline for a franchise-level product is never welcome news, Gilead hasn't exactly been sitting idly by in 2016. In fact, the biotech has made at least five key moves this year designed to create deep value for shareholders.

1. In January, Gilead cemented a global license and collaboration agreement with Galapagos NV (GLPG -1.33%) for experimental anti-inflammatory drug filgotinib. The reason this move should excite investors is twofold. First, filgotinib is being developed as an oral treatment for rheumatoid arthritis, Crohn's disease, and ulcerative colitis. This gives it megablockbuster potential, depending on how AbbVie's (ABBV 1.03%) competing oral selective JAK1 inhibitor, ABT-494, pans out in its broad late-stage clinical program. Second, Gilead didn't break the bank to bring filgotinib into the fold, reportedly investing only $725 million upfront in this collaboration with Galapagos NV, while back-loading the deal with an additional $1.35 billion in milestone payments.

2. Over the course of March and April, Gilead grabbed two FDA approvals for its cornerstone HIV franchise. Specifically, the agency approved the biotech's TAF-based regimens Odefsey and Descovy. These two new TAF-based HIV medicines would go on to help boost the biotech's quarterly HIV sales by a healthy 14.8% in the second quarter this year, compared to the same period a year ago.

3. In April, Gilead took another step to shore up its liver disease franchise with a $400 million upfront payment for Nimbus Apollo and its Acetyl-CoA Carboxylase inhibitor program. As a result, the biotech now sports perhaps the most robust pipeline of experimental nonalcoholic steatohepatitis (NASH) drugs in the industry, and that's no small feat. After all, the Street thinks that an effective NASH treatment could generate upwards of $10 billion in peak sales, although, in reality, the market is most likely to be split among a couple of different players.

4. In late June, the biotech announced the FDA-approval of its latest hepatitis C drug Epclusa. Epclusa is a key piece of the puzzle, as it's the first all-oral, pan-genotypic, single tablet regimen to hit the market. Simply put, Gilead's already formidable competitive moat against AbbVie's Viekira Pak, as well as Merck's Zepatier, grew arguably 10 feet wider with the approval of Epclusa.

5. Gilead's decision not to overpay for a major acquisition so far this year is looking like the biotech's best move overall. While rival drugmakers like AbbVie have willingly maxed out their balance sheets to acquire new growth products, Gilead has instead chosen to strike smaller deals such as its recent acquisition of Nimbus. The net result is that Gilead is on track to exit 2016 with over $30 billion in cash, cash equivalents, and marketable securities, giving it plenty of fuel to pursue either a single large acquisition or a series of smaller, value-creating deals moving forward.

Although Gilead's top line appears set to fall by 6.6% this year and by almost 3% next year, Gilead remains a great value stock for patient investors. By valuing Gilead almost exclusively on the prospects of its hepatitis C franchise, after all, the market has missed the biotech's impressive clinical pipeline of NASH product candidates, and is basically saying that AbbVie's ABT-494 is destined to clobber filgotinib. In short, you can buy Gilead right now for its still-healthy hepatitis C franchise, and get its pipeline basically for free.

Unfortunately, the market's extremely dire outlook toward Gilead probably isn't going to change until the biotech opens up the coffers to enter the M&A bonanza. Without even speculating about possible targets, though, it's not hard to get excited about the diversity of promising biotechs and biopharmas that could be acquired with a war chest of around $30 billion. In short, Gilead is almost certainly going to make a major move on the M&A scene within the next year, meaning that it might be wise to grab some shares while this biotech continues to trade at a steep discount relative to its peers.