Back in 2013, microprocessor giant Intel (NASDAQ:INTC) released a series of chips based on its Haswell architecture (fourth-generation Core) with a graphics technology known as Iris Pro. This graphics technology made the chip larger and more expensive to make than the variants without Iris Pro, but performance in graphically intensive applications such as 3D games went up significantly.

For the right customers, such as Apple (NASDAQ:AAPL), the product family made sense.

An early leak suggested that Intel also planned to introduce an Iris Pro-powered variant of its Kaby Lake architecture (seventh-generation Core). However, I believe that it is very likely that this product has been canceled.

In a product brief that Intel posted alongside the announcement of its seventh-generation Core processor family, it included the following slide: 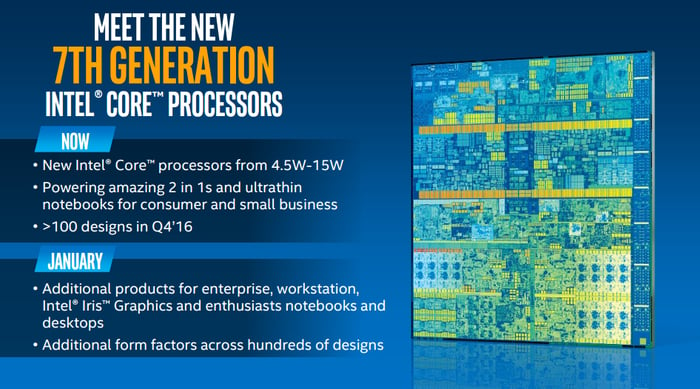 Although the above should be enough to raise the proverbial yellow flag, there's even more evidence.

Take, for example, a recent leak from NotebookCheck.net, of what looks like an Intel internal slide showing the launch timelines for each of the seventh-generation Core processors. It lists the following chip variants:

Don't worry too much about the specifics, but a seventh-generation Core processor with Iris Pro graphics would have been an 'H' series processor (high-performance notebook) in a 4+4e configuration (four processor cores + GT4 graphics + eDRAM). This configuration is absent from this particular leak.

If that weren't enough, there's still even more evidence. NotebookCheck.net also got its hands on another image that appears to be from Intel, showing the company's planned seventh-generation Core processor product stack. Unsurprisingly, it, too, lacks a 4+4e part.

Intel's Iris Graphics processors in low-power laptops appear to be doing well and are gaining momentum, something that should serve to enrich the company's notebook product mix. This makes sense, as an integrated graphics solution is generally preferable for size and battery life in the kinds of laptops that would use either a 15-watt or 28-watt processor.

Customer demand for Intel processors with Iris Pro graphics may simply not be there, particularly as the high-performance laptops that Iris Pro would be suitable for can generally support stand-alone graphics processors without much issue. And, if personal computer manufacturers are, by and large, not interested, then it makes little sense for Intel to invest further in that product line (especially in light of the company's recent restructuring actions).

I think the big "tell" for whether Iris Pro has a future will be the processor Apple uses when it updates the 15-inch MacBook Pro (rumored for later this year). If Apple uses a chip with Iris Pro, then the technology may have a future. If Apple simply uses a quad-core chip with GT2 graphics (in other words a "4+2" configuration) in the system, then it may be "game over" for Iris Pro.