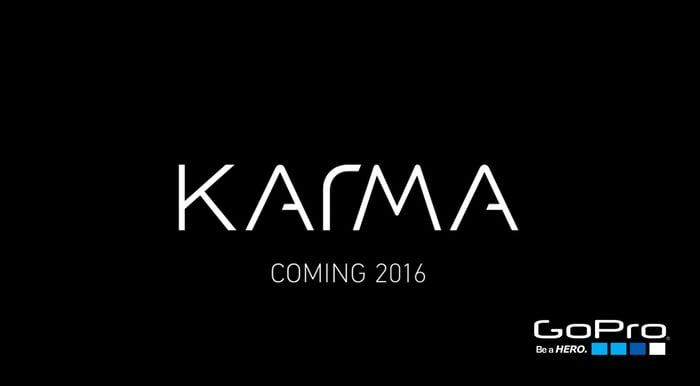 When GoPro (NASDAQ:GPRO) delayed the planned first-half 2016 release of its widely anticipated Karma quadcopter earlier this year, its founder and CEO, Nick Woodman, blamed its "revolutionary features that differentiate it from other drones."

More specifically, Woodman stated GoPro needed more time to fine tune those features. And without offering specifics on what makes Karma so special, he also insisted it would arrive in time for the lucrative 2016 holiday season.

That's not to say investors and consumers have been left completely in the dark about Karma. Late last week, GoPro offered the world a coy look at its new drone with this short teaser video:

So what's the big deal? After all, the clip doesn't show the actual Karma drone, but rather provides a closer look at video presumably captured from it -- and a mere 12 seconds of the captured video at that before GoPro's Karma logo appears.

When you really dig in, however, this offers significantly more information about Karma than it first appears. Here are four things GoPro revealed with its latest Karma teaser:

First -- and unless GoPro simply cut off the footage after one disastrous take -- it seems remarkable that Karma can not only fly with great precision this close to the ground while steadily panning to one side, but also withstand the powerful air current that would inevitably be generated by a van passing over the drone at what appeared to be normal road speeds.

DJI's Phantom 4 drone, for example, lists a respectable vertical hover accuracy of plus or minus 0.1 meters (or roughly 4 inches) when its Vision Positioning System (VPS) is active (0.5 meters when it's not), and a horizontal hover accuracy of 0.3 meters with VPS active (1.5 meters otherwise).

By contrast, Karma appears to be operating within a significantly smaller window of vertical and horizontal accuracy. To accomplish this feat while keeping the Karma drone intact would require exceptionally fine-tuned controls, as well as advanced corrective systems to account for unforeseen changes in the drone's surrounding environment as the van passes over.

Next, Karma's low-elevation footage also seems to indicate the drone enjoys a slim physical profile, whereas many of the most popular drones on the market tend to be at least 10 to 12 inches tall.

That's not to say its likely small size should be entirely surprising. Recent patent applications have indicated Karma could possibly sport a "QuadBox" design with propellers that fold into a self-enclosed rectangular box -- though the nature of patents far from guarantees this design will ever come to fruition, let alone in GoPro's first-gen Karma drone. But if Karma indeed arrives in a delightfully compact package, it would seem to fit with GoPro's existing propensity for designing cameras whose tiny footprints push the limits of what's possible with a high-end capture device.

It's also interesting that the clip is completely absent of the propeller noise that tends to plague some drone videos. Of course, you would expect GoPro to have top-notch video quality -- which is obviously on full display here as well -- given its aptitude in video capture devices. But collecting decent audio from a drone is no easy task. And in this case, while you cannot hear Karma's rotors spinning as it pans, you can clearly hear the sound of the approaching van, almost as though the latter is the only audio in the scene. If this is indeed audio and video captured from Karma without any post-production filtering, color me impressed.

Finally, near the end of the video GoPro provides a specific date to "watch" Karma on GoPro.com: September 19, 2016. That's less than two weeks from today. And if GoPro confirms on that day that it has successfully implemented each of the three aforementioned differentiating features in its new drone, I suspect Karma will prove to be more than worth the wait.