Please ensure Javascript is enabled for purposes of website accessibility
Log In Help Join The Motley Fool
Free Article Join Over 1 Million Premium Members And Get More In-Depth Stock Guidance and Research
By Matthew DiLallo – Sep 8, 2016 at 11:30AM

Silver Wheaton (WPM 1.99%) is a different kind of precious metal stock. Instead of exploring for gold and silver and then constructing and operating the mines, it just pays an upfront fee to support the construction of another company's project. That enables it to get access to the mine's future silver and gold production for a low fixed cost. It is a business model that sets it apart from traditional miners, providing it with five competitive advantages over the competition: 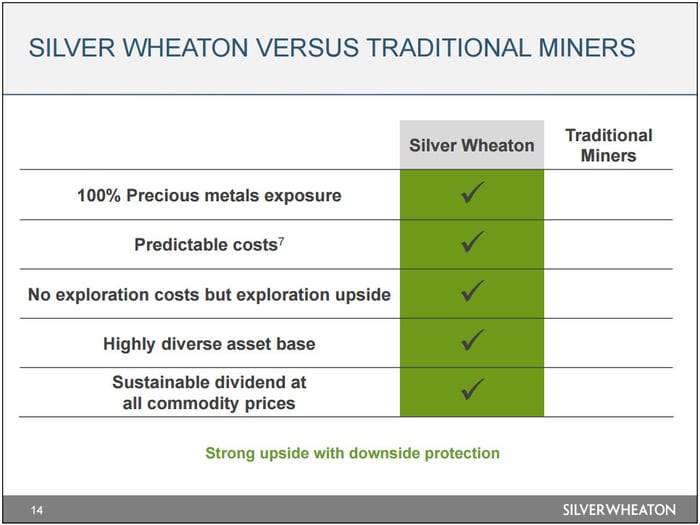 Silver Wheaton only has exposure to gold and silver prices. Contrast this with other "pure-play" producers that aren't quite as pure as they say. For example, First Majestic Silver (AG 5.10%) bills itself as a pure silver producer. However, while 69% of its production last year was silver the company also produces lead and zinc, which accounted for 13% and 6% of production, respectively. Likewise, Hecla Mining (HL 2.34%) isn't exactly a pure play on precious metals because 10% of its output is zinc and 8% is lead. Those commodities have the potential to weigh on profits because their prices do not always correlate with precious metal prices.

An even more important competitive advantage is Silver Wheaton's predictable costs. Because of its streaming arrangements, the company will be able to buy silver at a low fixed cost of just $4.57 an ounce through 2020. Contrast this with Coeur Mining (CDE 0.29%), which had all-in sustaining costs of $10.15 per ounce last quarter and $10.82 per ounce in the first quarter. That variability in costs can have a significant impact on Coeur Mining's profitability in the future if costs rise when prices sink.

Another important differentiator is that Silver Wheaton has no exploration costs but still retains exploration upside. Its streaming agreements limit its exposure to the upfront fixed payment and as a result, it does not have to dip back into its pockets to pay for any exploration cost overruns, which are pretty common in the mining industry. That said, it still benefits from the additional production when the mine finally comes online.

An overlooked advantage is Silver Wheaton's diversification. Not only does its portfolio include 22 operating mines and eight development projects but those assets are on three continents. Contrast this with First Majestic Silver, which only operates in Mexico or Hecla Mining, which just has four producing mines in North America. That lack of diversification could have a significant impact on production and profitability if a major weather event, mine collapse, or work stoppage occurred.

Finally, Silver Wheaton has a sustainable dividend policy based on paying out 20% of the average of its previous four quarters' operating cash flow. While that leads to a fluctuating payment, the company has not suspended its dividend during tough times like its rivals: 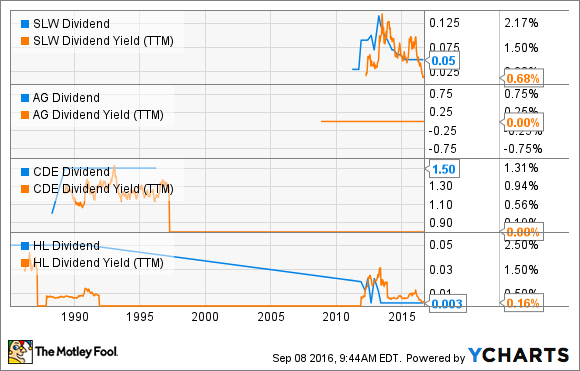 As that chart shows, First Majestic Silver has never paid its investors a dividend, while Coeur Mining has not paid one this century and Hecla Mining went decades without paying a dividend.

These five competitive advantages provide Silver Wheaton investors with two things: Strong upside with solid downside protection. Not only does the company's profits rise with the silver price, but it also benefits from higher production as new mines come online. However, its fixed costs and diversification provide it a safety net when things do not go according to plan.

Matt DiLallo has no position in any stocks mentioned. The Motley Fool owns shares of Silver Wheaton. Try any of our Foolish newsletter services free for 30 days. We Fools may not all hold the same opinions, but we all believe that considering a diverse range of insights makes us better investors. The Motley Fool has a disclosure policy.