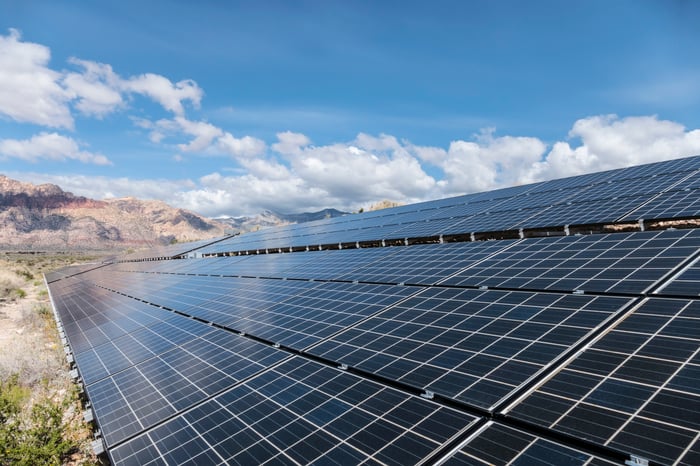 2016 started with high hopes for Canadian Solar Inc. (NASDAQ:CSIQ) and most of the solar industry. Solar panel prices were stable, demand was growing, and profits were finally starting to roll in.

But as the year's gone on, it's become more evident that strength in early 2016 could be followed by a rough second half of the year and potentially a worse 2017. Here's the biggest mistake Canadian Solar made during the year. 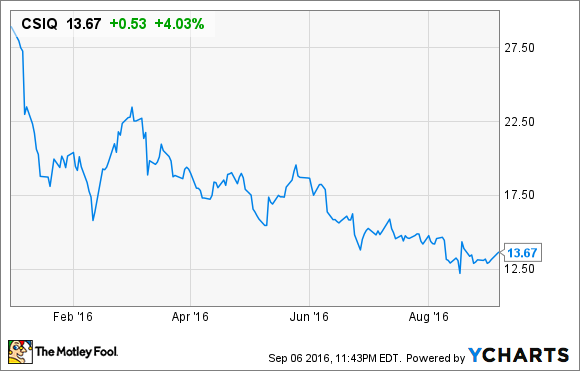 Projects go from asset to liability

Over the last three years, solar companies like Canadian Solar have been building projects on their balance sheet in hopes of selling completed projects at higher margins than if they sold them earlier in the process, or launching their own yieldcos. In Canadian Solar's case, the yieldco was the ultimate goal, but that plan has fallen apart as yieldco stocks have dropped.

As a result, Canadian Solar has 472 MW of projects sitting on its balance sheet that could be losing value. Management estimated in the second-quarter 2016 earnings report that the projects would be worth $850 million in a sale and generate a margin contribution in the mid teens, but that may be an optimistic estimate.

The yieldco market has seen dividend rates rise, which has increasing the rates of return needed to buy projects. And SunPower (NASDAQ:SPWR) raised concern when it said that projects it has recently sold have gotten lower prices than anticipated. If the same is true for Canadian Solar, it'll be bad for the company's bottom line.

Where Canadian Solar really failed was not launching a yieldco before the market fell apart. The company started stockpiling projects in an effort to build a yieldco but didn't have enough scale until recently to think about a yieldco IPO. And an IPO into a weak yieldco market wouldn't be wise at all.

The failure may have come from the idea that Canadian Solar needed to go it alone in a yieldco. SunPower got into the yieldco market with First Solar when they launched 8point3 Energy Partners in 2015, a joint venture that brought two solar powerhouses together. Canadian Solar could have partnered with another smaller developer like 8minutenergy or Sunrun, which could have added a flow of projects to the yieldco.

It isn't that a yieldco is the most critical thing ever for a solar company to have. But it adds diversification to the financing options a company has and creates a ready-made buyer for projects. Now, Canadian Solar has to either keep projects on the balance sheet or take what the market gives it for prices.

Financing is the lynchpin in solar

When solar companies fail, it's usually because they add too much debt and can't finance their next project. And with $3.3 billion in debt and payables, Canadian Solar has a lot of leverage on its own balance sheet.

Not having the flexibility to sell projects to a yieldco could be a missed opportunity when, in a difficult industry, it's flexibility that every solar company needs.