The company is raising cash by selling shares following a hype-induced rally.

With shares of Advanced Micro Devices (AMD -3.23%) soaring this year, driven by hype surrounding its Polaris GPUs and upcoming Zen CPUs, it's not surprising that the company is taking advantage of its elevated stock price. AMD plans to sell approximately $600 million worth of new shares for $7.51 a pop, a price that's about four times higher than where the stock price stood at this time last year. Another $450 million will be raised by selling convertible notes, with the cumulative proceeds going toward paying down AMD's existing debt. 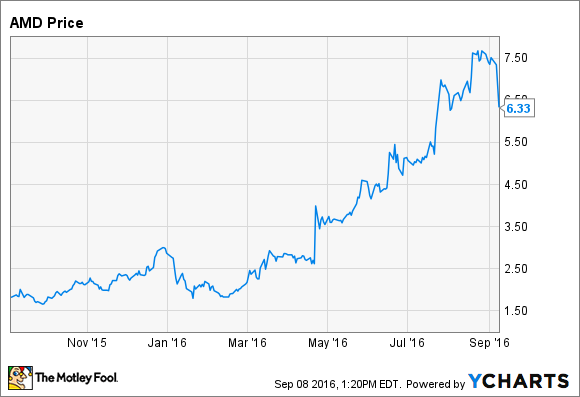 Investors aren't thrilled about the dilution that this stock sale will cause, knocking down the stock for two days in a row following the announcement. But for AMD, it's a great move that will shore up its balance sheet ahead of the launch of Zen next year.

AMD expects to sell about 79.9 million shares, assuming an offer price of $7.51 per share. The net proceeds of the deal will be approximately $581.3 million, or as much as $668.6 million if the underwriters exercise their options to buy an additional $90 million worth of stock. AMD's diluted share count stood at 821 million at the end of the second quarter, meaning that this offering will increase the share count by nearly 10%.

AMD is also selling $450 million worth of convertible senior notes due in 2026, with the company expecting net proceeds of $439.1 million, or as much as $505.1 million if the underwriters exercise their over-allotment option. The interest rate and conversion price have yet to be determined according to the SEC filing detailing the offering. These convertible notes will cause additional dilution.

In total, AMD could raise as much as $1.17 billion through these two offerings. The company plans to use this money to pay down existing debt, including $226 million that AMD borrowed under a revolving credit line, and up to $1.02 billion worth of outstanding senior notes due in 2020. Those notes yield 7.75%, giving AMD the opportunity to reduce its annual interest expense.

Until the offerings are complete and more details are known, the exact impact on AMD's interest obligations can't be determined. Over the past 12 months, AMD paid $161 million in interest on about $2.24 billion of debt. That interest represents a barrier to AMD returning to profitability, and reducing it by potentially tens of millions of dollars annually will reduce the time it takes for the company to put an end to its long string of losses.

Because AMD plans to use the proceeds for paying down debt, the company's cash balance shouldn't be affected all that much. However, a deal earlier this year that resulted in AMD selling its assembly and test facilities into a joint venture raised about $320 million, boosting the company's cash balance to a comfortable level. At the end of the second quarter, AMD was sitting on nearly $1 billion of cash thanks to that deal.

For investors, the dilution caused by the stock and convertible offering will reduce per-share earnings in the event that AMD returns to profitability. But the reduction in interest payments will boost profits, so it's not all bad news. Had AMD decided to sell additional shares a year ago, when the stock was in the doldrums, the dilution would have been much worse.

With the first Polaris graphics cards already launched, AMD's third-quarter report should shed some light on how the graphics business has fared. Zen won't arrive in volume until next year, so investors still have a while to wait before it's clear whether AMD's plan to effectively compete with Intel comes to fruition.

By selling stock now, when the hype surrounding these products is at a fever pitch, AMD is maximizing its ability to reduce its debt load. In the long run, despite the dilution, that's a good thing for investors.

Timothy Green has no position in any stocks mentioned. The Motley Fool recommends Intel. We Fools may not all hold the same opinions, but we all believe that considering a diverse range of insights makes us better investors. The Motley Fool has a disclosure policy.