Believe it or not, it's reasonable to think that B of A's stock could soon trade for $20 a share or more.

Shareholders of Bank of America (BAC -0.79%) haven't seen its stock trade for more than $20 a share in nearly a decade -- the last time it did so was in October 2008, one month after Lehman Brothers' failure -- but that could soon change.

To be sure, this year has been anything but smooth for the nation's second-biggest bank by assets (or, for that matter, any bank). The sector has been weighed down by concerns about slowing growth in China, the viability of the European Union following the United Kingdom's vote in June to leave it, and persistently low energy prices, which have caused a growing number of energy companies to default on their bank loans.

The impact from these trends on bank stocks is clear if you look at the KBW Bank Index, which tracks shares of 23 large publicly traded commercial banks -- until recently, the index tracked 24 bank stocks, but one of them, First Niagara Financial Group, just merged into another, KeyCorp.

Since the beginning of the year, the KBW is down 1.%. That's better than Bank of America, which has seen its share price drop by 6.7% year to date, but it trails the S&P 500, which is up nearly 7%. 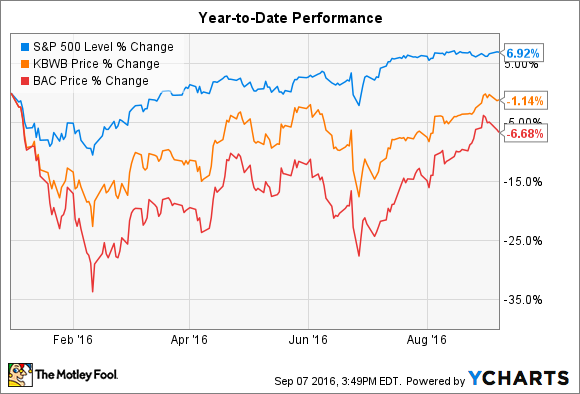 But what's important to appreciate is that this reveals only part of the story, and a somewhat dated part at that. In the time since these concerns peaked in February, Bank of America's shares have climbed by more than 40%. And there's reason to think that they're headed higher from here.

It wasn't until last year that Bank of America was able to consistently generate a respectable quarterly profit. After slaying more than $200 billion worth of financial crisis-related costs, it earned nearly $16 billion in 2015. It was the first time since 2007 that the Charlotte, North Carolina-based bank had reported decent profits in four consecutive calendar quarters.

Bank of America needs to continue improving in this regard if it wants to see its share price eclipse $20 a share, but that threshold is now within its grasp. All it should take at this point is a little nudge in interest rates, which, if the latest comments emanating from the Federal Reserve can be believed, could happen by the end of this year.

The president of the Federal Reserve Bank of Richmond, Jeffrey Lacker, testified to Congress on Wednesday that there's a "strong case" for a rate hike in September. It's impossible to say for sure what this would do for Bank of America's share price, but what we do know is that a 100-basis-point increase in interest rates would translate into $7.5 billion more net interest income for the bank.

That added income, which won't come all at once given that rates will probably increase in increments of 0.25%, will almost certainly boost the valuation of Bank of America's shares. Right now they trade for a 34% discount to book value, which certainly seems cheap when you consider that most bank stocks during normal times are priced well in excess of their book values.

Consequently, even if Bank of America's shares reach $20 in the near future, they'll still be priced at 13% below book value. While $20 a share may seem overly optimistic, in other words, it's actually pretty modest.