Crude prices bounced higher this week, ending up more than 4% on the strength of an unexpected drawdown in crude oil inventories. The rally had a noticeable impact on energy stocks, which were largely higher this week, but crude was not the only catalyst driving most of this week's biggest moves. The biggest gainers, according to data from S&P Global Market Intelligence, included Natural Resource Partners (NYSE:NRP), Spectra Energy (NYSE:SE), Chesapeake Energy (OTC:CHKA.Q), Apache (NASDAQ:APA), and Calumet Specialty Products Partners (NASDAQ:CLMT): 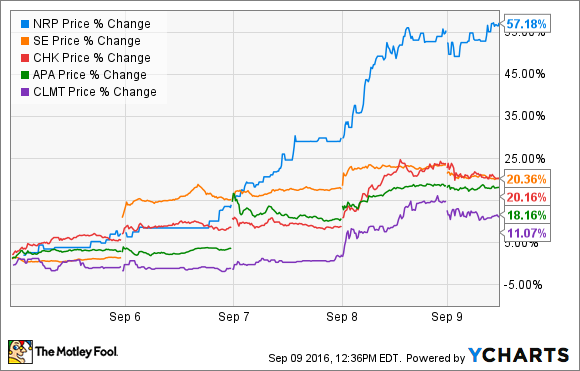 Natural Resource Partners did not have any company-specific catalysts driving its sharp rebound. That's not surprising considering that the MLP's unit price moved around quite a bit over the past month without any news. In fact, last week's rebound just returned units back to where they were a month ago: 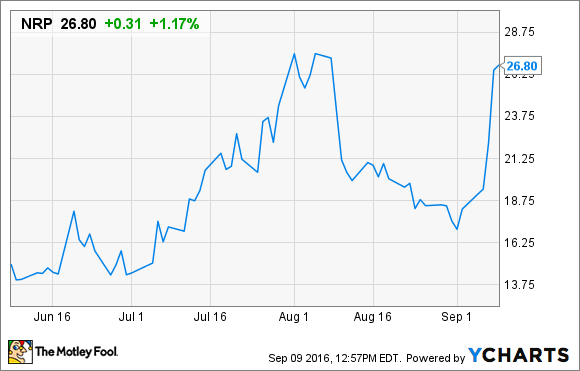 Natural gas pipeline-giant Spectra Energy, on the other hand, had a significant news-driven catalyst. The company announced that it agreed to be acquired by Canadian pipeline-giant Enbridge (NYSE:ENB) in an all-stock deal valued at $28 billion. The transaction would create the largest energy infrastructure company in North America with a $127 billion enterprise value. Investors and analysts liked the deal because of its simplicity and the limited overlap between Spectra Energy's assets and Enbridge's.

Meanwhile, natural-gas-giant Chesapeake Energy jumped after its CFO, Nick Dell'Osso, presented at an industry conference. The CFO said that the company cut its leverage by 50% since 2012 and is targeting another $2 billion to $3 billion in future debt reduction. Further, Chesapeake Energy is now targeting to grow production by 5% to 15% annually through 2020 while aiming to be cash-flow neutral by 2018.

Apache also provided investors with a bullish outlook after announcing the discovery of the Alpine High oil play in Texas. The oil company believes that its acreage position holds 3 billion barrels of oil, and 75 trillion cubic feet of natural gas. With that massive discovery on its hands, Apache plans to accelerate drilling in the play, adding $200 million to its 2016 capital expenditures (capex) budget to drill more wells. The company sees decades of growth opportunities in the future as it develops its extensive acreage position.

Finally, Calumet Specialty Products Partners, like Natural Resource Partners, did not have any news-driven catalysts. Instead, the MLP made up some of the ground it lost over the past couple of months after investors sold off units due to its weak earnings report and troubled financial situation.

For the most part, the double-digit rallies in Natural Resource Partners and Calumet Specialty Products Partners were just meaningless noise. On the other hand, Spectra Energy, Chesapeake Energy, and Apache each released potentially thesis-altering news this week, with all three companies seeing significant growth potential in the years ahead. Even through the market quickly baked in the good news, there appears to be ample upside for all three companies.