Investors in TherapeuticsMD (NASDAQ:TXMD) were subjected to a rough month. Shares of the women's health company dropped more than 11% in August, according to data from S&P Global Market Intelligence. That was quite a bit worse than the general decline in the healthcare sector as measured by the Vangard Health Care ETF (NYSEMKT:VHT). 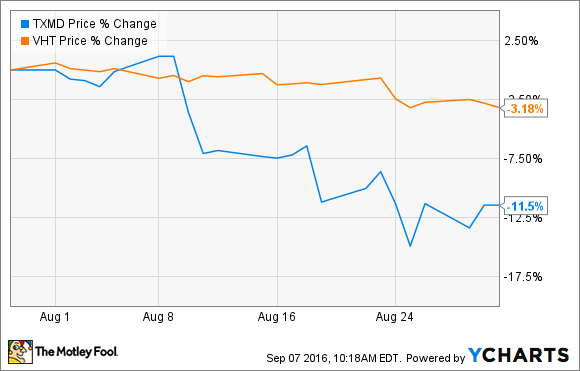 The fall looks primarily attributable to an investment firm turning bearish on the company's stocks halfway through the month. The investment research firm Zacks downgraded shares to a sell after the company reported its second-quarter earnings results.

TherapeuticsMD headline numbers from the quarter didn't look great. Revenue came in at $4.4 million, which was down 9% when compared to the year-ago period. That also came up short of the $5.6 million in revenue that Wall Street had projected.

The lower-than-expected revenue trickled down to the bottom line as well. The company posted a net loss of $21.1 million during the quarter, or $0.11 per share. That was about a penny more than analysts forecasted.

Given the worse-than-predicted quarterly results and negative note from an investment firm, it's not hard to understand why shares took a tumble during the month.

Regardless of the short-term price movement investors should keep their eyes focused on the company's pipeline, which has some big catalysts coming in the months ahead.

First, the company recently submitted its lead compound, Yuvvexy, for Food and Drug Administration approval. This drug was formerly known as TX-004HR and is a potential treatment for dyspareunia, or vaginal pain during sexual intercourse caused by menopause. This drug performed quite well in phase 3 clinical trials and some estimates call for peak sales of $1 billion if it can win approval.

The second program that's worth keeping an eye on is TX-001HR, which is the company's drug candidate for treating vasomotor symptoms due to menopause. Top-line data from its phase 3 Replenish trial is expected in the fourth quarter of this year. If the drug goes on to win approval, it could also eventually produce peak sales measured in the hundreds of millions of dollars annually or more, so this is another drug that's worth watching.

Overall, TherapeuticsMD's future is still very much tied to the success or failure of both Yuvvexy and TX-001HR, so if you were bullish or bearish on those drug candidates going into August, I see no reason to change your stance based on the falling share price alone.