Please ensure Javascript is enabled for purposes of website accessibility
Log In Help Join The Motley Fool
Free Article Join Over 1 Million Premium Members And Get More In-Depth Stock Guidance and Research
By George Budwell – Sep 12, 2016 at 11:22AM

Clovis could be closing in on a key regulatory approval.

Shares of Clovis Oncology (CLVS -2.91%), a cancer-focused biophama, gained more than 64% for the month of August, according to data from S&P Global Market Intelligence. 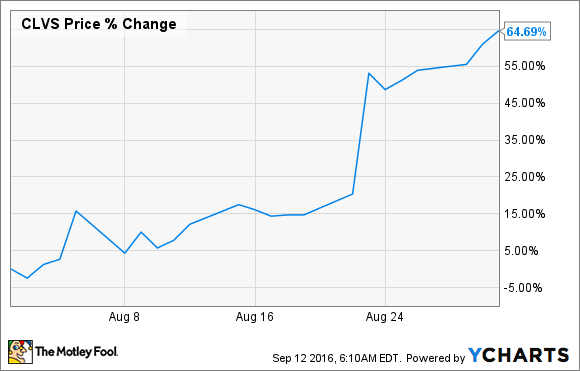 Clovis' stock took flight last month after the U.S. Food and Drug Administration accepted the company's New Drug Application (NDA) for the PARP inhibitor rucaparib as a later line treatment for advanced ovarian cancer in patients with deleterious BRCA-mutated tumors. PARP inhibotors work by blocking a particular enzyme that repairs DNA. Preventing cancerous cells from repairing themselves should lead to their death.

What seems to have really captured the market's attention, though, is the FDA's decision to grant this drug priority review status. In short, a priority review allows for a shorter review time (6 months instead of 10 months, on average) and implies that the agency views rucaparib as a major advancement in the treatment of BRCA-positive ovarian cancer. The FDA is expected to hand down its final decision by Feb. 23, 2017.

Apart from the Street's rosy billion-dollar-plus peak sales estimates for rucaparib, a regulatory approval could transform Clovis into a rather compelling buyout target. Big pharma has shown a particularly keen interest in gobbling up novel cancer drugs like rucaparib in this current environment fueled by growth by acquisition.

Last week, Clovis announced that the FDA will forgo an advisory committee meeting to discuss rucaparib's NDA, implying that the agency hasn't run into any major issues during its own internal review. As such, the drug looks like it will be approved in the not-so-distant future, although nothing should be taken for granted when it comes to the FDA.

But if all does go as planned and rucaparib is approved, investors shouldn't be surprised if AstraZeneca (AZN -0.04%) and Gilead Sciences (GILD -0.02%) emerge as the biotech's top suitors. Rucaparib, after all, would dovetail nicely with AstraZeneca's burgeoning ovarian cancer franchise that includes the PARP inhibitor Lynparza. And Gilead is currently on the hunt for a cancer drug to solidify its modest oncology franchise, and help it overcome the decline in sales of its hepatitis C drug Harvoni.

For what it's worth, Pfizer (PFE -0.01%) may also be lurking in the shadows, given its familiarity with rucaparib and the drugmaker's growing interest in the high-growth oncology market. After all, Clovis originally obtained the worldwide rights for rucaparib from Pfizer back in 2011. Moreover, Pfizer still needs to add a few more pieces to its Innovative Health unit ahead of a possible break-up, perhaps making a bolt-on acquisition like Clovis a prime target.

Although a buyout is a real possibility, investors certainly shouldn't buy Clovis -- or any stock, for that matter -- for this reason alone. However, Clovis does seem to still offer a fair amount of upside based on rucaparib's commercial potential, despite its hefty surge last month. And that's arguably the primary reason risk-tolerant investors may want to take a deeper look at this speculative biotech ahead of this key regulatory decision.

Why Clovis Oncology Stock Is Crushing It Today
351%