People have been asking Apple (NASDAQ:AAPL) to kill off 16 GB iPhones for years, arguing that such a paltry amount of storage was insultingly low. The critics are right on that front, but Apple was able to fend off the backlash for quite a while. Last year's iPhone 6s started at 16 GB, but this year Apple has given in to consumer pressure and doubled all storage capacities, with the entry-level model now starting at 32 GB.

The thing is that investors should have appreciated the stubbornness, particularly after Apple introduced a new pricing structure in 2014 that strongly encouraged upsells. In 2014, mid-tier storage quadrupled to 64 GB for an extra $100. Combined with the introduction of the larger Plus models, the net result was a strong lift in iPhone average selling prices (ASPs) over the next two years.

What happens now that the 16 GB model is dead?

It's long been obvious that 16 GB of storage really is insufficient for the vast majority of modern smartphone users. Apple defended itself by pointing to increased adoption of cloud storage and services, but that defense doesn't hold much water once you add 4K video recording to the device. The real question is whether or not 32 GB is actually sufficient for people's needs, in which case the mid-tier upsell (which is now 128 GB) is less compelling. Quadrupling storage for $100 is still appealing, but less necessary than before. Simply put, the upsell used to be a no-brainer, but now the customer actually has a decision to make. 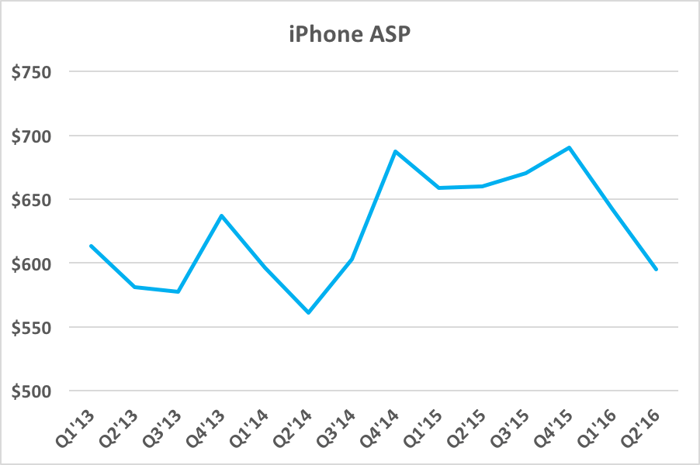 To be clear, there are definitely some potential mitigating factors that could offset any lower uptake in storage upgrades. Fellow Fool contributor Ashraf Eassa points to the fact that the iPhone 7 Plus models are getting a strong differentiating selling point in the dual-camera system, combined with the modest $20 price increase relative to prior Plus models. On top of that, the new jet black color that Apple touted at length in the unveiling presentation is exclusive to the 128 GB and 256 GB variants.

iPhone ASPs did post a notable sequential decline last quarter to $595, down from $642 in the first quarter, but this was driven primarily by the recent introduction of the iPhone SE. That entry-level 4-inch device starts at just $400 while including pretty competitive internal specs.

For what it's worth, Apple expects ASPs to recover this quarter as the 7 and 7 Plus launch, but we'll have to wait to see by how much.