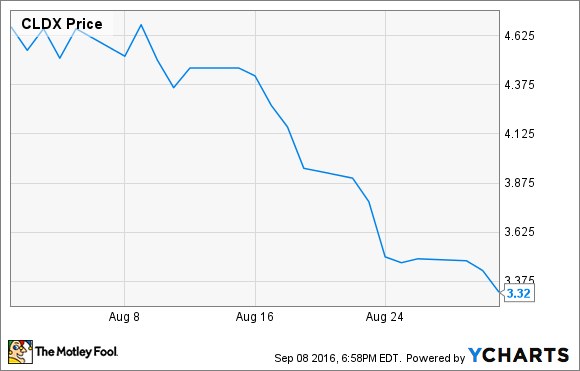 Celldex Therapeutics finished the second quarter with $220.1 million in cash, cash equivalents, and marketable securities, which should be enough to see it through 2018. A combination of factors spooked the market:

Between the beginning of the deal and the end of July, Celldex issued about 1.70 million shares, raising $7.7 million in the process, and the company can request Cantor to purchase up to $52 million more. With 100.55 million shares outstanding, exhausting the remaining $52 million would lead to a 14% dilution at the company's recent stock price of $3.71 per share.

In addition to the pivotal trial in triple-negative breast cancer, Glemba is in four other studies, and Celldex plans on presenting results from a single-agent study in melanoma patients this October. Highly positive results would probably lift the stock -- and lower the potential dilutive effect of issuing shares to fund its extensive clinical-stage pipeline. Success isn't guaranteed, though, which makes the potential dilutive effect impossible to measure.