When offshore drilling contractor Seadrill, Ltd (NYSE:SDRL) reported financial results for its second quarter on August 25, investors got some good news in that the company reported another quarter of improvement on the balance sheet. Cash and equivalents increased, while total long-term debt declined. This was the second quarter in a row of improvement in both of these important metrics: 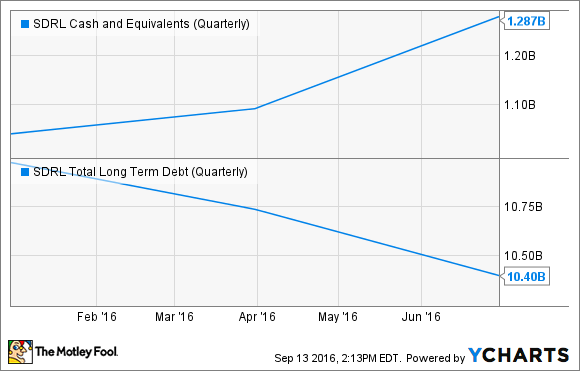 Unfortunately, the news may not be as good as it seems, as it wasn't improved operations and a lower cost structure that drove cash up and debt down, but one-time events that the company cannot count on recurring in future quarters that did most of the heavy lifting.

Let's take a closer look at what happened -- and why investors should continue to be wary of Seadrill for now.

Seadrill started the second quarter with $1.09 billion in cash and $10.74 billion in long-term debt. By the end of the quarter, debt was reduced by $340 million, while cash and equivalents increased $195 million. On the surface, this was good -- a $535 million reduction in net debt. But it wasn't just cash generated by its operations that drove the improvements. Here are three key events in the quarter that played significant roles in improving Seadrill's balance sheet:

What this means going forward

Seadrill is heading toward major debt maturities. By year end, the company must repay or refinance $400 million in debt, and it has a huge $2 billion in notes coming due in June of 2017.

The good news in the short term is that the company does have that $1.29 billion cash cushion that should help it deal with the notes due in December. The bad news? Each passing quarter takes a big bite out of the company's backlog of contracted work, and Seadrill is on pace to see three more of its drilling vessels out of work before the end of 2016. The company has another half-dozen with expiring contracts in the first half of next year.

In other words, an extended downturn in offshore drilling could push Seadrill right to the edge of being unable to meet its financial obligations.

A recovery could change everything, but it's still unclear when that will happen

Numerous experts have called for a recovery in exploration and production investment before year end, and there's some evidence that may happen. The severe capital spending cuts of the past two years will eventually lead to production declines that drive big investment back into offshore drilling. The first clues will come when major oil producers start announcing their capital spending plans for 2017 later this year, and if the bigger names in offshore production indicate they are ready to start spending again, that could be a boon for Seadrill.

But until that actually happens, the company is in a tenuous position, with a shrinking backlog, major debt obligations coming due, and serious limits on its ability to generate cash from its operations to deal with those debt obligations. Before you invest in Seadrill, be sure you understand these very real risks.