The tech titan's line of servers has stopped producing robust growth. What gives?

Over the past few years, networking hardware giant Cisco Systems (CSCO -0.54%) has managed to become a major player in the global server market. Its data center segment, which includes its line of UCS servers as well as related software, was -- until recently -- growing at a double-digit rate. By the first quarter of 2016, Cisco had become the fourth-largest server vendor in the world, tied with Lenovo and behind IBM, Dell, and HP Enterprise, according to IDC.

This once fast-growing business for Cisco has since slowed down. Double-digit growth quickly transformed into no growth at all, with the segment even suffering year-over-year declines in recent quarters. 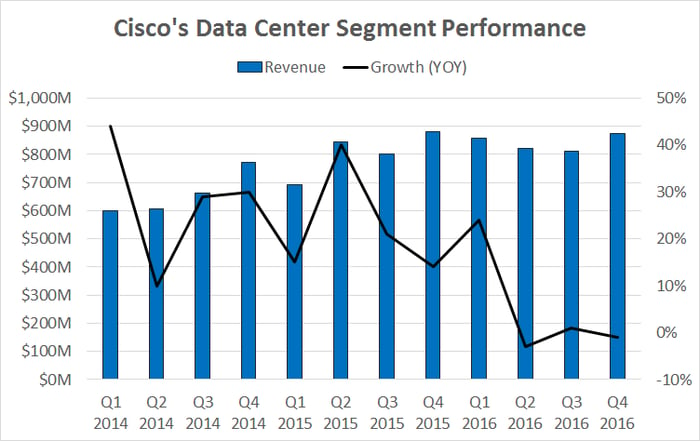 What's behind the sudden slowdown? Here's what management has said on the issue.

A downturn in spending

After producing 24% year-over-year revenue growth during the fiscal first quarter of 2016, a major slowdown occurred during the second quarter. The data center segment contracted by 3% year over year, bringing in just over $800 million of revenue. This marked a sudden end to a long streak of double-digit revenue increases.

During Cisco's second-quarter conference call, CFO Kelly Kramer blamed a slowdown in enterprise spending, but pointed to the company's line of servers as a key piece of its strategy:

Our data center decline of 3% was also driven by a slowdown in spend. In addition, we have tough comparisons from Q2 2015 when revenue grew 40%. UCS continues to be a strong franchise for us and is a foundational piece of our next-generation data center stack.

CEO Chuck Robbins explained that macroeconomic uncertainty can cause the company's customers to delay purchases.

In the same quarter, Cisco's switching business, by far the largest contributor of revenue, slumped 4%, while the wireless business was flat. Security grew at a double-digit pace; Robbins attributed that growth to clients continuing to spend in mission-critical areas while pulling back in others:

I think what we saw was that our customers were spending in areas that are incredibly mission-critical for them even in these times where there is uncertainty. So, you see them continuing to spend in security. You see them continuing to spend in the next-generation data center evolution which was indicative of the 100% growth we saw in that portion of our portfolio. And, I think we saw customers where they had the option to wait, they chose to wait a bit.

These issues continued to negatively affect Cisco's data center business during the third quarter, with Robbins pointing to continued uncertainty in the conference call. But he also explained that shifting enterprise workloads were contributing to stagnating data center revenue:

We also see a transition to rack-based systems which also results in stacks that are driven by container-based architectures, and so in the last quarter 30% of our business was from the rack portfolio which we do have for the appropriate use cases. And you will see us continue to expand our offering so we have UCS as a blade system, we have a rack conversion of UCS, we have HyperFlex in the market and you will see us continue to expand in our portfolio to meet the evolving use cases in the data center. I think that's what's going on right now.

HyperFlex is Cisco's entry into the hyperconverged infrastructure market, which Gartner expects to generate $2 billion of revenue this year and $5 billion in 2019. A hyperconverged integrated system combines compute, storage, networking, and software, allowing each resource to be scaled independently. Cisco is actively moving its business toward software, and its next-generation data center products demonstrate that shift.

When asked by an analyst during the fourth-quarter conference call when the company expects its data center segment to return to growth, Robbins sounded optimistic:

I believe the team has a real clear plan. They've got innovation priorities outlined across all of those platforms, and we'll be executing that over the next few quarters. Kelly and I actually reviewed this just a couple days ago. So I feel good about the leadership there. I feel good about their plan, and now it's about execution.

According to Robbins, HyperFlex is off to a good start, with over 500 customers by the end of the fourth quarter, with a quarter of those customers new to the company's line of servers.

Two factors -- macroeconomic uncertainty and a rapidly changing market for servers -- are keeping Cisco's data center segment from growing. The good news for investors is that the company is investing in next-generation products like HyperFlex, looking to capture what could be a multibillion-dollar opportunity. There's still plenty of growth potential for Cisco in the long run, but it may be a while before the data center segment turns the corner and returns to growth.