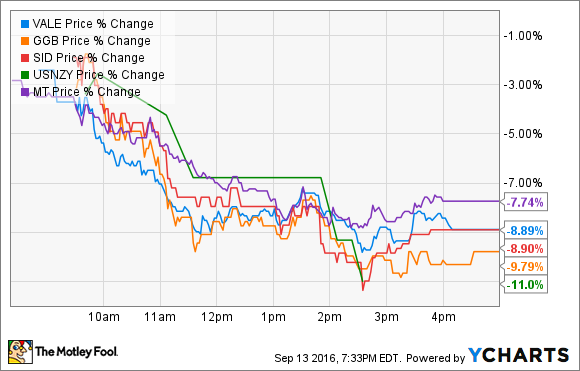 Late on Sept. 12, the U.S. International Trade Commission announced initial determinations that the U.S. steel industry was being "materially injured" by subsidized imports of cold-rolled steel product from a number of countries. The ITC affirmed antidumping and antisubsidy duties against Brazil, China, Korea, Russia, and India. A news release specified the countries of origin of the subsidized products:

The United States International Trade Commission (USITC) today determined that there is a reasonable indication that a U.S. industry is materially injured or threatened with material injury by reason of imports of cold-rolled steel flat products from Brazil, China, India, Japan, Korea, Russia, and the United Kingdom that are allegedly sold in the United States at less than fair value and allegedly subsidized by the governments of Brazil, China, India, Korea, and Russia.

Four of the companies above -- Gerdau, Companhia Siderurgica Nacional, Usinas Siderurgicas de Minas Gerais SA, and Vale SA -- are based in and have major operations in Brazil, which is alleged to be one of the biggest bad actors having paid huge subsidies to these companies to prop up its domestic steel industry.

This is a decided win for domestic steelmakers, including Nucor Corporation (NUE -2.34%) and Steel Dynamics (STLD -0.73%). North America has been flooded with imported steel over the past several years, and it's clear at this point that the countries above have been propping up -- in violation of international trade agreements -- their domestic steelmakers to sell their products in the U.S. at below-market prices.

Conversely, these duties are likely to have a big negative impact on the Brazilian steelmakers above, as well as steelmakers in China, Russia, and Korea, which have benefited from government subsidies. Europe-based ArcelorMittal, the world's largest steelmaker and a major producer in Brazil is a probable exception, as it is more likely to benefit from these duties than to be harmed since it operates steel manufacturing in the U.S., Canada, and Mexico as well, and those units will be able to compete within the North American market just fine. Furthermore, ArcelorMittal's largest market is Europe, which will feel no impact from these duties.

Bottom line: As of this writing on Sept. 14, pretty much all of the steelmaker stocks above are down for the week: 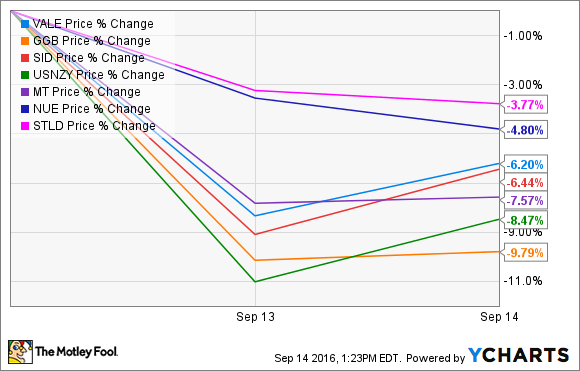 It's going to take some time for the full impact of these duties to become apparent, but it's almost certainly going to work out in the benefit of steelmakers with operations in the U.S. and NAFTA members Canada and Mexico, like Nucor, Steel Dynamics, and ArcelorMittal.

Conversely, it's going to be a detriment to the companies that have benefited from illegal government subsidies in recent years. Even Vale, which is primarily an iron and nickel miner, will feel the impact as its iron mining operations are in Brazil and China. Factor in a Brazilian economy that remains a mess, and there's plenty of reason to avoid those steel companies based in Brazil.