One of the most exciting, albeit risky, developments for investors is when a company makes a significant acquisition. It's a quick way to grow the top line revenue through incremental sales, and also a way to juice the bottom line as companies strive to create synergies between the two and leverage the larger business scale. It's even better when the excitement helps drive up the stock price.

It's that general idea that should have investors of Ritchie Bros. Auctioneers (NYSE:RBA) thrilled, because after the announcement it would be acquiring IronPlanet in a deal worth $758.5 million, its stock jumped 23% on the day of the announcement, suggesting that this could be a great acquisition. Let's take a look at a few reasons this deal makes a lot of sense for Ritchie Bros. and its investors.

In this case, more is better

There are plenty of examples in life of when more isn't always better, but in this case, Ritchie Bros.' acquisition of IronPlanet should only improve the company's existing network effect. Ritchie Bros. operates in a fragmented industrial auction industry and its sheer size means it's more attractive to customers trying to sell its products quickly and efficiently. That, in turn, creates a larger pool of product that lures in the largest buyer base in the world.

While the multitude of brands under Ritchie Bros.' umbrella are focused on different products with different auction specifications, they fit together like a puzzle. 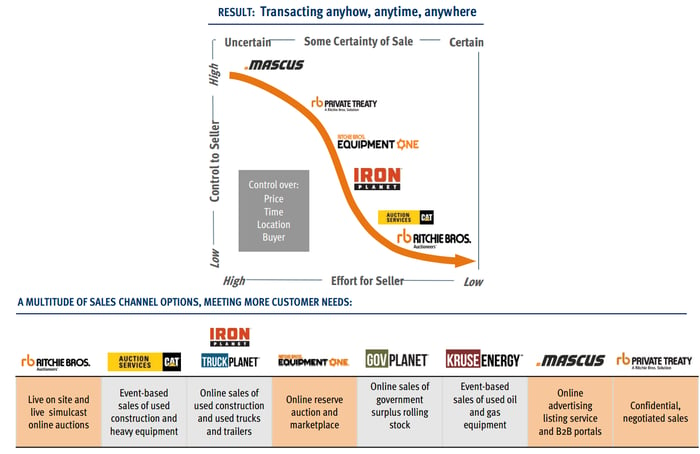 The cat's out of the bag

Caterpillar Inc. (NYSE:CAT) and its dealers own a minority position of IronPlanet, and after completing the acquisition, Ritchie Bros. will operate live on-site auctions for participating Caterpillar Dealers under the Cat Auction Services brand. The initial agreement is for a five-year term and calls for Ritchie Bros. to provide Caterpillar and its dealers access to proprietary auction platforms, software, and other services.

It's an alliance that makes a lot of sense as Caterpillar will gain access to very effective auction tools and a large global audience while Ritchie Bros. will become Caterpillar's preferred global partner for auctions with Caterpillar equipment, ensuring its global customers have more access to "best-in-class" equipment. It was the alliance between Caterpillar and IronPlanet that pushed the latter into its impressive growth phase, and that alliance will only be strengthened with Ritchie Bros. added into the mix.

Factors that shouldn't be overlooked

When a company is acquired, there are a number of small benefits that are easily overlooked. Sure, the expanding network effect is nice, but many investors miss the fact that Ritchie Bros. Financial Services can now be extended to IronPlanet customers as the two combine. Ritchie Bros. just recently announced it acquired the remaining 49% of Ritchie Bros. Financial Services, and as it expands the latter, it could become more impactful on the company's bottom-line earnings.

Another overlooked aspect is that IronPlanet's business will be positively impacted by Ritchie Bros.' more established tax planning. On the flip side, Ritchie Bros. stands to benefit from some of IronPlanet's tax loss carry-forwards. Both of those factors should help juice the bottom line.

Investors shouldn't forget that this essentially takes a threat to Ritchie Bros. and turns it into an opportunity. One of the knocks against Ritchie Bros. in the past has been that start-up companies such as IronPlanet could take market share quickly through innovative online-only auctions. Ritchie Bros. was working diligently to build out its online presence -- and as you can see below, to a decent amount of success -- but acquiring an innovator in online-only auctions will certainly accelerate that process. 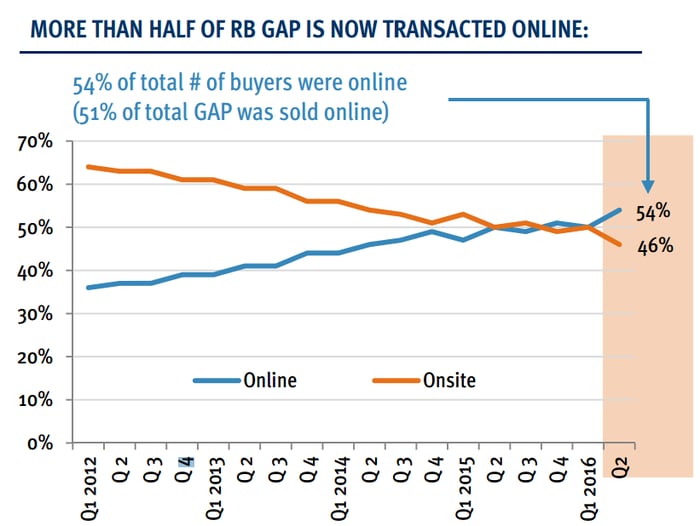 Consider that IronPlanet brings an online database of more than 1.5 million users with bidder tracking and a network of equipment inspectors for equipment sold online. This acquisition will fit nicely into Ritchie Bros.' forward-looking strategy of online auctions.

Looking at the specifics, Ritchie Bros. agreed to purchase 100% of IronPlanet  at 13 times 2017 estimated EBITDA. Ritchie Bros. has said all along that it would aim for transactions that would be quickly accretive to earnings, and management expects this transaction to be accretive within the first year, excluding acquisition related costs.

As with any no-brainer acquisition, there are cost synergies to be realized after the deal is closed. Management expects annual synergies of about $20 million to be achieved by 2018 and that NPV of tax synergies will be about $100 million.

Fortunately, for investors concerned about the cost of the transaction, Ritchie Bros.' balance sheet was solid. In 2013, net debt to adjusted EBITDA was 1 times and that level dropped to 0.6 times in 2014 and 0.5 times last year. Now, as Ritchie Bros. takes on debt to finance the purchase, its debt will jump from about $125 million at the end of the second quarter of 2016 to roughly $850 million when the deal closes in the first half of 2017. That would equate to a net debt to adjusted EBITDA of 3 times, which management believes will shrink back down to 2.5 times, the company's evergreen target, shortly thereafter.

Honestly, if you're invested in a company that has a solid balance sheet within a fractured industry, this is exactly the type of acquisition you want to see. It checks the boxes in just about every way: expands the company's online presence, enables annual cost savings and synergies, provides a key strategic partner in Caterpillar, and will quickly become accretive to earnings. For those reasons, it's no surprise Ritchie Bros.' stock soared on Tuesday.