The combination of a rich collaborations pipeline and a discount to growth make Celgene a fantastic long-term holding. While the past few months have been good to Celgene (CELG) investors, shares are still down about 11% year to date, dramatically underperforming the broader market. 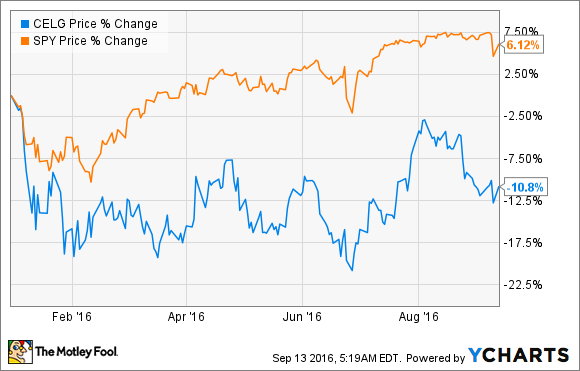 In spite of this, Celgene has continued to execute on its long-term vision of accelerating growth, filing four new investigational drug applications year to date.  With blockbuster drug Revlimid continuing to put up excellent growth numbers and new autoimmune treatment Otezla growing in the triple digits, I believe this rare pullback presents a solid buying opportunity in one of the fastest-growing companies within the large-cap biotech space. Without further delay, here are five reasons Celgene is a buy.

Celgene has one of the best growth trajectories among the large-cap biotech cohort. In the most recent quarter, net product sales grew 22% year over year. Therefore, while Celgene may look pricey at a 45 times trailing 12 month P/E, it is really the forward P/E that matters -- and in this case, Celgene is only trading at 15 times next year's earnings. Celgene also trades at a five-year PEG ratio of 0.85. A PEG ratio below 1 is generally a signal that investors are paying less in price for a stock than what its growth potential should command.

Celgene's revenue stream is impressively diverse. Its crown jewel is Revlimid, an oral treatment for blood cancer indicated for use in first- and second-line multiple myeloma. In 2015, Revlimid brought in $5.8 billion dollars in revenue and accounted for 63% of total sales. While these are astounding figures, and Revlimid sales continue to grow at double-digit rates, it is never a good thing to see a company rely on a single product to drive future growth. For this reason, it is nice to see Celgene diversifying its future revenue streams with growth in its other products: Abraxane, Pomalyst/Imnovid, and Otezla. Celgene's oral autoimmune treatment Otezla in particular is growing rapidly -- up 170% year over year in its most recent quarter -- and is well on its way to billion-dollar blockbuster status.

In 2015, Celgene paid $7.2 billion to acquire Receptos and get its hands on Receptos' leading product candidate, ozanimod. Ozanimod is an oral S1P1 receptor antagonist currently being studied in a host of autoimmune diseases. Ozanimod's phase 3 pivotal multiple sclerosis trial is already fully enrolled, and its phase 3 pivotal for ulcerative colitis is currently enrolling patients around the globe. Peak sales estimates for ozanimod are between $4 billion and $6 billion, which will make the Receptos acquisition look like a steal if everything works out.

Celgene has also proven itself committed to rewarding its long-term shareholders by adding to its generous share repurchase program. In the first half of 2016, Celgene repurchased nearly $1.8 billion in outstanding shares and in June authorized an additional $3 billion for share buybacks. This leaves a total authorized amount of $5.1 billion as of the end of Q2. Buybacks are often an indicator of management confidence and this large buyback authorization suggests Celgene believes their stock to be cheap.  Share buybacks benefit long-term shareholders by decreasing the number of share outstanding.  This has the net effect of increasing EPS or earnings-per-share.

Finally, an investment in Celgene is really an investment in dozens of other companies, as well. Celgene is currently partnered with over 30 external collaborators in research and development projects, ranging from oncology to immunology and inflammation. One particular collaboration of note is with Acceleron Pharma (XLRN) on drug candidates luspatercept and sotatercept, for myelodysplastic syndromes/beta-thalassemia and chronic kidney disease, respectively. Luspatercept is currently in a phase 3 trial for beta-thalassemia, with the goal of reducing or eliminating the need for blood transfusions in anemic patients. While Celgene is paying 100% of development costs for both of these products, it stands to gain from a co-promote agreement within North America for a drug in a potentially billion-dollar indication. Acceleron, meanwhile stands to receive low to mid 20% royalties as well as $315 million in milestone payments and another $230 million for successful commercialization. For a company with a market cap just over $1 billion, the vote of confidence from Celgene in its clinical pipeline is essential. Meanwhile, this is just one example of dozens of shots on goal for Celgene. Regardless of how any single partnership pans out, I am confident that Celgene's collaboration pipeline as a whole will churn out profitable partnerships for years to come.

The powerful combination of rapidly growing revenue streams, a large share repurchase program, and a low valuation relative to growth makes Celgene an enticing stock looking forward. Considering Celgene's past history of success and numerous collaboration shots on goal, investors looking for a long-term holding would be wise to take Celgene into consideration.