Please ensure Javascript is enabled for purposes of website accessibility
Log In Help Join The Motley Fool
Free Article Join Over 1 Million Premium Members And Get More In-Depth Stock Guidance and Research
By Evan Niu, CFA – Sep 15, 2016 at 10:30AM

Spotify is way ahead of the tech titan -- and growing faster, to boot.

More importantly, Spotify is adding customers at a much faster rate in absolute terms. The company has now doubled its large base of paying subscribers in just 15 months. In June 2015, Spotify hit 20 million subscribers, subsequently crossing 30 million in March of this year. Apple Music officially launched in June 2015 as well, but initially began as a free three-month trial. The billing kicked in starting September 2015, and Apple announced shortly thereafter that it had about 6.5 million paying subscribers. 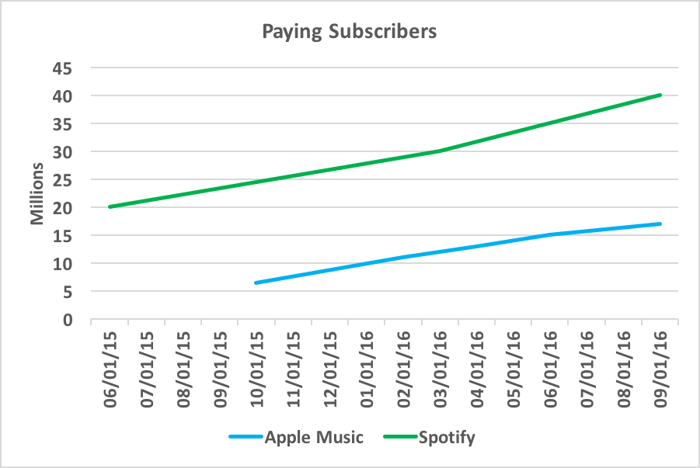 As it stands, Spotify's paying user base is twice the size of Apple Music's. That's just the company's paying users; Spotify's total active user base as of June 2016 was over 100 million including ad-based users. Apple Music has no free tier beyond the three-month trial.

While growing to 17 million subscribers is solid, it's actually less impressive than you might think. Not only does Apple have an installed base of over 1 billion devices at this point, the company opened up Apple Music to Android last year, making it one of Apple's few cross-platform service offerings. Considering the size of the market that Apple is targeting, 17 million is actually just a drop in the bucket. Apple has now redesigned the Apple Music interface in iOS 10, addressing one of the more prominent criticisms of the service since the initial design was confusing.

Meanwhile, Spotify has cemented itself as the industry leader by a healthy margin. Even Pandora (P) is preparing to enter the on-demand streaming market, recently inking the requisite licensing agreements with the major record labels. Pandora's user growth -- both ad-based and paid -- has been stagnating for quite some time. Total users were 78.6 million at the end of June, of which only 3.9 million were paid subscribers (unchanged from a year ago).

Earlier this year, Spotify actually said Apple Music's launch has helped Spotify's trajectory, raising awareness and interest in streaming music. It looks like it's going to be hard to put a dent in Spotify's growth.