Tata Motors (TTM -0.97%) reported earnings for the first quarter of its 2016-17 fiscal year. The company continued to show strong momentum and followed the report up with across-the-board strong sales numbers for August. Here is what investors need to know from the slew of information released.

The last quarter in review

Total revenue for Tata Motors was up 9.2% during the quarter compared with last year. Profit as measured by earnings per share was down 57.9%. However, this performance is largely due to a one-time sale of investments for a profit in last year's quarter as well as increased expenses this year. Excluding the one-time profit from last year's quarter, profit is down 54.4%.

Tata sales benefited from a growing Indian economy, with annual GDP on pace to grow well over 7% this year. The big bump is due to government spending on infrastructure, which has helped sales of Tata's commercial and municipal vehicle lineup.

Exports to other countries in Asia also improved over last year. During the summer of 2015, the Chinese economy sputtered and spending fell. That performance had an impact on the company's exports of both commercial and passenger vehicles. The picture has continued to improve this year, and Tata's newly released Tiago hatchback has helped with the numbers as well.

Moving to the Jaguar Land Rover division, sales were mainly boosted from the release of new models. Most notable among them has been Jaguar's first ever SUV, the F-PACE. Available in May earlier this year, the new vehicle quickly shot to the No. 1 best-seller for Jaguar.

It was a great start to a new fiscal year for the company, but it was acknowledged that the Indian business has bumped up against some headwinds since June. The summer months for us in the United States mark the beginning of heavy rains in India. For the past few months, sales of commercial and municipal vehicles have tailed off as a result.

With the company's year off to a strong start, is the trend a sustainable one?

The road map for the rest of the year

Tata Motors sees growth continuing at its current pace for the rest of the year. The company sees sales getting bolstered by a growing economy in India, spending in Asia that's set to bounce back from last year's declines, and new vehicle designs.

To address the weakness in Indian domestic sales of commercial vehicles, the company reiterated that it sees growth for the rest of the year, post-monsoon season. The government's elevated spend on infrastructure is expected to keep driving replacement demand for existing commercial fleets. India is also adopting new emission standards to bring the country up to par with Europe's standards by 2020. Toward the end of 2016, the company sees purchasing ramping up before the new emission standards are adopted.

A couple of months into the second quarter, and the trend set in the first quarter has been continuing. August sales numbers for Tata showed a 5.8% increase over last year in spite of the heavy monsoon rains. Exports provided the biggest boost by increasing 26.5% year over year.

Driving exports in passenger vehicles is the Tiago hatchback. Sales of the sporty little car have been strong, and the company expanded its reach when it released it for sale in Nepal in August. Commercial vehicle sales have helped as well, with two new models announced for the big Indonesian market in late August as well.

New models for Jaguar Land Rover are helping win new business. July was a best-ever month for the division, and the company followed that performance up by reporting a best-ever August as well. During the month, sales increased 26% from last August, and Jaguar provided the biggest bump, with sales more than doubling.

The big increase came again from new models, most notably the Jaguar F-PACE. Sales were also strong for the Land Rover Discovery Sport and Jaguar XE. With the F-PACE just recently released for sale in China, the company sees strong sales growth continuing.

Tata Motors has given investors a lot to be excited about this year. The sales growth has helped boost the bottom line, and share prices have climbed over 40%. But can the trend carry share prices higher? 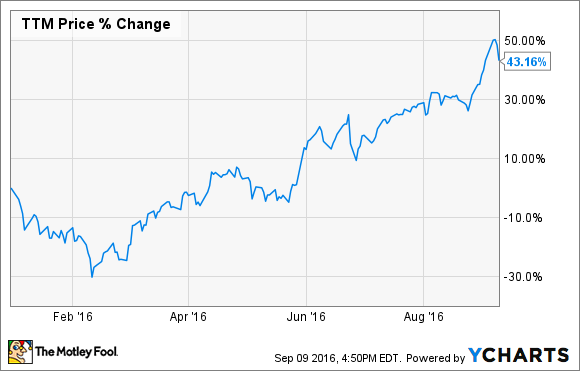 For the time being, it appears that it is. The Indian business continues to benefit from government spending and logged an advance order of 5,000 new public transit buses earlier this week. Advance production of vehicles in August also showed a 10% gain over last year, indicating demand continues to strengthen.

Tata Motors releases monthly sales and advance production figures for each month on its website. Investors should monitor these for any signs of weakness. In the meantime, though, I think the shares look attractive as sales continue to recover from the slump in 2015 and the company's projection for continued growth through the rest of the year.