Palo Alto Networks recently closed the books on its fiscal year 2016. We review its biggest achievement over the last twelve months. 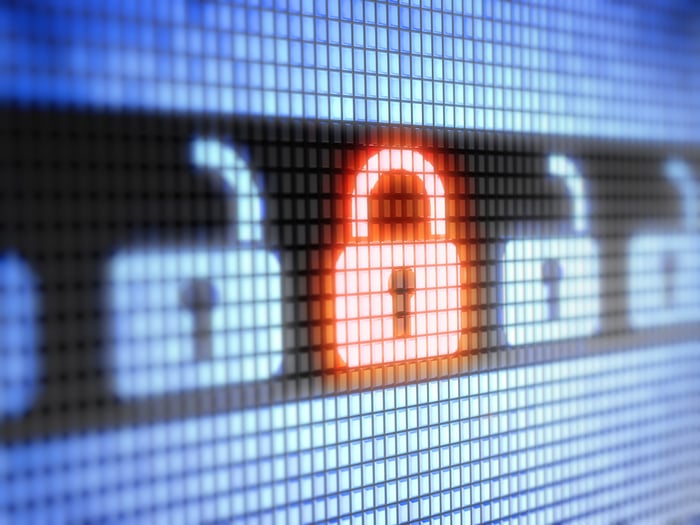 Getting a handle on revenue components

To understand why Palo Alto's changing revenue mix is so vital, shareholders should first understand how the company recognizes earned revenue. Like many software companies, Palo Alto records revenue on its income statement, and deferred revenue on its balance sheet, while also reporting a "billings" metric to investors each quarter.

"Revenue" is easy enough to grasp. It's work performed during a specified period, which a corporation has the right to invoice a customer for and expect payment.

The definition of "billings" can change from company to company. Palo Alto uses a fairly standard definition, in which billings represent the total amount recorded as revenue during a period, plus the change in deferred revenue. The point of looking at billings is that they give an investor a quick reference point to gauge that both revenue and deferred revenue are expanding at a healthy pace.

Now that we've defined these four key terms, let's view a chart which compares their growth rates over the last year:

An initial observation is that these figures are very characteristic of a software company in high-growth mode. Palo Alto enjoys extremely fast revenue expansion, and even faster growth in billings.

Two charts below, included in Palo Alto's most recent investor presentation, provide more clarity on the company's evolving revenue mix. First we have a five-year view of billings: 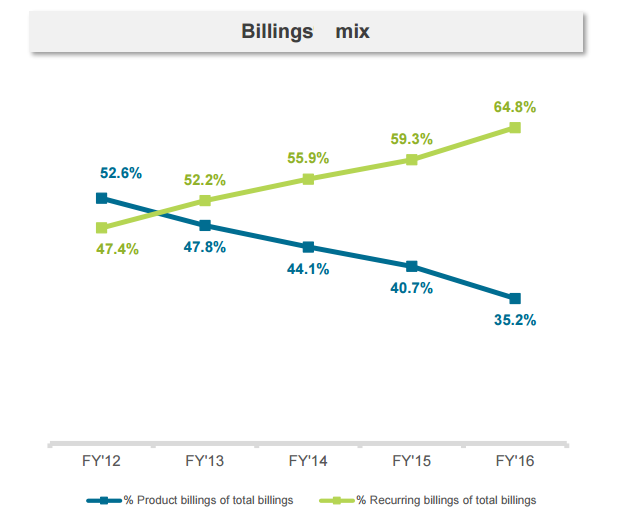 Next up is a similar but more broad-based chart -- the comparison of product revenue and recurring revenue over the last five years, with a projection into 2017: 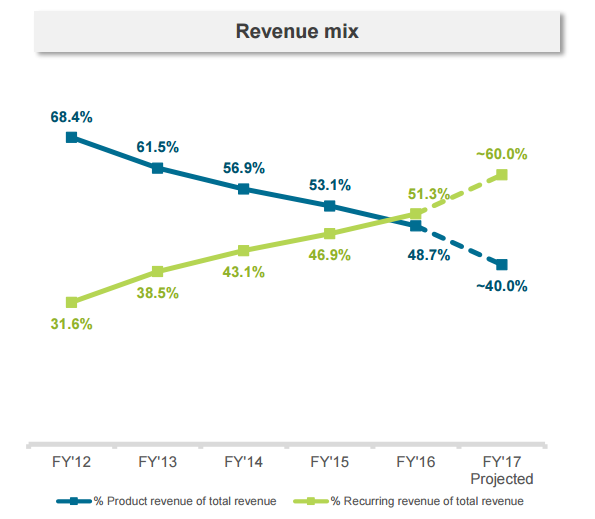 What can we make of these two images? First, recurring billings overtook product billings several years ago, as Palo Alto successfully transitioned its customers from being product buyers to buyers primarily of services, re-upping at regular intervals.

In 2016, total revenue also crossed this watershed, as the second chart shows. Moreover, recurring revenue is projected to make dramatic gains within the total revenue mix in the current (2017) fiscal year. This crossing-over is the critical-mass event which stands as Palo Alto's big achievement of the last twelve months.

To be more specific, billings, revenue, and deferred revenue are all being propelled by the growth in subscriptions for Palo Alto's services. A telling example of this phenomenon is WildFire, Palo Alto's automated malware-analysis engine. Subscribers to this service receive file analysis, threat detection, and prevention, all of which are continually improved by what the company terms the correlation of "community-driven threat intelligence" -- the crowd-sourced knowledge derived from threat analysis across Palo Alto's customer base.

With real-time, global updating of threat definitions, and automated response protocols when malware is identified, you can see how IT staffs would be hesitant not to renew this service each period.

According to Palo Alto CFO Steffan Tomlinson, subscription billings grew 72% in 2016. Longer-term subscriptions and renewals, as demonstrated by the bulging long-term deferred revenue account, have increased the predictability of Palo Alto's cash flows. And speaking of cash, shareholders should love the fact that free cash flow is moving in tandem with subscription growth: 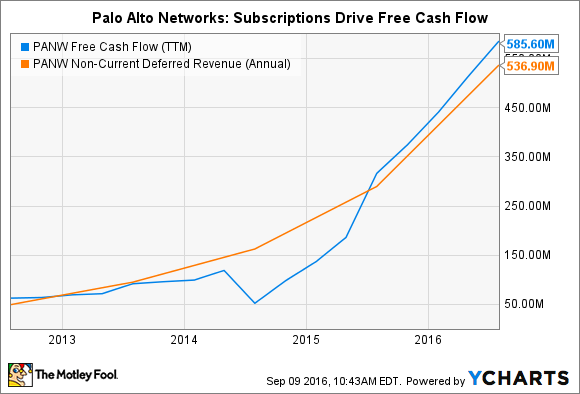 Summing up the advantages

The importance of the subscription shift isn't lost on management. In the company's fourth-quarter 2016 earnings call with analysts, CEO Mark McLaughlin pointed out several benefits:

In particular, the rapid growth in recurring services provides sustainable growth in both short- and long-term deferred revenue, increasing visibility into future revenue, higher operating margins over time, and high free cash flow generation. As a result, we are confident that we will continue to deliver high-revenue growth at scale for years to come.

Of the tangible advantages listed above, the "increasing visibility into future revenue" may be most important for investors. If you can see future sales clearly on the horizon, it frees up resources today to invest in innovation, undertake sensible bolt-on acquisitions, and utilize funds to create additional revenue streams. That's a type of self-perpetuating cycle which only increases shareholder value over time.

Asit Sharma has no position in any stocks mentioned. The Motley Fool recommends Palo Alto Networks. We Fools may not all hold the same opinions, but we all believe that considering a diverse range of insights makes us better investors. The Motley Fool has a disclosure policy.

Where Will Palo Alto Networks Stock Be in 1 Year?
349%