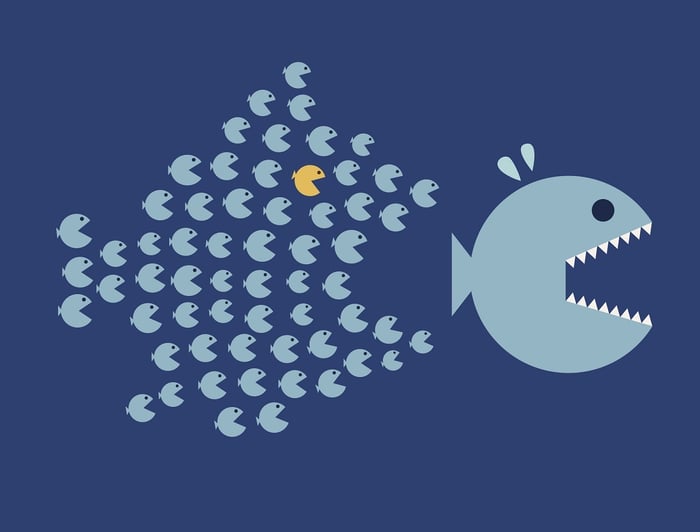 Carl Icahn's story as a shrewd investor started in college, where he learned to play poker with wealthy cabana owners in the Rockaways, collecting $2,000 a summer by his recollection -- equivalent to roughly $18,000 today.

He parlayed his analytical abilities to arbitrage trading -- exploiting price differences across different markets -- and then moved into shareholder activism, buying large stakes in companies and then seeking to force changes that he believed would increase shareholder wealth. From low-stakes table games to high-stakes activism, Forbes estimates that Icahn built a net worth of $16 billion by early 2016.

Icahn has to publicly disclose his personal investments each quarter, giving the public a rare glimpse into which stocks he likes. Based on his investments, which include his own Icahn Enterprises (NASDAQ:IEP), investors can get a better idea of Icahn's general investment style.

Here are three things we can learn from Icahn's personal portfolio.

If anything sticks out in Icahn's portfolio, it's this: Outside of the publicly traded company he manages, Icahn Enterprises, most of his individual stock positions were purchased in the last two years. An analysis of his holdings reveals that most of his holdings have been in the portfolio for no more than 18 months. 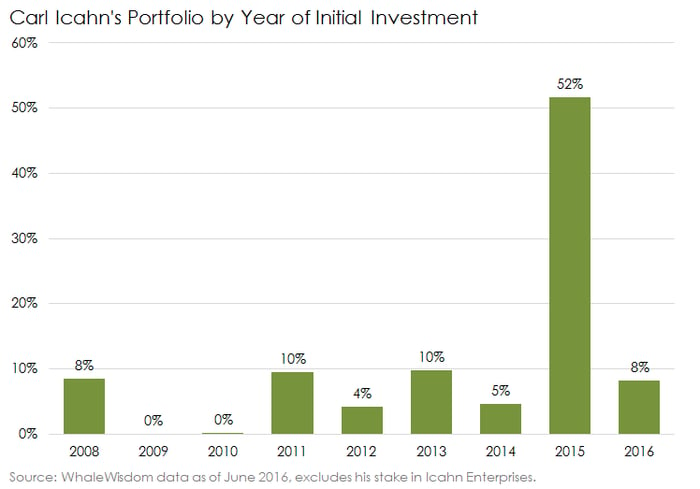 This certainly doesn't diminish Icahn's reputation for taking large stakes in companies just to make a quick buck. Many activists, Icahn included, often pressure target companies to use cash or borrow money to buy stock, which can result in a short-term pop in the share price. Therefore they're often derided for caring more about short-term profits than the viability of a business over the long term.

But the truth is that for Icahn, this strategy has worked. We'll look at a few of his biggest winners below.

If Icahn adds a stock to his portfolio, then he probably has some strong conviction behind his purchase. Notably, his three-largest investments -- Icahn Enterprises, AIG, and PayPal -- made up more than 50% of his portfolio, which recently included just 21 different stocks.

Even if we exclude Icahn Enterprises, which makes up roughly 33% of his portfolio, there are obvious signs that Icahn likes to bet big on his "best" ideas, particularly where public activism is a key component. Excluding IEP, Icahn's next three largest investments -- AIG, PayPal, and Cheniere Energy -- made up approximately 36% of his portfolio and had a combined value approaching $4.9 billion as of June 2016.

Icahn purchased stakes in each of these companies with the intent of forcing changes. He has publicly called for AIG to split into several smaller insurance companies, believing that the sum of the parts would be worth more than the whole if managed independently. Similarly, PayPal is a trophy of an activist campaign. Icahn advocated splitting PayPal and eBay into independent companies -- and that split came to pass.

Icahn bought into Cheniere in 2015, believing the company could more quickly return cash to shareholders. Cheniere has since slashed its capital expenditures plans, and its CEO stepped down -- an event for which Icahn later took responsibility. However, whether or not Cheniere will prove a successful investment is still up in the air, as the stock has lost 33% of its value due to falling energy prices.

Icahn likes to invest heavily in his best ideas and engage in extracurricular activities when it may lead to big returns on an accelerated timeline. He doesn't hesitate to suggest that his target companies spin off some of their operations, put themselves on the auction block, or pay out big dividends to shareholders if he thinks it will increase his returns and reduce the wait for a profit for himself and other shareholders.

3. Activism is central to his strategy

Frequent trading and a concentrated portfolio correspond with Icahn's core strategy of activist investing. Icahn primarily takes ownership of companies with the goal of advocating -- sometimes very strongly -- for changes at a company in an effort to increase its stock market value.

That said, not all of Icahn's past investments have required activism for Icahn to haul in large profits. Icahn famously acquired a substantial stake in Netflix in 2012. A filing with the SEC documenting his purchase noted that Icahn believed "Netflix may hold significant strategic value for a variety of significantly larger companies," implying that Icahn thought it could be a good acquisition candidate. The filing went on to say that Icahn had reached "no conclusion" about the ways the company could increase shareholder value.

Icahn didn't need to do any deep thinking to reap a profit. Netflix shares quickly rose in value, and Icahn made at least $1.6 billion on the investment by 2015, according to an estimate by Bloomberg.

Activism is a strategy that inherently requires deep pockets. A company's management can easily disregard an activist who holds a small number of shares. A billionaire who owns a high single-digit or low double-digit percentage of the company is not so easily ignored. For this reason, Icahn's strategy is simply out of reach for individual investors.

However, that doesn't mean there isn't plenty to learn from Icahn, nor that it isn't advantageous to have him or your side. Though no one should blindly follow any investor into an investment, Icahn's quarterly filings are certainly worth a few minutes of study to see if he has spotted any bargains that you find attractive, too.